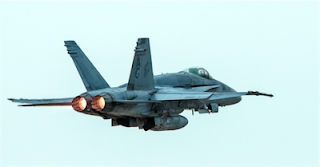 The DeKalb Airport has runways long enough for Lear Jets, MIG-21s, and FA-18s, and touch-and-go with a stopover is not contrary to the Articles of War.


At least, that’s what Ashley Bell, who works as a line service technician at the airport, told [editor Eric Olson] this week.

“It was like a training mission kind of thing,” Bell said. “[The pilot] came out here to visit his family and then went back to base.”

Bell said the pilot was a Navy lieutenant who flew the jet from his base in Norfolk, Va. He landed in DeKalb late in the afternoon Jan. 26, then took off again Sunday around noon. The flight time from here to Virginia is about an hour when you’ve got afterburners, he said.

Going west, you can take off at noon (Eastern) and land before noon!
Posted by Stephen Karlson at 23:09