The winter that began with very little snow, and the first serious snow of late January giving way to warmer temperatures in DeKalb than in Silicon Valley on at least one day.  Late February and early March brought what the weather forecasters refer to as an "active pattern."  There's plenty of drought relief piled up, and two partial snow days for the collegians.  The commuters were not pleased with headquarters deciding to call Tuesday classes off from 12.30 on.  The residential students used Facebook to organize a snowball fight. 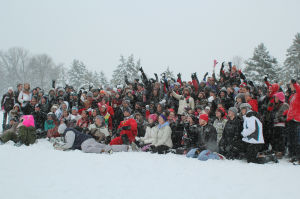 Posted by Stephen Karlson at 17:06