AN OPEN DAY WITH GRAMPA IN THE FUTURE? 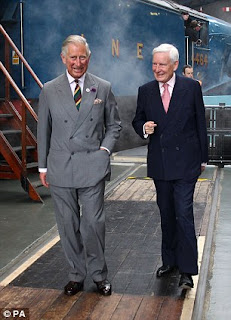 The prince had to return to London for some family business later in the day.  The article notes he has more than a passing interest in things that run on rails.


Prince Charles is a keen rail enthusiast and earlier this year took a trip on the London Underground to celebrate 150 years of the Tube.

He also spent some time in the cab, er, on the footplate of a Stanier Pacific assigned to the Royal Train somewhere in the northwest.

We await the breach of protocol when the new Prince of Cambridge says "There's the Great Western Way, and the wrong way."
Posted by Stephen Karlson at 11:12