Yesterday offered an opportunity to visit the threshing bee and the Boone County Fair in one day. 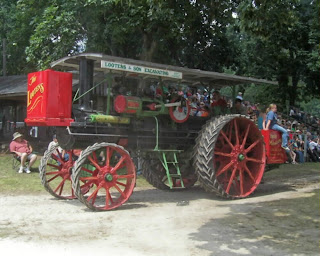 Big machinery, such as this 1918 Minneapolis traction engine, is my usual rejoinder to anyone who looks askance at model railroaders.  Imagine storing, transporting, and maintaining this.  You probably can't get fittings at Ace Hardware. 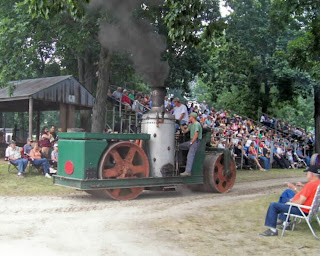 Once upon a time, steamrollers really WERE steamrollers.  Some stunt, steering one with a sailboat tiller. 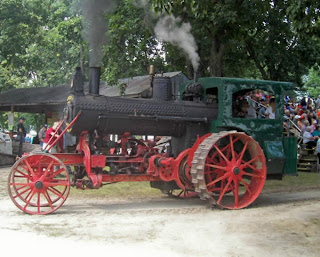 There's more than a little railroad influence in the design of this tractor. 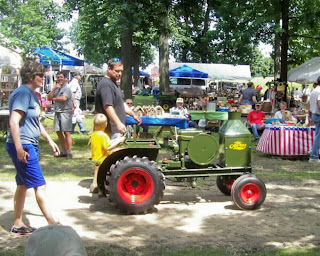 That's the next generation at the helm of the Oil Pull.  I don't know whether it's a stock smaller unit (there were, apparently, steam-powered precursors of the lawn tractor, years ago) or a half-scale model. 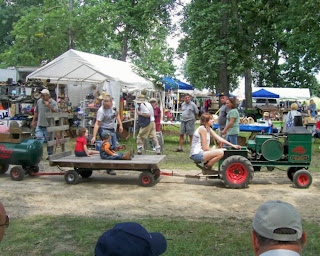 Leave the driving to the kids seemed to be the theme among Oil Pull owners, though.  Small hay wagon and small tank in tow. 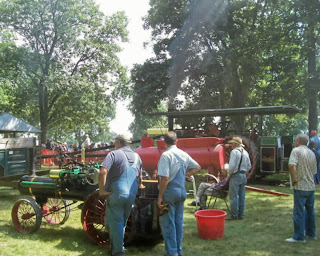 Here a model traction engine and a full-sized original serve as stationary engines. You have to be careful as operator or as spectator, as the power take-off doubles as a flywheel on many of them, and it's spinning whenever the throttle is open, whether a load is attached or not.

At the Boone County Fair, Thursday must have been Judging Day for Horse Handling. 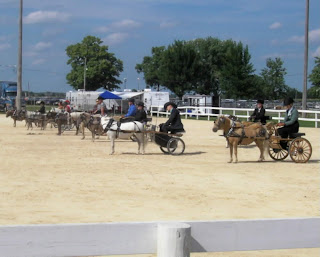 Here, the Pony and Trap class await the awarding of ribbons.  I'm sure there are well-established standards for evaluating the animal's gait, the driver's interaction with the animal, the precision of the turning or backing up (yes, you can back up a horse or a team and the associated wagon), and whatever other criteria the governing body comes up with.  My eye is not practiced enough to tell the difference. 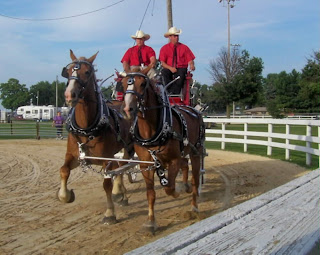 And yes, the beer truck is probably a productivity enhancement.  Two work-horses at the trot with a beer wagon behind are pretty impressive all the same.  The competition is still with empty wagons (all built to what look like the same plan, but lettered differently).  As of yet, there is no competition with wagons fully laden with beer kegs. 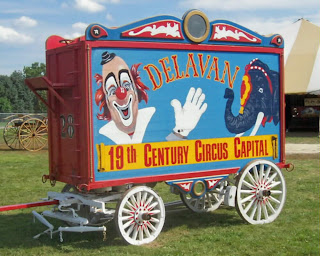 I can't tell you anything more about this Delavan Tableau Wagon 28 that was near the pony tents.  Perhaps one of the circus modelers I will see at the weekend knows something.

Lots of good food, so much that I decided I was too full to purchase a cream-puff.
Posted by Stephen Karlson at 16:33