THE POLITICAL ECONOMY OF CHARTS.

The middle class is not all moving into cardboard boxes on Skid Row. 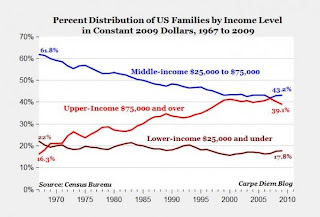 Visual from Greg Mankiw who obtained it from Mark Perry.

The federal government's fiscal position has been rapidly improving.

Angus at Kids Prefer Cheese got it from the Financial Times Alphaville.  The macroeconomics dissertations have yet to be written.


If  we had been better Keynesians in the past, we would have used the "boom and not the bust" for "austerity", and could have run an expansionary policy longer. But in the absence of a proven connection between fiscal stimulus and sustainable job growth (sorry Brad and Larry), and the presence of our high and still rising debt levels and the continual damaging political theatre around debt ceiling breaches, I am fine with this rate of deficit reduction.

What is not so great about the deficit reduction we are getting is that it doesn't address longer run budget issues, and the deficit is projected to start rising again in 2015 and get ugly shortly thereafter.

Also at Kids Prefer Cheese is a chart suggesting there are still plenty of discouraged workers. 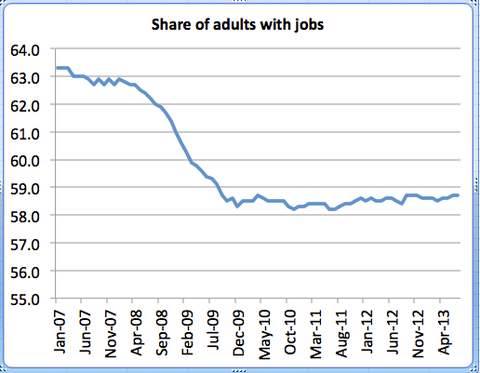 From Mahablog comes a Business Insider essay by Jeff Bezos suggesting corporations are holding onto cash rather than hiring workers. "[T]he profit maximization obsession of American corporations is actually starving the rest of the economy of revenue growth." A longer time series of the employment ratio suggests "As a result of frantic firing in the name of "efficiency"  and "return on capital," the U.S. employment-to-population ratio has collapsed." To Mr Bezos, the downsizing and restructuring and outsourcing have not produced productivity gains.


In short, the obsession with "maximizing short-term profits" that has developed in America over the past 30 years has created a business culture in which executives dance to the tune of short-term traders and quarterly earnings reports, instead of balancing the value created for employees, customers, and long-term owners.

It might take another thirty years for social science to come up with a plausible, replicable analysis of the failures, or not, of corporate restructuring, or of whether the current administration's fiscal and social policies are triggering a capital strike, or if a foundation is now being built for future prosperity.
Posted by Stephen Karlson at 13:59

When I saw that chart on Perry's blog, I smiled.

There is a wealth of folly for the mocking, but as concerns his thesis, he could at least go to the intellectual effort of discussing principal-agent problems, monitoring costs, concentrated benefits and dispersed costs, yada yada yada...

I sincerely hope that he is told, often, that he doesn't "understand economics," or, in the parlance of our times, "Fiduciary responsibility, how does it work?"

I am rather perplexed by your reply, as I cannot see the relevance to my specific comments. How are the incentives faced by the owners and management of firms to be aligned with Mr. Bezos's preferences?

In the worst-case, Keynesian, paradox-of-thrift scenario, it is still rational for individual actors to contract spending -- in a sense, a macroeconomic tragedy of the commons. Moreover, I saw little reason to read into Mr. Bezos's article such relatively sophisticated thinking about aggregate demand, the velocity of money, etc. His was a discussion of corporate culture, American business sensibilities, etc.

Perhaps I go a bridge too far in saying so, but telling firms to spend for the common good smacks of "hoarders-and-wreckers" rhetoric. On the other hand, telling firms what is in their own best (long-term) interest just seems likes financial and economic hubris...

That's simply describing how a law of conservation (or accounting identity, if you will) works. Mr Bezos goes beyond the accounting identity in prescribing that employers pay workers more. He's correct, though, that suppressing wages in order to obtain profits has a knock-on effect on economic growth, and ultimately on profits.

Again, I do not actually disagree with anything that you have said. My criticism pertained solely to Mr. Bezos "going beyond": Where is the discussion (by Bezos) of the microeconomic incentives facing firms, management, households (who face many similar pressures), etc.?

Perhaps I have mislead by not specifying focus on the article itself, as opposed to the charts and quotes you selected for presentation.

I can't speak for Mr Bezos. His interpretation of the data might be correct. It is not the only interpretation. Thus my closing paragraph about further research.