Margaret Soltan has harsh words for beer-'n-circus at the University of Massachusetts. "They play the role of the freaks of this blog, the frenzied teetering muttering mad uncles of the American university family." That's after students celebrated the Red Sox win in the World Series in the way they're accustomed to.

Enjoying football victories is another matter.  Massachusetts has to have enough attendance, in a sufficiently large stadium, to qualify as a Division I, er, Football Bowl Subdivision team.  Damned if they do, damned if they don't.


Whether the team plays future games on campus will depend on how well it does at Gillette Stadium, the site of all UMass home games in 2012 and 2013.

"The more success we have in Foxborough, ironically, the less chance there would be of returning to McGuirk," [athletic director John] McCutcheon said.

But the option will exist, if current renovation plans come to fruition. McCutcheon said UMass is committed to the plan, but that it is in the preliminary phase.

"We are in a transitional period. By 2014, the plan is to have an upgraded campus facility that could host some games," he said.

UMass is undertaking a $20 million McGuirk improvement project. Seating will be expanded from 17,000 to 25,000, with a comprehensive training facility built at the stadium's north end.

McCutcheon said a major fundraising effort is aimed at paying for the project. If the full amount is not raised, "some debt service'' will be incurred by the university, he said.

If that sounds familiar, it should. The Mid-American Conference, which Massachusetts have joined, itself is on and off of the college football cartel's watch list for inadequate attendance.  Thus, to put more entertaining teams on the field, conference athletic departments have been upgrading their weight rooms and adding indoor practice facilities.  Huskie Stadium seats about 25,000 fans, and a new indoor practice facility just opened.  So Massachusetts has to have one.

Never mind that at their most recent home game in Foxborough, many ZooMass fans were at the Red Sox victory parade in Boston.  By game's end, a majority of the fans were Northern Illinois backers. 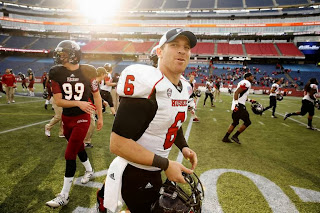 Northern Illinois fans aren't as geographically ubiquitous as Wisconsin or Green Bay Packer fans.  The paid attendance at the game (won 63-19 by Northern Illinois) was listed as around 10,000, although maybe a fifth of those were actually present.

I was able to listen to the end of the game on Chicago's AM 670, which reaches western Ohio on a good day.  The fan enthusiasm wasn't audible on the radio, although they come through loud and clear on the ESPN video.
Posted by Stephen Karlson at 19:39