These days, the Marktplatz in Nürnberg is a gathering place for tourists, and there are farmers' produce-stalls, eateries that serve triple brats (by law, a Nürnberg bratwurst must be able to fit through a keyhole, they're about the size of a breakfast sausage in the State Line), and taverns that brew their own beer. 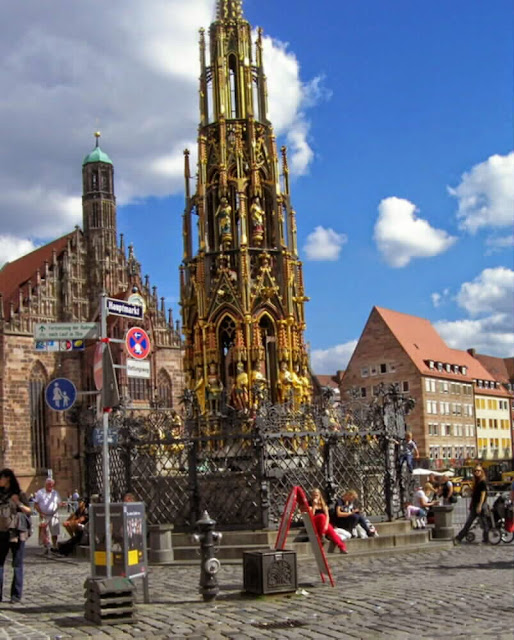 In the foreground, the Schönbrunn fountain, behind, the spire of the Frauenkirche.

The Frauenkirche clock puts on quite the show at noon.


The mechanism dates to the early sixteenth century. The seven Electors of the Holy Roman Empire thrice circle King Karl IV, turning to render their respects.

Put another way, though, you are looking at Regional Leaders of the First Reich paying homage to their Emperor.  Accordingly, the Marktplatz taking on the name Adolf Hitler Platz during the Nazi period has deeper significance.  At least until Nuremberg came under new management on Hitler's 56th birthday. 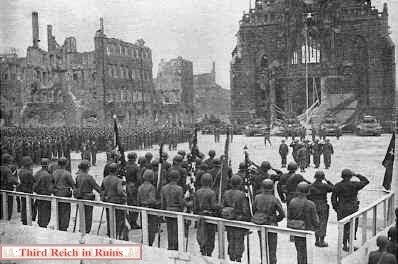 Outside the city walls are what remain of the Nazi Party Rally Grounds.  The never completed Congress Hall echoed the style of Rome's Colosseum, only on a larger scale. 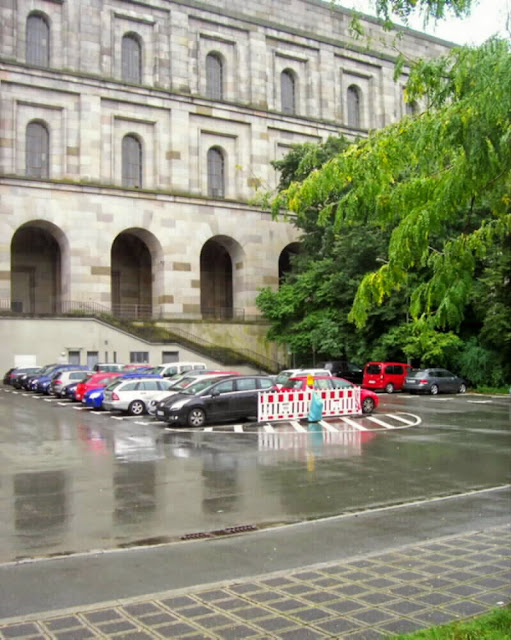 Had I gone further around the building to the right as in the photograph, I would have gone onto the grounds of the Nürnberg Folk Festival.  Had the weather been better, that's what I might have done, thus adding impressions of a German county fair to those I have posted for Illinois or Wisconsin.  But the jet lag and a train reservation that would get me to Hamburg at a decent hour triumphed.

The interior of the building, and the overall roof, were never completed.  The few renderings I have seen suggest it would have made a great set for the Borg.  A historical museum is at the end of one wing, and a recital hall for the Nürnberg Symphoniker at the other. 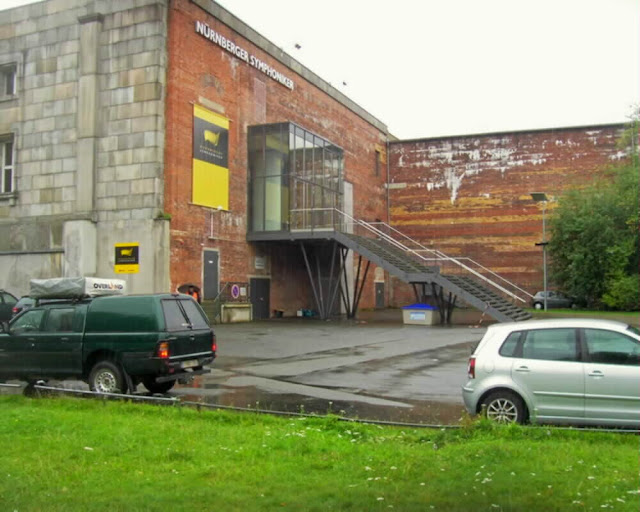 The hall is on the banks of a retention pond called Dutzendteich.  The weather militated against the paddle-boat rental stand opening, or any rowers or sailors practicing.  Note, though, at least one Laser in the boatyard. 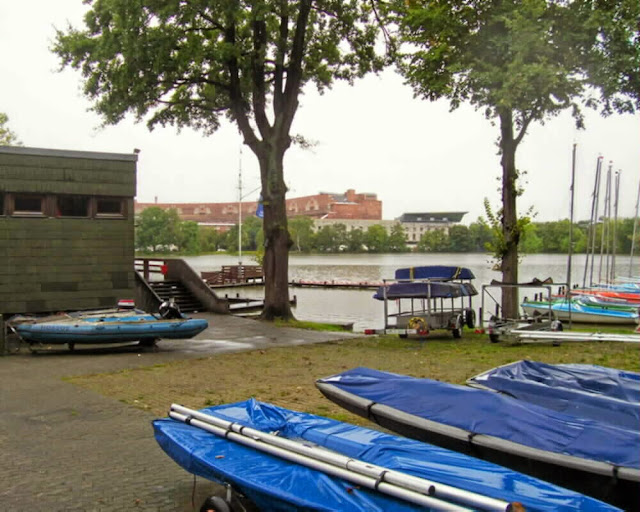 That's the Congress Hall behind.

Keep walking along the nature trail, and you get to Zeppelin Field.  (There are helpful guideposts and interpretive signs, in German and English.) 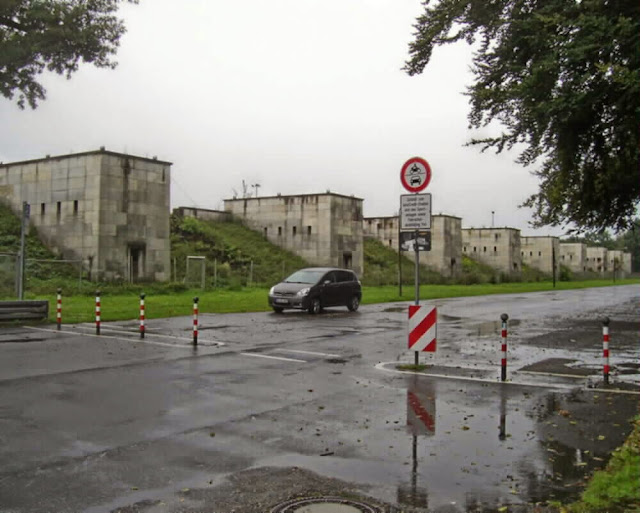 The grandstands on the opposite side of the street are in rough shape.  The towers have a military look about them, but existed to shelter toilets, and the electrical apparatus for the spotlights that illuminated the night skies during rally days.

Dignitaries had a more substantial reviewing stand, which is I think on the east side of the complex. 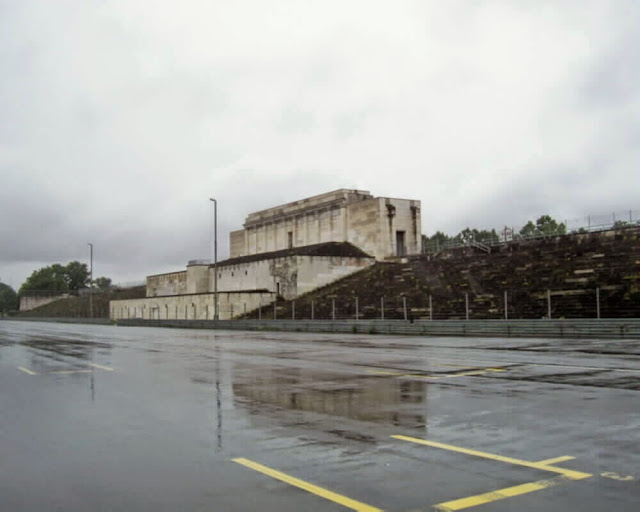 At one time, there were colonnades the length of the stand, which were removed as unsafe in 1967.  During Occupation, the complex was called Soldiers Field (perhaps because a G.I. from Chicago noted a resemblance to a facility on the lakefront subsequently ruined by the insertion of a giant commode between the columns?)

Ninth Army raised the Stars and Stripes, did a march-past, then blew up the swastika that once adorned the reviewing stand.

The reviewing stand is open for exploration, at your own risk. 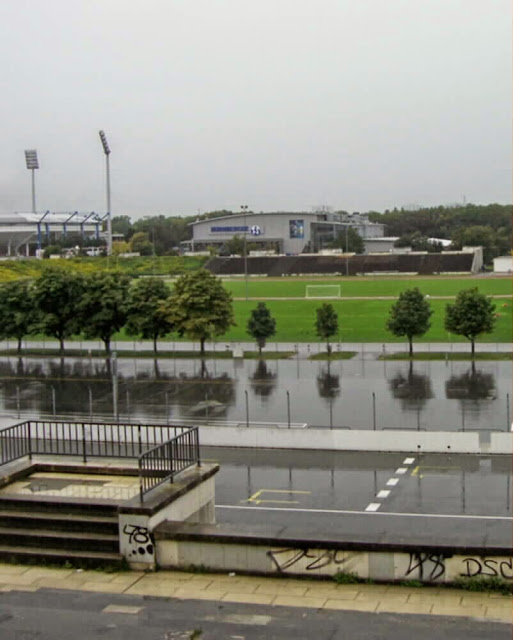 That's not the original speaker's platform.  A few seats in the stadium are usable; most are overgrown.  Behind the walls, the current soccer stadium, a sports complex; additional soccer fields where the Labor Service volunteers would do close-order drill with picks and shovels.

Nürnberg's government have a challenge in conserving these grounds.  To restore might send the wrong message.  To allow them to deteriorate to an unsafe condition might offer temptations to trespassers sympathetic to Hitlerism to claim the grounds as their own.

The night before was warm for late August, with fine weather.  At least one visitor (or party) had a rally of a different kind. 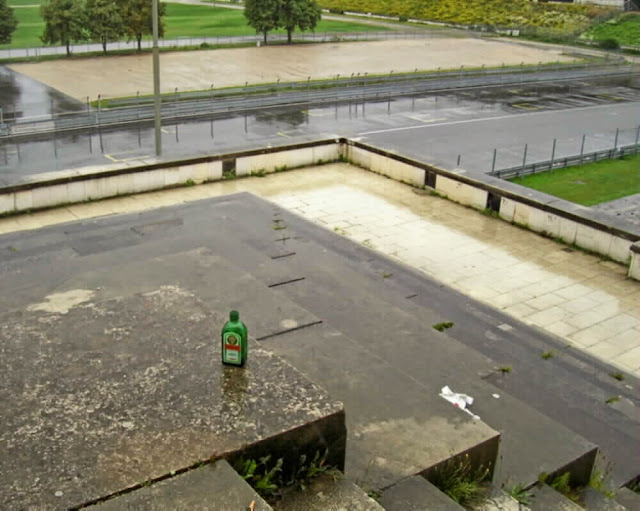 Wasn't me!  I had a pleasant encounter with some Austrians, also on holiday, at one of the eateries in the Old Town, that Sonnabend.  (And let me make the case for doing your overseas travel on your own or with companions of your choice ... make an effort to speak the language, mingle with the people, get a sense of what they enjoy doing.  The people on the package tours never quite get out of their bubble, and there's more to visiting a country than the pre-arranged meals, the art gallery, the up-scale shopping.  But that's material for a subsequent post.)

Elsewhere on the Party Grounds is the Luitpold Arena.  Here, the massed storm troopers would pledge their fealty.  An Army propaganda film that was ordered destroyed by Genl Eisenhower ended with one of the more dramatic transitions in propaganda movies.

A cut of Hitler and two cronies marching through the ranks; three GIs (the movie suggest they had walked from Normandy) on the empty field, then the swastika blown off the reviewing stand.

In contemporary language, that's spiking the football!
Posted by Stephen Karlson at 12:01