Word reached Cold Spring Shops, early in the summer, about the planned closing of Hoffman's Playland in Colonie, New York.  I accordingly worked it into the list of stops to make enroute Rockland for the Lobster Festival. 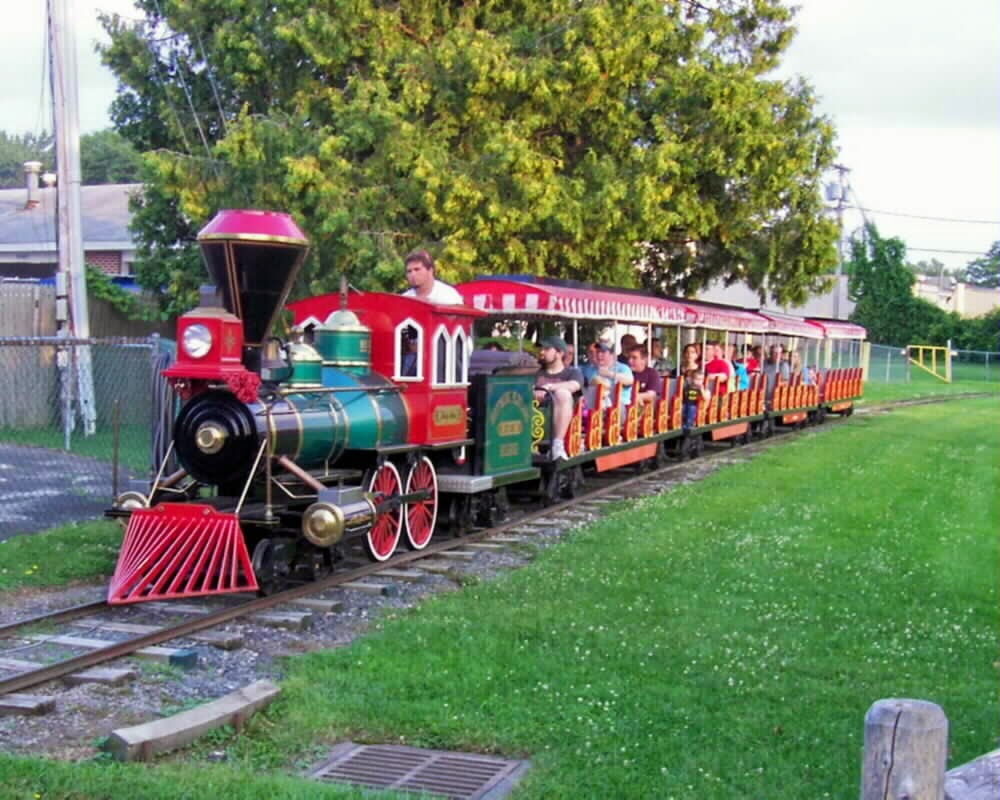 These trains with trucks that look out of place under anything other than an F unit are becoming fewer and further between. 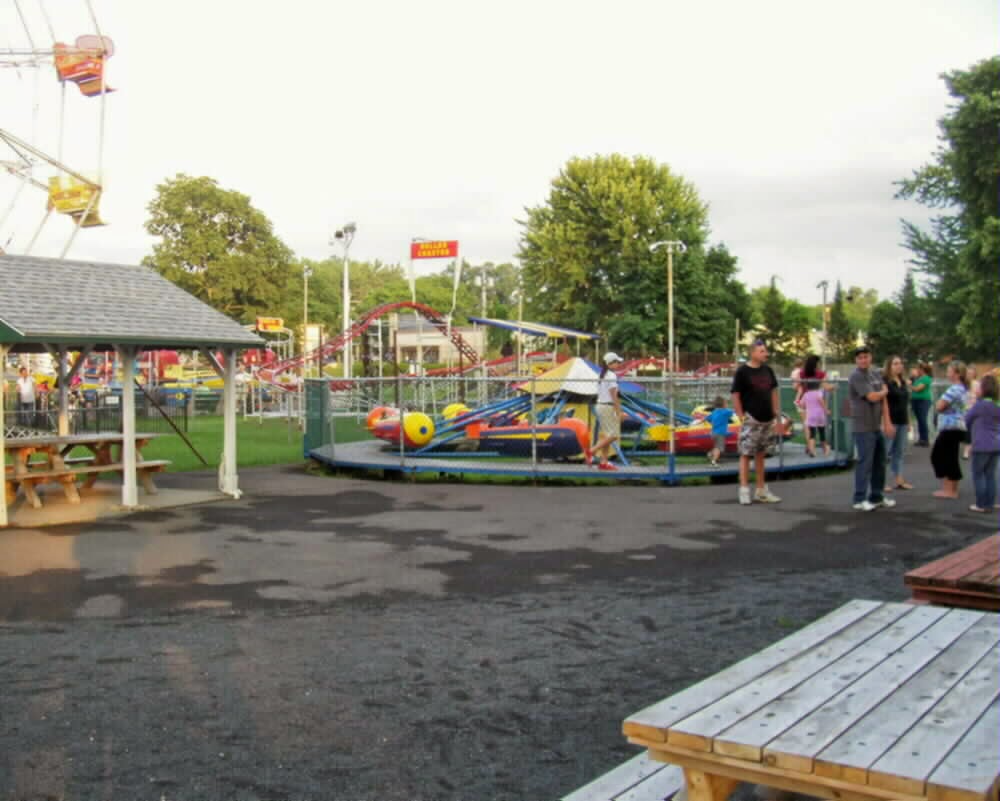 It's about 7 pm on a Thursday evening (July 31) and there are respectable crowds on the midway.  The junior roller coaster in the background apparently provided coaster enthusiasts with sufficient grounds to visit the park. 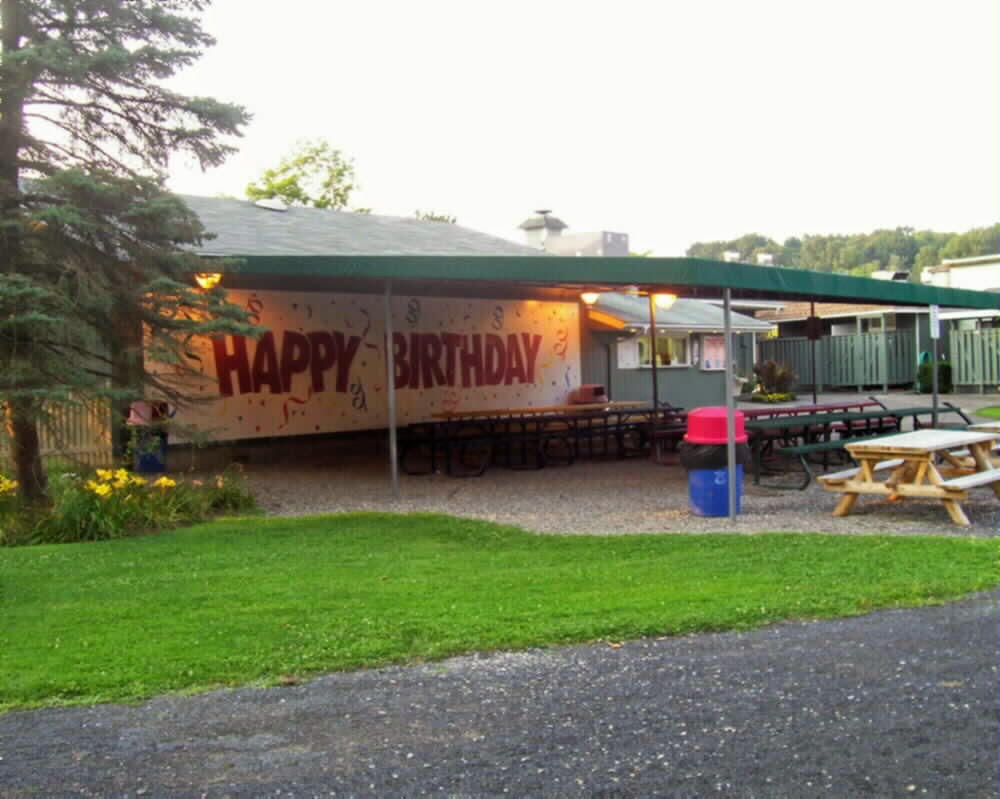 With the closing of the country's Kiddielands, the summer birthday party traffic, alas, is more likely to be diverted to the likes of Chuck-E-Cheese.  Jeeze. 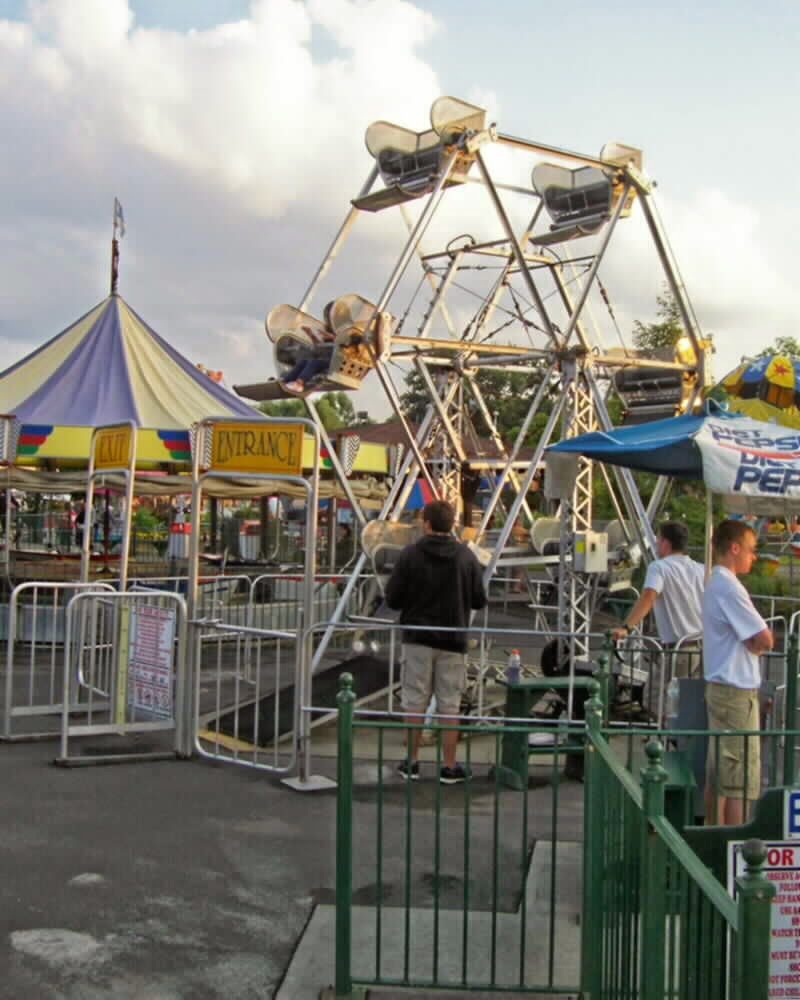 And there's a good stock of vintage Jacksonville Iron to be sold.  Here's a Little Eli, there is also a Big Eli and a Scrambler on the grounds.

The reason for the park's closing is familiar: the owners want to retire, and the land is more valuable in a year-round use.


The Hoffmans, who met at the playland, said last year that they wanted to retire and planned to close the amusement park that has been part of many area residents' childhoods and parenting memories. Petitions and a Facebook page called for saving the playland, which first opened in 1952. Efforts were made to find a buyer, but the Hoffmans wanted someone to move the equipment elsewhere so they could develop the valuable land on Route 9 where the playland sits.

The area is booming with retail and residential development including the $50 million Village of New Loudon next door that includes a mix of residences and retail outlets. That land is where David Hoffman's uncles once ran businesses including a driving range, a miniature golf course and a snack stand.

The golf facilities are long gone, and the stores and eateries appeared to be doing a good business the evening I was there.  The article suggests a buyer for the attractions in toto might be in negotiations; the planned auction of the equipment piecemeal has been postponed.

Today is the last day of operation at Hoffman's, and it is going to be going out busy, the same way the Melrose Park Kiddieland did five years ago.

Although northwestern Pennsylvania isn't experiencing the same kind of commercial activity as the Capital Region, Conneaut Lake Park also face the problem of being unable to cover their opportunity costs.


Mark Turner, the [Economic Progress Alliance of Crawford County] executive director, did not respond to several requests for comment. He has said park trustees will consider filing for Chapter 11 bankruptcy to stop the sheriff’s sale and freeze the park’s assets, according to The Associated Press. The redevelopment agency could then proceed with plans to renovate the park, transforming it from a summer amusement park and lakeside resort to a cultural destination that can earn revenue year-round.

“We have to convert the park from a 10-week business model to a 12-month business model, or we will not achieve self-sufficiency,” Mr. Turner said in June.

Developers would like to build a new lakeside performing arts center and outdoor amphitheater, and possibly condominiums, and would improve the hotel and amusement park already in place.

Condominiums and roller coasters don't mix ... let us call the roll of Nantasket Beach or Crystal Beach or Muskego Beach.  But the roller coaster at risk is a classic. 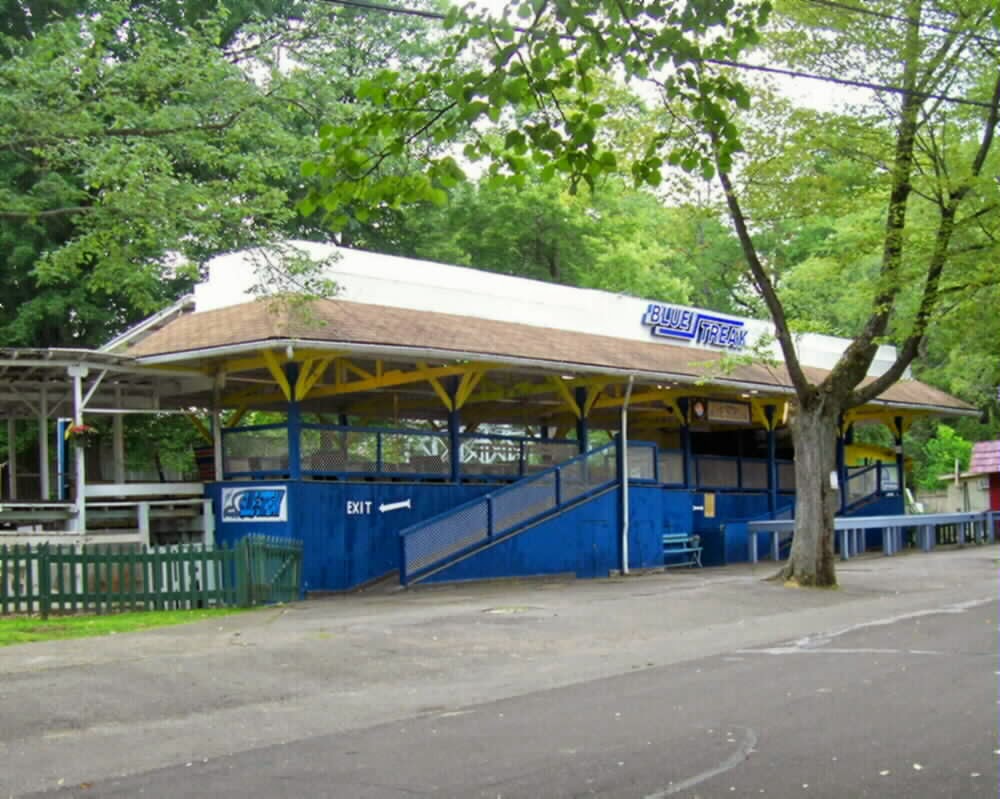 Immediately next to it is an even older, classic, carroussel (I'm using the spelling the park used to use.) 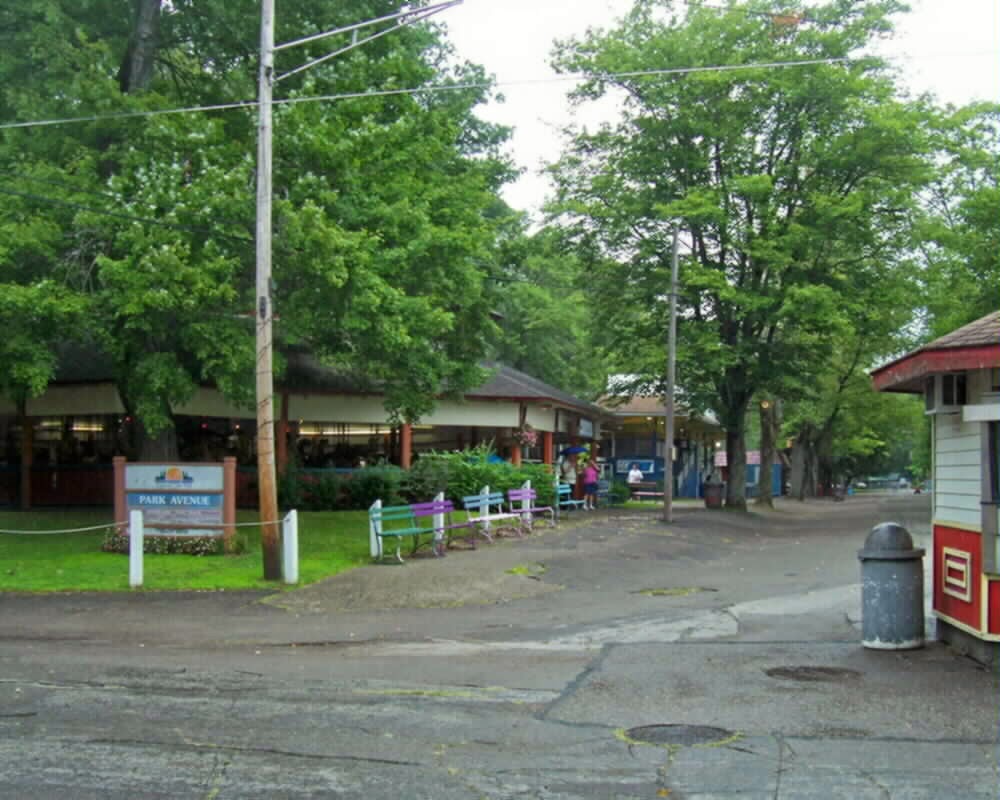 On this rainy Monday, August 11, there are few riders on the grounds.  The kiddieland section is in operation, as much of the crowd is the pre-school set. 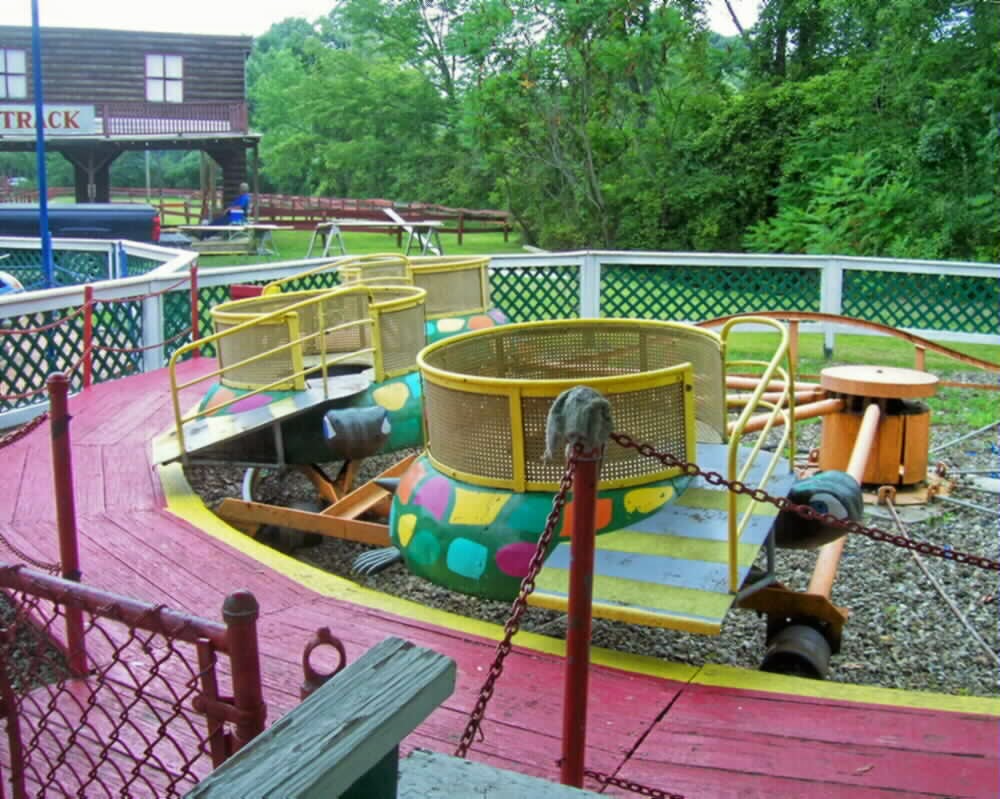 That's a Junior Tumble Bug, and a number of the other junior rides are similarly classic. 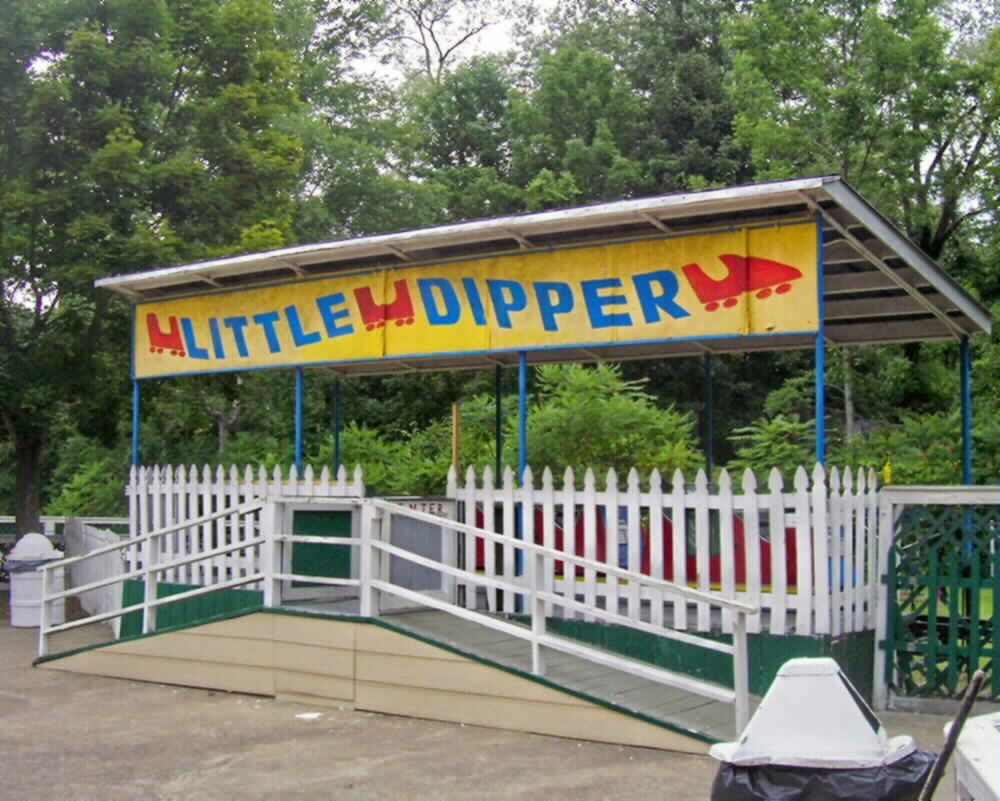 The Little Dipper was available as training, for patrons not yet tall enough to ride the Blue Streak.

But many of the adult rides are property of concessionaires who, concerned about the prospect of a sheriff's sale, have been removing their rides, or stripping them for parts.


The other old rides still operating are the 1925 Tumble Bug, 1937 Blue Streak wooden out-and-back roller coaster and 1949 Tilt-A-Whirl. The coaster was not operating the day I visited, and I learned it often is shut down. There hasn't been a Ferris wheel on the grounds for several years.

The Tumble Bug is one of only two full-sized versions still operating in the U.S.; the other is at Kennywood near Pittsburgh. Chippewa Lake Park also had a Tumble Bug, and in my archives is a photo of Vaca sitting in one of its cars when we explored that park.

The Tumble Bug underwent a test before the park opened. 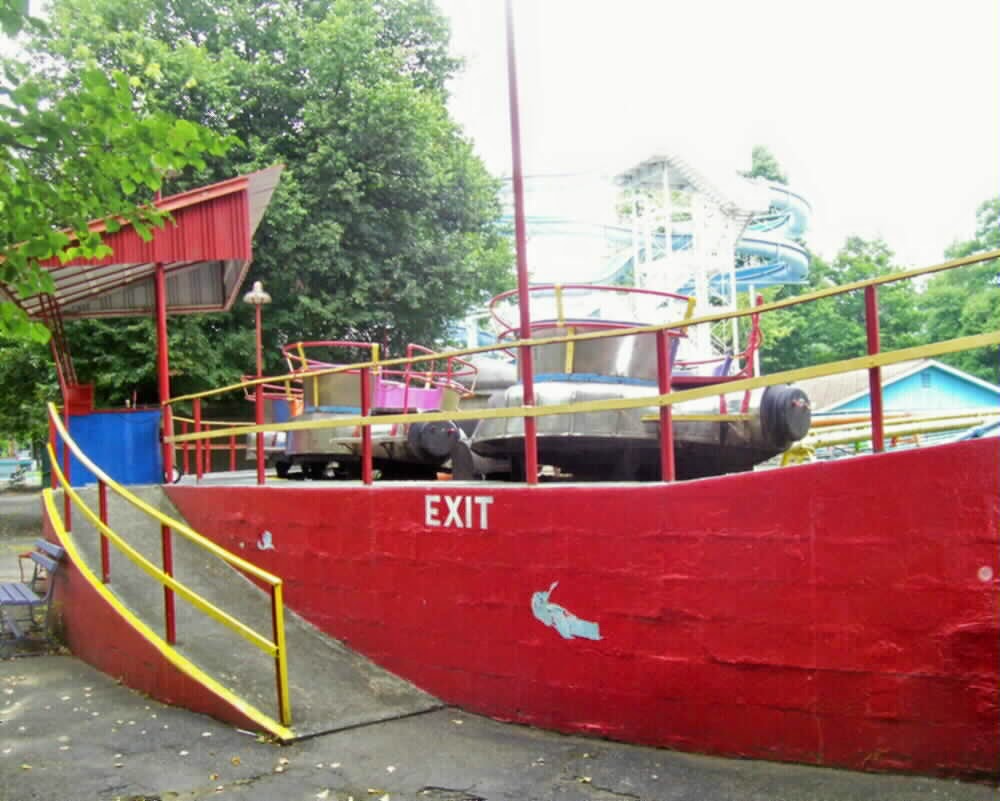 Properly, that's a Traver Tumble Bug as in the Traver Engineering that gave the world the Crystal Beach Cyclone and the Revere Beach Lightning.  But the water-park behind looks derelict.  This article provided the status of several resort attractions beyond the midway. 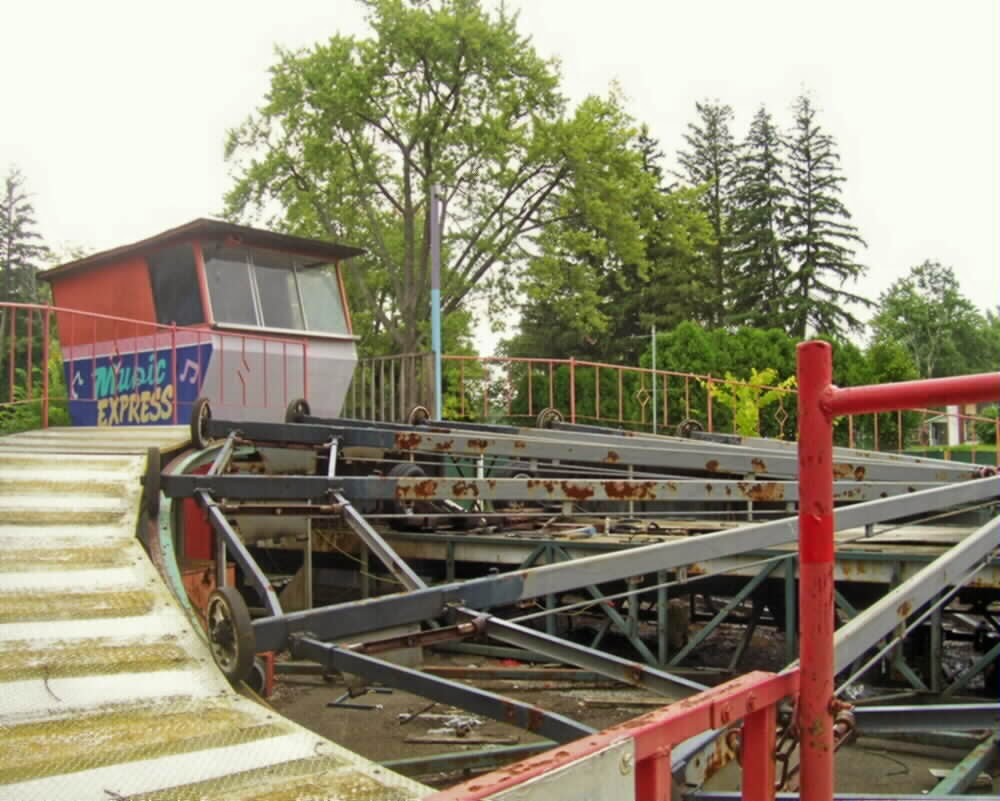 Next to the Tumble Bug, the Musik Express is partially dismantled (or never fully assembled?) 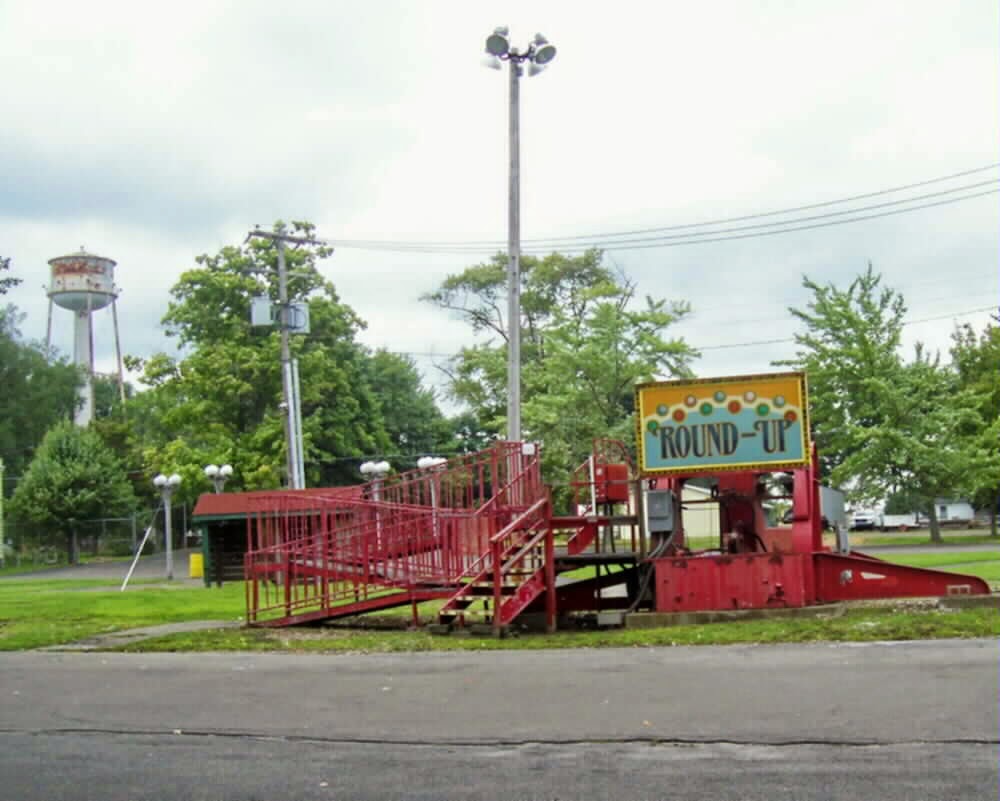 The base of the Round-Up, and the rusty water tower behind, lend a post-apocalyptic air not moderated by the overcast and a threat of rain. 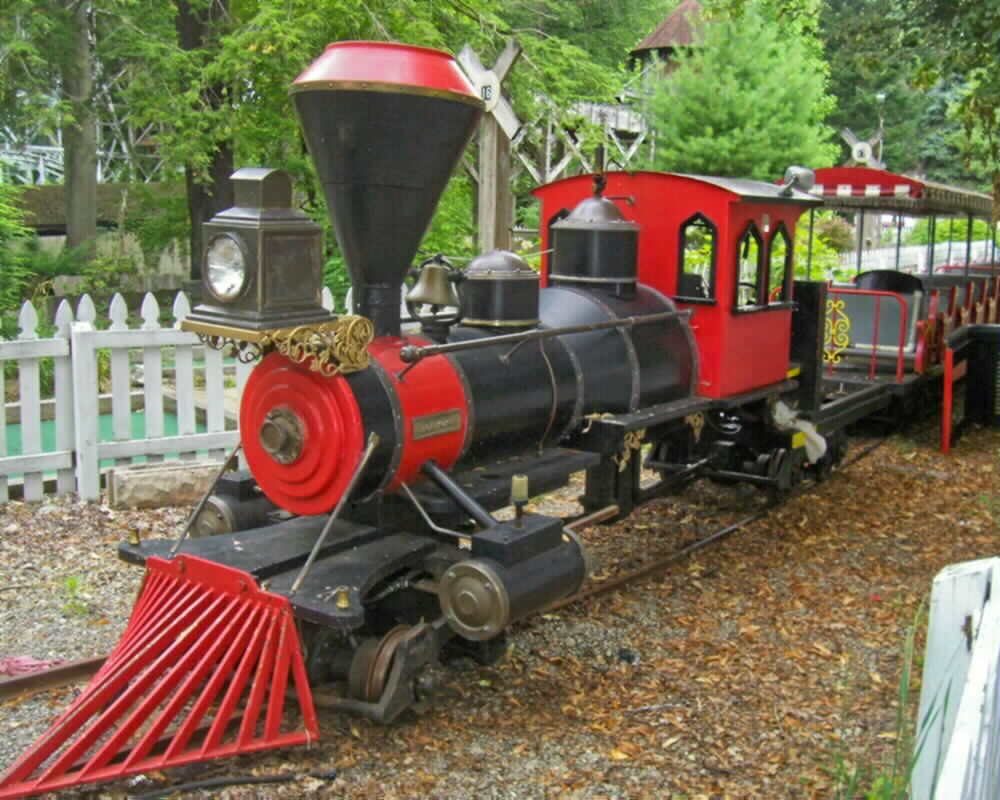 And the train, similar to the one at Hoffman's, hasn't turned a wheel in some time.  The locomotive might have surrendered its driving wheel to keep some other amusement park train running.

Despite local boosters hope for a reprieve, the sheriff's sale is set for November.
Posted by Stephen Karlson at 13:02