Which of the following two choices leads to more fuel savings:

(A) buying a 15 mpg Cadillac Escalade instead of a 12 mpg Chevrolet Suburban, or

Read it carefully: it's decision making at the margin. Ceteris paribus conditions are provided for the readers. "Assume you would drive the same distances and speeds no matter which car you have." Thus the total fuel use will be the least with the Prius and the greatest with the Suburban.  But switching from the Suburban to the Escalade produces more fuel savings.

Relatively small changes in the fuel use of fuel-intensive cars lead to large changes in fuel use.


We suspected that most people would not spontaneously think in terms of this curvilinearity and would, in fact, think that fuel consumption decreases as a linear function of MPG. In our paper, two studies confirmed that people reason in a linear fashion; a third study showed that their misperception could be corrected by using gallons per 100 miles as the measure of fuel efficiency. 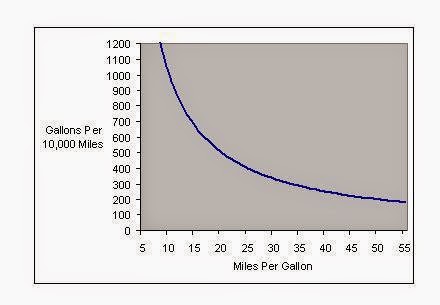 If this argument sounds vaguely familiar, it's because it's the same argument I make in my Free Rein to 110 campaign for passenger trains.  An improvement in running time from averaging 40 mph to averaging 100 mph saves passengers more minutes than an improvement from 100 to averaging 160 mph in the German fashion does.  And the cost of adding those next 60 mph is greater, in much the same way that adding the next 20 miles per gallon to the fuel economy of an automobile.  And improving the fuel efficiency of an automobile generally means sacrificing passenger or cargo space, or, in the case of any hybrid vehicle, being able to tow a trailer.

Posted by Stephen Karlson at 23:57

I'm going to use this in the first week of my advanced macro class in the spring (where we talk about the desirability of logging trending data for better understanding).

Yes, anything involving growth rates is more transparent on a ratio scale. I hope the high schools are still teaching that.

Thanks for the favorable link.