WHY CAN'T WE HAVE INTERURBANS LIKE THEY HAVE IN JAPAN?

The Economist highlights one reason for the commercial success of Japan's investor-owned passenger railroads.


JR East, the largest by passenger numbers, does not require any public subsidy from the Japanese government, unlike the heavily-subsidised French network. One reason for its efficiency is that JR East owns all the infrastructure on the route—the stations, the rolling stock and the tracks—meaning there are fewer management teams duplicating each other's work. (By contrast in Britain, for instance, ownership of the tracks and trains is split up.) But the railway also thrives because of a planning system that encourages the building of commercial developments and housing alongside the railway route. JR East owns the land around the railways and lets it out; nearly a third of its revenue comes from shopping malls, blocks of offices, flats and the like. This money is reinvested in the network. In Britain, where planning and transport are rarely aligned, it is hard to create similarly successful commercial developments. Indeed, most of the plans for the areas around the stations of HS2 are vague, and some of the stops along an earlier line, HS1, are still underdeveloped, years after the line was built.

In the Cold Spring Shops collection of obsolete software is the Amiga A-Train simulator, which one wag characterized as "SimTrump".  The player purchases real estate, right of way, and trains, then provides schedules and builds residences and offices, with the hope of making money.  (Looks like there's a way to download a compatible version for newer computers, as well as something similar coming out for Nintendo, if I have any younger readers, please advise.)  The simulation is loosely based on those Japanese rules that allow railroads to be real estate developers as well.

In the United States, it's all illegal.  There's one vestige of the old days left, the Blue and Green Lines of Cleveland's rapid transit began life as the Shaker Heights Rapid Transit, purpose-built for the residents of the eponymous new suburb.  (I've alluded to this interurban previously; perhaps a focused Throwback Thursday is in order.)  In Cold Spring Shops territory, the purpose of The Milwaukee Electric's Rapid Transit Line was to help the anticipated suburban householders who were going to buy their electricity from The Wisconsin Electric Power Company to get downtown to shop and to work. 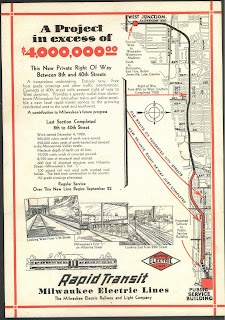 In like manner, Samuel Insull's Chicago-area power, light, and traction enterprise built the Skokie Valley line of the North Shore in hopes of cashing in on suburban development.  These projects came up short account the housing-market crash we now understand as the Great Depression of the 1930s, and the Public Utility Holding Company Act made such energy and transportation conglomerate firms illegal.  But when you're fretting about the costs of infrastructure, or the absence of rapid transit substitutes for the daily traffic jam, remember your history.


Once upon a time, the power companies built railroad tracks and transmission lines in the same corridor. The purpose of building the railroad was in some cases to secure the franchise to deliver the power, some of which was provided via trolley pole to the railroad cars. And to keep those trolleys busy on weekends, sometimes the power company would build an amusement park at lineside. Chicago's Ravinia and Pittsburgh's Kennywood come to mind; the Pewaukee Yacht Club occupies space near another such amusement park.

And that, dear reader, is why we can't have interurbans like they have in Japan.
Posted by Stephen Karlson at 16:27

What if a company were to be in the railroad business *and* the real estate business, but *not* in the electric power business? Would the provisions of the Act still apply, given RR deregulation since the late 1970s?

That appears to be what's going on with Florida East Coast's planned privately operated Miami to Orlando train service. Don't know whether that generalizes. First, FEC operate only in Florida, and their real estate holdings might be subject to different rules. Second, most Commuter Rail and Transit Authorities are government agencies, perhaps they can hope for a piece of the property tax revenues from transit oriented development, but anything more will likely smell of corruption.