It has long been custom in Tsarist Russia, the Soviet Union, and today's Russia, for prisoners to be transported in railway cars.  In order to conceal the volume of prisoners being exiled, the cars would frequently be disguised as baggage or postal cars.  These days, they can pass for ordinary passenger stock. 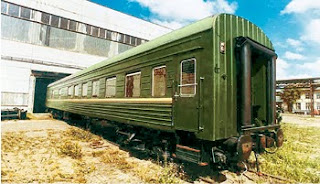 A release tweeted by Railway Gazette notes that the new coach "incorporates feedback from human rights bodies."  That noted, the car offers seating for ten "attendants" and 75 prisoners, with optional refrigerator and microwave oven available, amenities not available to guards in Stalin era.  Presumably that 75 prisoner capacity does not involve thirty zeks to a compartment.
Posted by Stephen Karlson at 15:52