Commuter Rail operators and light-rail rapid transit lines are providing space, sometimes dedicated, sometimes shared with the wheelchair anchoring space, for bicycles.  Thus a passenger -- not necessarily a commuter, as the timetables may forbid bicycle loadings during the rush hours -- isn't limited to park-and-ride, or to where the feeder buses go.

But the Last Interurban does not yet do so.  The timetable clearly notes, Bicycles are Prohibited.  The fine print issues an exception for folding bicycles that can be wrapped in a bag and stowed in the overhead luggage racks.  Those are for foldable strollers and ordinary luggage, of which there is a lot, particularly on the South Bend trains.

The Chicago Sun-Times reports that The Last Interurban is notorious among bicycle riders.


A Chicago bike advocacy group is calling out the railroad company that operates the South Shore Line between South Bend and Chicago because it’s the only commuter line in the nation that doesn’t allow passengers to bring their bicycles aboard.

The Active Transportation Alliance recently announced that it was lobbing the ignominious Broken Spoke Award at the Northern Indiana Commuter Transportation District, which operates the interstate rail line.

Streetsblog reports that the carrier has heard the request, but doesn't know how to honor it.

Last year, bids for a PTC system for the South Shore came in at three times over budget, according to Parsons. NICTD is currently reviewing a second round of bids and determining how much of the capital budget would have to be spent on the system. “In the long term, we certainly want to buy additional [rail cars],” he said. “We need additional capacity. Used equipment may become available.”

At a recent NICTD board meeting, consultants proposed adding a bike-specific train car to only two train runs a day: one per rush hour. However, Parsons said this isn’t the only possible scenario. The number of bike cars per day would depend on how many older cars could have seats removed to make room for bike racks, he said. Another X factor is that not all South Shore trains make the the full run to South Bend. Some are split or combined at Michigan City, Indiana.

Presumably, the used equipment does not include the Samuel Insull era combination cars. 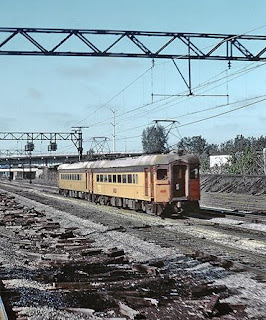 By the late 1970s, the interurban was running whatever cars were serviceable, including two cars with baggage compartments, or none, and the timetable didn't identify baggage-carrying trains.  At one time, that was the discipline, and almost all South Bend trains had one of these cars on the east end, thus you could check your bicycle through to South Bend, or any intermediate station where the baggageman would meet the train.

There is a work-around available, should the transit district consider it.


The Active Transportation Alliance’s south suburban outreach manager Leslie Phemister, who attended the board meeting, told me that the train line could immediately begin accepting bikes if they allowed cyclists to use unoccupied wheelchair spaces on the cars.

Since it’s difficult to carry a bike onto South Shore train cars at stations that don’t have level boarding, Phemister proposes that the ADA-accessible stops should also be designated on the schedule as bike-friendly stations. At these stops, cyclists could simply roll their bikes from the platform into the center door of the car to the wheelchair space.

“We’re not going to pit a bicycle rider against a passenger in a wheelchair, competing for spaces,” Parsons responded. It’s true that, if a wheelchair user needed the space, the bike rider would need to leave the car. However that’s the way things work on Metra, which has successfully accommodated cyclists for a decade.

Parsons added that the South Shore’s ADA spaces aren’t large enough to hold a standard bicycle, although he declined to provide a photo illustrating that point. If that truly is the case, perhaps a seat or two could be removed on some cars, and those cars could be labeled with bike symbols.

Bottom line: If NICTD management really has the will to accommodate cyclists, they’ll find a way. The other roughly two dozen U.S. commuter lines have all come up with solutions. It’s time for the South Shore to stop making excuses, put on their thinking caps, and come up with a short-term plan for accepting bicycles.

It's probably too much to hope for a return of emergency package service and combination cars in the next order of new interurbans.
Posted by Stephen Karlson at 12:13