The Illinois Electric Railway Museum began with a single car, a lightweight interurban originally built for the Indiana Railroad that North Shore Line motorman Howard Odinius purchased when a subsequent owner offered it for scrap. 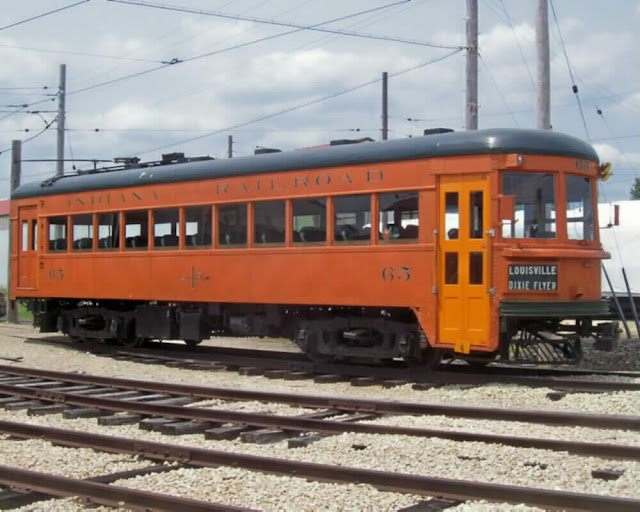 The car, which recently received new upholstery, runs on special occasions at the Illinois Railway Museum.  (The name changed when members began collecting steam locomotives.)  Here, it has been rolled out of its usual home in a car barn in preparation to operate in the trolley pageant.  In the past few years, the museum has changed the pageant from rolling as many operable cars as time and the substation permit in front of spectators to assembling trains of rarely-run cars for visitors to ride.

First thing in the morning of Independence Day, the station area looks like somewhere in Westchester, before suburbanization. 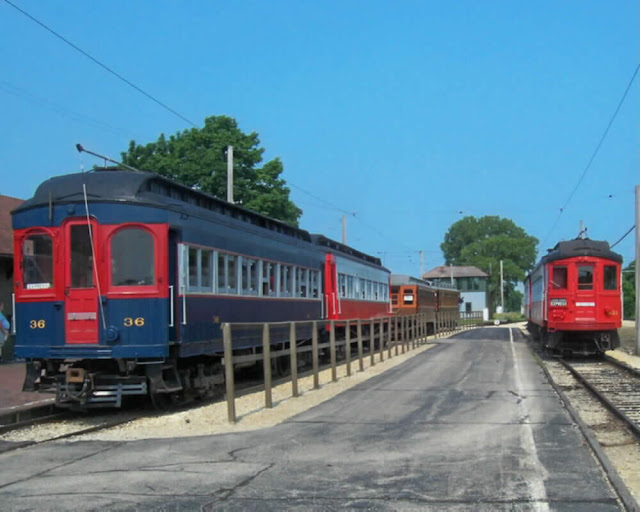 The wood Chicago Aurora and Elgin cars at left recently came over from Cleveland.  The closest car is painted in what some ferroequinologists call the "Continental" or "Early American" colors of red, blue, and grey.  The steel cars and the trailing wood car are in the end-of-operation red and light blue colors.  All very patriotic for Independence Day.

Behind, a pair of wood rapid transit cars purchased for the Northwestern Elevated (the Howard and Ravenswood service today.)  They rarely operate in museum service, although the interiors are now properly restored.  As part of the interpretive explanation, crew members quipped that these cars were new when the Chicago Cubs last won a World Series. 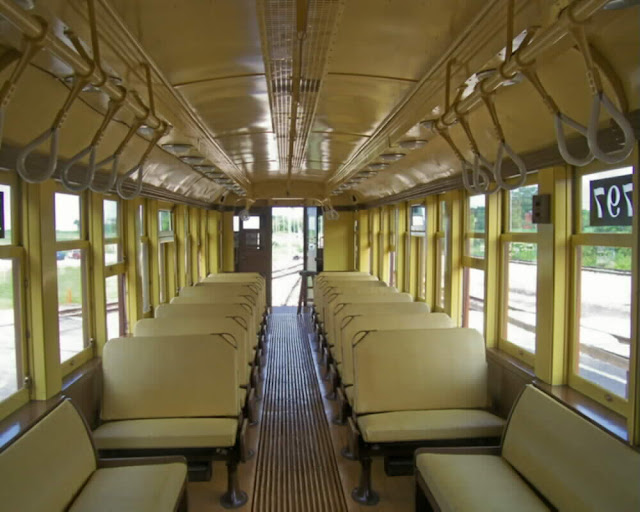 I made a point of getting to the pageant early enough to be able to ride these cars.  There were a few other special cars running.  A visitor has to plan carefully as choosing to ride one rare piece precludes riding others.  (See other years.)  Some years, the museum re-enacts the noontime abandonment of the Chicago Aurora and Elgin that occurred on 3 July 1957.  Commuters rode to work on the interurban, then had to scramble to get home when the company reacted to a judge lifting the stay of an abandonment order by shutting down before opponents of abandonment obtained another stay.  Between some mechanical problems and large crowds, no such reenactment took place either Friday or Saturday. 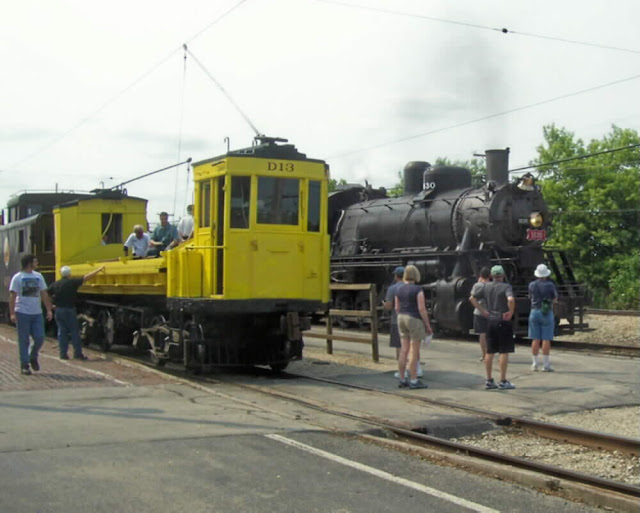 That's the steam train, pulled by Frisco 1630, nosing into the picture.  Museum crews are finishing the rebuild of a Shay steam locomotive that used to pull the caboose train, and there are more serviceable cabooses to run on that train. 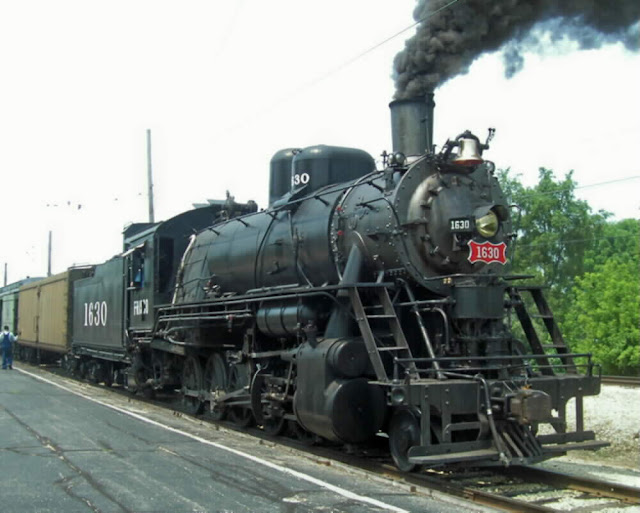 The steam train is a draw all by itself, and three coaches, plus some hand-holds in the postal car, offer lots of capacity for visitors. 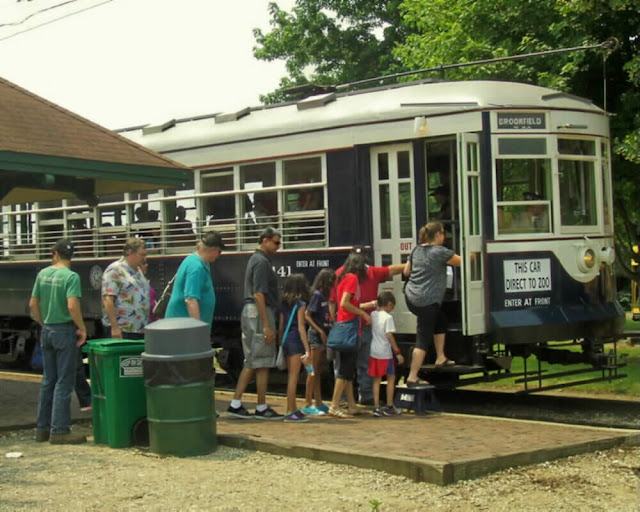 In addition to the five-mile demonstration railway for interurbans and steam trains, there is a streetcar loop making stops at several points of interest around the museum grounds.  It is the Illinois Railway Museum, and there are enough Chicago streetcars of several vintages to provide base service on that loop.  The Chicago and West Towns 141 is a recently-restored car.  It's unusual on the inside, car heating is by a coal stove rather than resistance grids.  Not that we needed heat on Independence Day.

Milwaukee Electric locomotive L3, which used to shuffle coal cars at Port Washington power plant, could do with some tender loving care at the Cold Spring Shops. 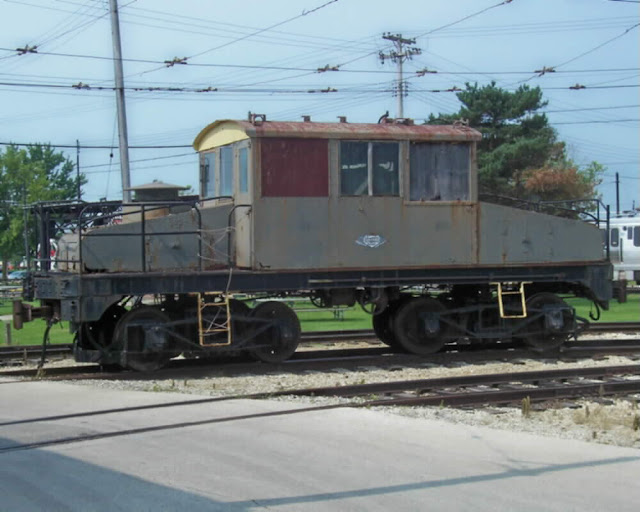 Sister locomotive L4, which shuffled coal cars at Lakeside power plant, is in good enough shape to have pulled the demonstration freight train, one of the few moves that does not handle passengers. 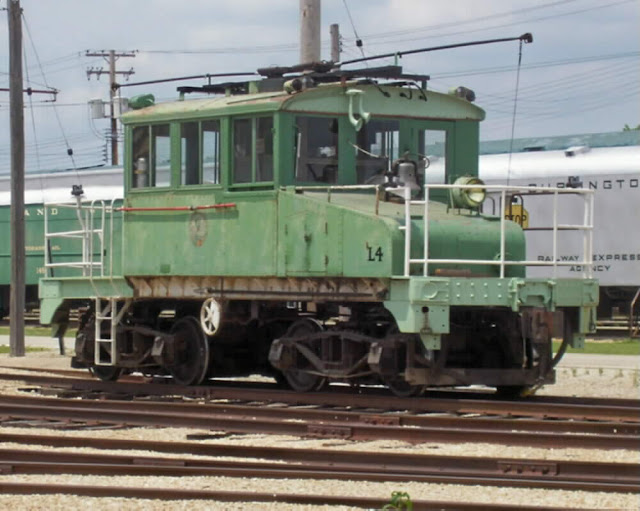 Railroad preservation has gone on long enough now that some types of diesel-electric locomotives are only in museum service. 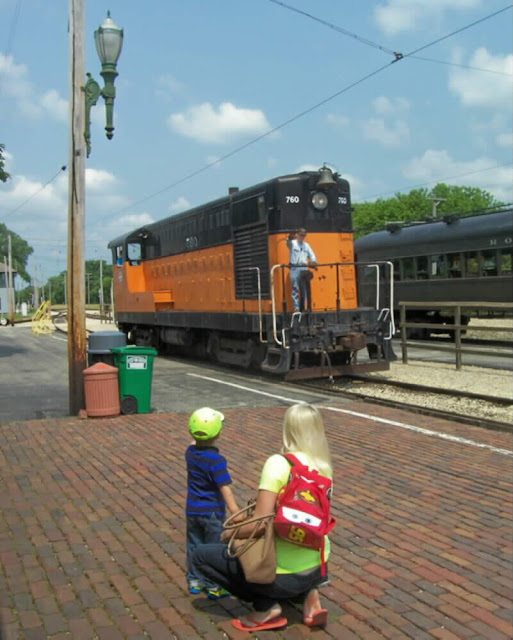 Milwaukee Road 760 is the first production switcher built by Fairbanks-Morse in Beloit.  The tall hood contains an inline opposed-piston diesel.  As long as there are trains, there will be kids waving to train crews.  Perhaps a few of the kids who turn out for open days and for T-H-O-M-A-S (the train crews have learned the hard way not to set the preschoolers off) will go on to build model railroads. 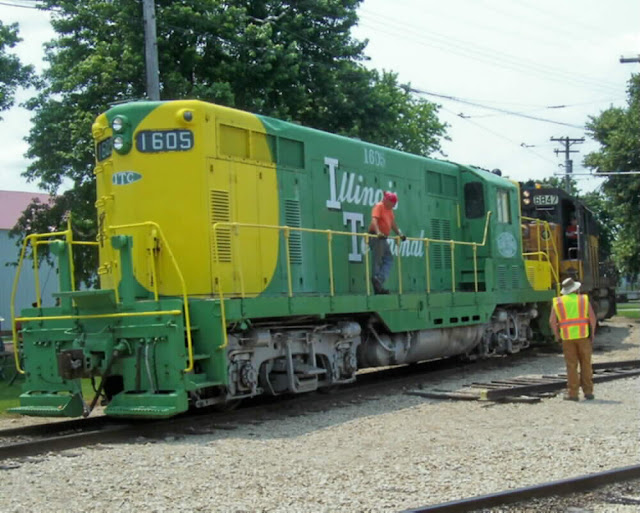 The Illinois Terminal GP-7 is also historic in some way.  Moving it, a Chicago and North Western SD40-2 that I used to think of as the essence of North Western freight power.  How things change. 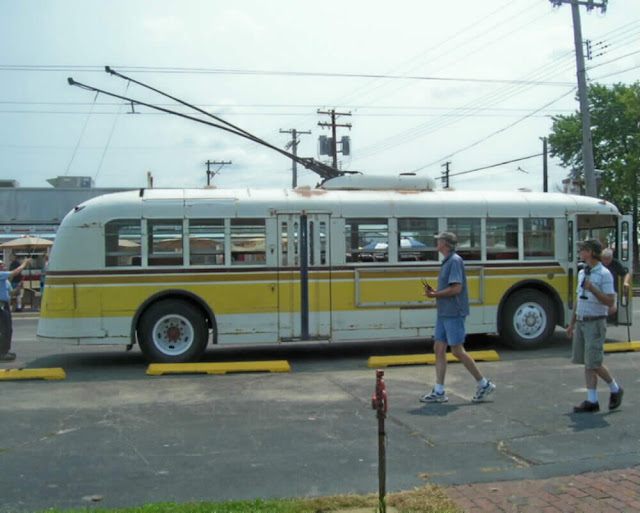 This is a Twin Coach trackless trolley car ... in Milwaukee and possibly other cities, policemen learned the hard way that issuing a speeding ticket to a trolley "bus" was going to mean a trip to court where the judge would throw the ticket out!  The car served Seattle (with all that hydroelectric power, why not run trolley cars and trolley coaches).  The operator is changing the collector shoes on the trolley poles. 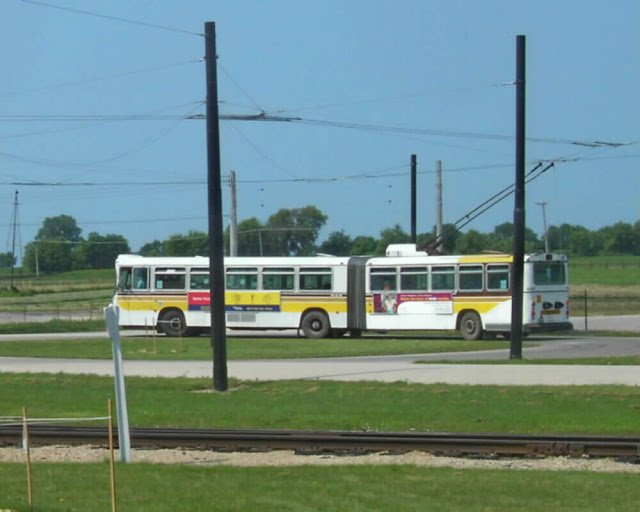 There's no Schuster's department store or Allen-Bradley factory on the grounds, and yet we can observe a latter-day Seattle trolley coach bending the corner around. 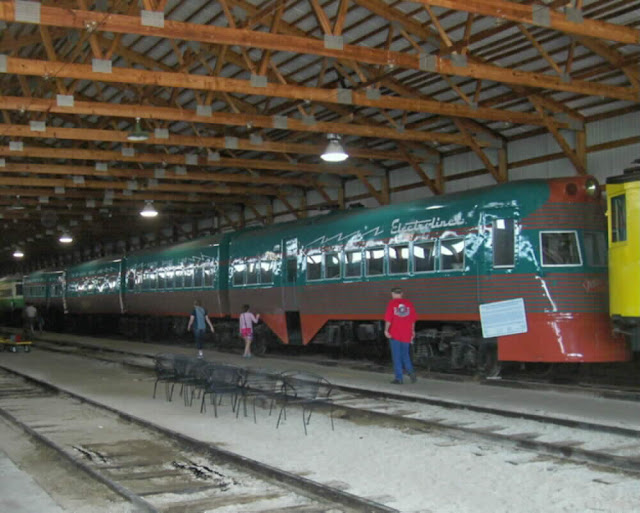 With much of the collection being rolled out of the barns for the pageant, there's an unobstructed view of the Electroliner.  Outside, the paint and bodywork are in good shape.  There are funds for working on the motors and brakes. There's a fair amount of interior work yet to do.

For additional coverage of the trolley pageant, visit Hicks Car Works (parts I and II) and The Trolley Dodger.
Posted by Stephen Karlson at 14:49