ILLINOIS IS A GOOD PLACE TO BE FROM.

The Center for Governmental Studies at Northern Illinois University reports that Illinois leads the way in outmigration during 2013 - 2014.  Illinois may be the most populous of the six states (Illinois, West Virginia, Connecticut, New Mexico, Alaska and Vermont) that had out-migrations, but their net out-migration of 9,972 people might be the largest as a share of state population.

Here's where they went. 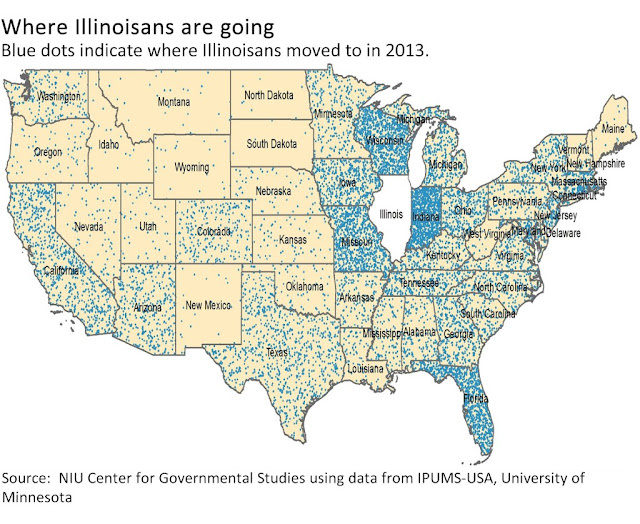 With ten thousand cases and fifty destinations (including the District of Columbia) it's difficult to generalize about why people leave.


“There are many factors at work here, and census information only tells us so much,” [Center researcher Sherrie] Taylor said. “But we do know that most of those who left in recent years took jobs in those other states, so that suggests economic factors – either better opportunities or perhaps concerns about Illinois’ delicate financial health.”

It's likely that Republican spinmeisters in Indiana, Michigan, and Wisconsin are going to engage in compare-and-contrast here, although if the dots in those states are being placed in approximately the right geographic destination, it gets more complicated (Indiana filling in roughly evenly?)

California and Florida may remain popular as retirement destinations.

And the Illinois Policy Institute, no fans of the blue social model, are unsparing in their assessment of Illinois outmigration.


Illinois has a domestic migration problem that is verging on a crisis. Illinoisans are increasingly voting with their feet against the state’s status quo by moving to other states, and taking their jobs and tax dollars with them. In 2014, 95,000 more people left Illinois for other states than moved to Illinois from other states – an all-time record high. This was a massive no-confidence vote in the state, capping off a net loss of 675,000 people in the last decade and 1.36 million people in the last two decades.

That "massive out-migration" story is incomplete.  Apparently the reconciliation of 95,000 with 10,000 involves some 85,000 births in Illinois.  And people are moving into the Chicago area, the Combination's failures notwithstanding.  But it's still cheaper to rent a trailer to move to Chicago than to rent one to move out.


There was far more demand to leave Chicago than to enter Chicago in 2014, as reflected in rental prices for moves between the cities.

Rental rates are equal at Chicago for or from Los Angeles, two cities that used to be popular destinations but both rendered less habitable by Democrats.
Posted by Stephen Karlson at 12:36