THE SILENT POWER OF BOOKS.

Having information at hand is a productive part of a child's intellectual development.


Owning books in the home is one of the best things you can do for your children academically. It helps, of course, if parents are reading to their children and reading themselves, not simply buying books by the yard as décor.

“It is a big question of whether it’s the books themselves or the parental scholarly culture that matters — we’re guessing it’s somewhere in between,” said Mariah Evans, one of the study’s authors and an associate professor of sociology at the University of Nevada, Reno. “The books partly reflect intelligence.”

Reinforcing the habits of the mind, something I've been pushing for years.

The article notes it doesn't take a massive library, there are increasing marginal returns for home libraries of up to a hundred books.  Thus it doesn't take the Cold Spring Shops library to develop intellectually stronger kids. 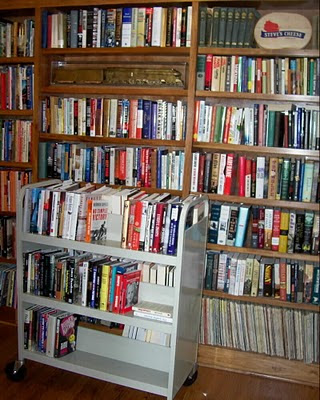 But the electronic media still don't work well with random access.  To use a popular example, if you open a Bible halfway, you land on Psalms.  Regular readers might have a few books for which they know exactly what page to open to retrieve a favorite passage, and that's a recall technique of the so-called photographic memory.


Although the study did not account for e-books, as they’re not yet available in enough countries, Dr. Evans said in theory they could be just as effective as print books in encouraging literacy.

“But what about the casual atmosphere of living in a bookish world, and being intrigued to pull something off the shelf to see what it’s like?” she asked. “I think that will depend partly on the seamless integration of our electronic devices in the future.”

That sort of integration appears to be emerging with music, where there's a virtual version of "drop-the-needle."


Consider the difference between listening to music digitally versus on a record player or CD. On the former, you’re more likely to download or stream only the singles you want to hear from an album. The latter requires enough of an investment — of acquiring it, but also of energy in playing it — that you stand a better chance of committing and listening to the entire album.

Recall, dear reader, that the cuing lever exists to permit more precise placement of the needle on the record without scratching it. With digital cuts, and with properly divided compact discs, a listener gets to pick his favorites without those scratches.

Electronic books, on the other hand, are still at the tape recorder level of sequential access, although if you remember a passage, there are ways to retrieve it.
Posted by Stephen Karlson at 19:46