THE THRILL OF VICTORY, THE AGONY OF DEFEAT.

Two years ago December, here's reality sinking in for the Dallas Cowboy cheerleaders. Here, from Detroit, we see one Packer fan and numerous Detroit fans, at the moment what is about to happen dawns on them.  James Jones gets into both touchdowns. 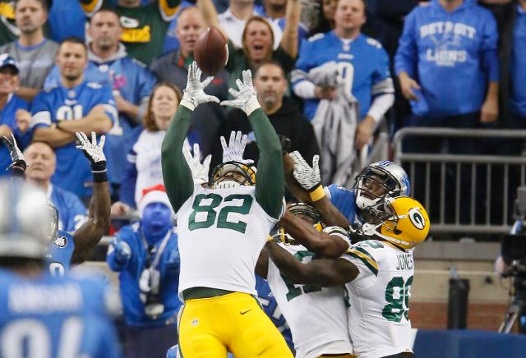 Here's how you improvise on the field.


"They went with a three-man rush, so the ability to extend the play and for Aaron to buy time and really to get the momentum into throw, that's probably the best throw I've seen in my time in this game," McCarthy said. "Just the arc that you want to put on the ball and obviously the distance, so (it was a) great throw."

The playbook for the Packers contains a Hail Mary selection known as "Two Jet Rebound Pass," according to McCarthy. The name is derived from the belief that, when called, a receiver will catch the ball off a deflection — like a missed shot bouncing off the rim in basketball — rather than plucking it out of the air as [tight end Richard] Rodgers did.

But the Packers were not in the right personnel grouping to run "Two Jet Rebound Pass," so they improvised a bit. Five offensive linemen stayed in to protect and then five receivers "scatted" down the field.

In this situation, McCarthy said, the play would have been called "Scat Two Rebound Pass."

"It's more about — obviously the play — but the reaction on the sideline," McCarthy said. "That's the stuff you remember. I get the biggest kick just seeing our guys, the joy that they had and the excitement and the locker room. It was phenomenal."

Sometimes, the ball bounces the other fellow's way. That's been the case with several of the losses.

But by rule, a touchdown in regulation requires a conversion attempt.


"You're running down to the end zone and (referee) Carl Cheffers is running over to me telling me we need to kick the extra point," McCarthy said. "I kind of laughed and said, 'It's going to be a couple minutes. I'm not stopping this. You have to be kidding me.' We laughed about it.

"He said, 'You're really going to kick it?' I said, 'I've never really been in this spot before, Carl.' Then, I said, 'Well, I should just kneel on it.' He says, oh yeah, that's what he would do. I said, 'OK, let's kneel on it.' It was good to have great help from the officiating."

I wonder if Mr Cheffers will get a nasty-gram from the league office for not expediting play.

Enough with football on a school night.  The good news is the Packers (and the Lions) have a few extra days to regroup, rest, and refit.

Go You Packers Go.
Posted by Stephen Karlson at 19:59