HOW THE MIGHTY HAVE FALLEN.

Once upon a time, before cable sports money and power conference spending and Geno Auriemma, Louisiana Tech regularly put a strong women's basketball team on the court.  Sometimes, their front office wasn't as strong as the team, which meant they once played an away game as the higher seed, because Northern Illinois had a front office that recognized an opportunity to sell seats.  Northern Illinois won that game.

More recently, Tech hired Tyler Summitt (yes, of that basketball family) away from Marquette with the hopes of returning to glory.  And Mr Summitt -- I can hear Coach Mom griping, all the way from Titletown, about the atrocity of men coaching women -- brought some players from Marquette with him.

But there might have been somebody fishing off the company pier.  "Sad," notes ESPN's Mechelle Voepel. 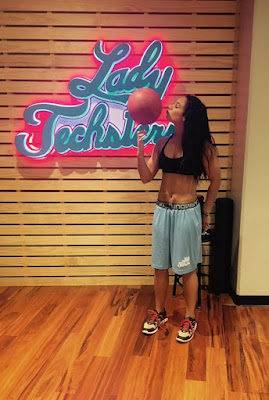 No, my coach didn't knock me up.
Retrieved from Ashley Santos's Twitter feed.

Mr Summitt recently left the team.  And I learned that #notprego isn't a negative reference from a spaghetti sauce manufacturer.

And Louisiana Tech's front office is undoubtedly working on a new non-fraternization policy.
Posted by Stephen Karlson at 10:21