Here are the America's Cup practice boats (AC45 catamarans) waiting for the wind to build on Saturday.  For the first time ever, an America's Cup qualifying regatta took place on fresh water.  There's a State Line connection to the Heart of America challenge with Twelve Meters in 1986-1987,  and the AMERICA3 defenses in 1992 and 1995. 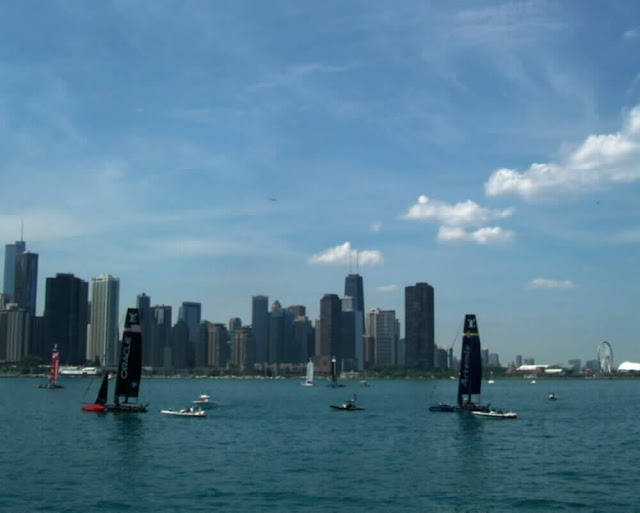 Keep this image in mind while you watch the Olympians sailing in the poop off Rio later this summer.  Story via Betsy Newmark, who notes,


The Olympic Committee put a lot of faith in Brazil's promises to clean up its polluted waterways. They regularly allow the waste from hospitals and households to flow into storm drains and rivers which have then spread the super bacteria throughout the beaches in the city. Sadly, the situation has just gotten worse since Brazil won the bid.

Chicago got the poop out of Lake Michigan (well, unless there are really heavy rains) over a century ago. Yes, the Sanitary and Ship Canal brings other problems. But Chicago's Democrat politicians are less incompetent than Rio's equivalents.

And the wind did come in, and there was spectacular sailing, particularly for the people who attended the Friday practice races, or the Sunday races.  The race committee did get one race in on the Saturday.
Posted by Stephen Karlson at 15:52