A REPUBLIC, IF YOU CAN KEEP IT.

The Milwaukee area Oktoberfest takes place at the Bavarian Inn, which used to be called Old Heidelberg Park, and it has long had a soccer field.  (The field might also have been a drill field for the German-American Bund, but that was a long time ago.)  And during the day of Oktoberfest, there was a game going on. 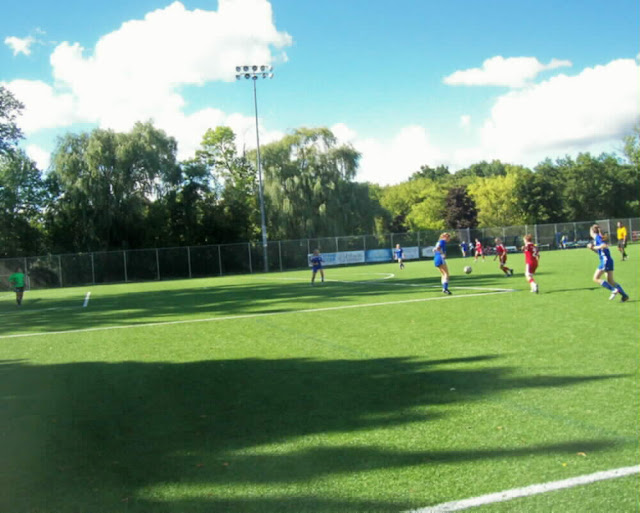 There's that deep bench in U. S. women's soccer developing (as well as what appears to be a properly organized goal rush.  But as is often the case when you ruin a good run in the grass with the necessity of kicking the ball at the net, no score.)

In the Milwaukee area, the soccer collectives tended to have ethnic names, such as Bavaria using the Old Heidelberg Park field.  Here are three young ladies wearing the Bavaria colours conducting a 50-50 raffle.  (Not bad prizes if you win.) 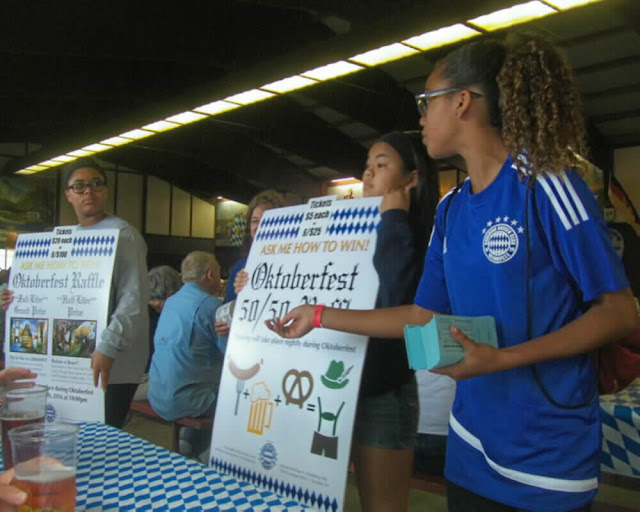 No longer are the soccer collectives made up of their European tribes.  There were also several young ladies in the red and white colours of Polonia getting in on the Gemütlichkeit.  The soccer moms were quaffing beer, the kids not so much.  Let's be grateful that the Serbia collective and the Croatia collective no longer re-litigate Tito's insurrection.

The raffle didn't sit too well with some of the people attending the festival.  (At weekends, wedding parties visit German outdoor cafes selling small bottles of schnapps for good luck, the raffle might be a Midwestern version of the same thing.  On the other hand, roast potatoes rather than potato salad, and cole slaw along with sauerkraut??)

But give these kids an America to buy into, and an America that buys into these kids, and we'll be OK.
Posted by Stephen Karlson at 09:34