BY MR FEINGOLD'S STANDARDS, NAPERVILLE IS NOT A COMMUNITY.

The former senator from Wisconsin, now working to get his job back, takes a dig at the Joseph Project, a faith-based initiative providing van transportation for Milwaukee residents to factory jobs in Sheboygan.  "It’s not enough to pick people up in a van and send them away a couple hours and have them come back exhausted at the end of the day. That doesn’t make a community."  Perhaps not.  It's called the work-a-day routine.  There's even a song about it.  And, unlike rush hour passengers on Metra, the Joseph Project commuters are assured of a seat on their conveyance. 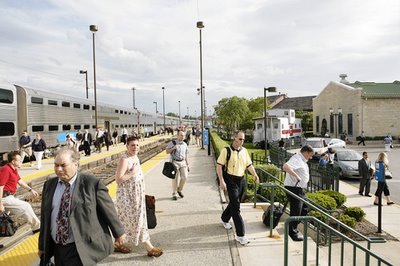 At National Review, Alexandra DeSanctis notes that (unlike the Patient Protection and Affordable Care Act -- ed.) the Joseph Product is working, and it's well-received by participants.

Mr Feingold might gripe that his critics are selectively quoting him.  His continuation is instructive, perhaps, though, not in a way he'd like.  "There needs to be more investment in minority-owned businesses, community policing and in public schools, Feingold said."

How shall I start?

In the John Galt fashion:  Invested by whom?  Blank-out.

In the Great Society fashion:  More urban renewal?  Enough of your good intentions, already?  Ditto for your malicious intentions.

He's right, though: entrepreneurship and good schools are present in Naperville.  Are the politicians in the Milwaukees of the country providing the environment in which those phenomena can flourish?
Posted by Stephen Karlson at 15:41