A City Lab post is, shall we say, skeptical about streetcars.


It’s hard not to succumb to the charms of the streetcar, the frisky chocolate lab of urban transit. Urbanists delight in their walkability-promoting scale and commitment to permanency—those rails stuck in the street seem to embody the faded promise of public transportation itself. Environmentalists dig their cleaner emissions (assuming your local grid isn’t coal-fired) and greater passenger capacity, compared to diesel-spewing buses. Older folks appreciate their nostalgia factor and low-floor boarding, which makes them easier on wheelchair users and aging knees. The business community enjoys the developer-friendly subsidies and other sundry tax breaks that that often accompany their construction. And just about everyone likes the whole Euro-classy vibe they evoke.

Put another way, the rent-seekers and the aesthetes go for the streetcars. But a proper streetcar service is a network.  Most of the cities have installed short lines in shopping districts, which bus riders can still reach on the city bus.


The fact that both Cincinnati and KC’s systems are more popular on weekends seems to support one of the fundamental arguments against them: They’re more tourist toys than transportation systems used by residents and commuters. Too slow and short to function as bona fide people-movers, they’re just expensive downtown amenities for out-of-towners, opponents say, gobbling public dollars that should be devoted to more useful forms of public transit.

Read on and you see that streetcars are part of the same infrastructure medicine as sports stadiums and concert halls.  Oops.

I understand the Milwaukee streetcar project is going forward.  Let me refresh your memory.  Here's how you do streetcars to the Plankinton Arcade (a precursor of the Grand Avenue Mall.) 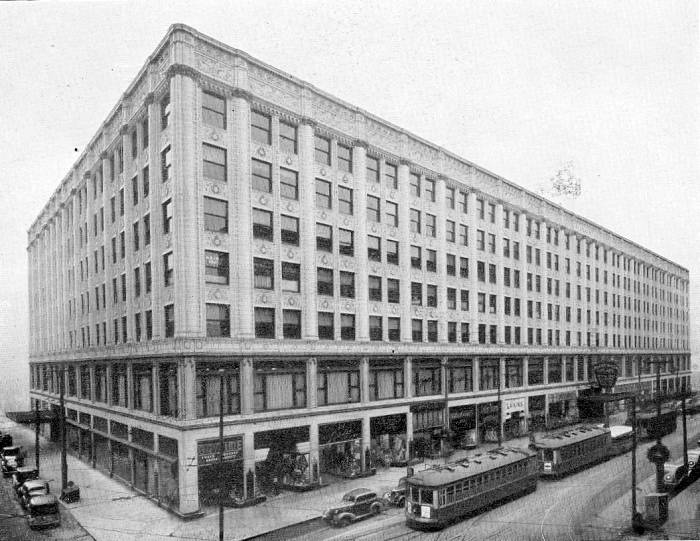 Image from The Transport Company Web Station
(properly subtitled "Where the Streetcar Bends the Corner Around".)
Posted by Stephen Karlson at 23:40