BETTER TO RULE IN HELL THAN SERVE IN HEAVEN.

We'll conclude the quest for fifty book reports in 2016 at Book Review No. 34, which is Michael Walsh's The Devil's Pleasure Palace: The Cult of Critical Theory and the Subversion of the West.  Yes, it's another in the theme of Higher Education Has Gone Nuts, but there's some provocative stuff dealing with Original Sin and Faustian Bargains and other religious themes.

Let's start by contemplating the circus.  Do you see the religious symbolism on this wagon? 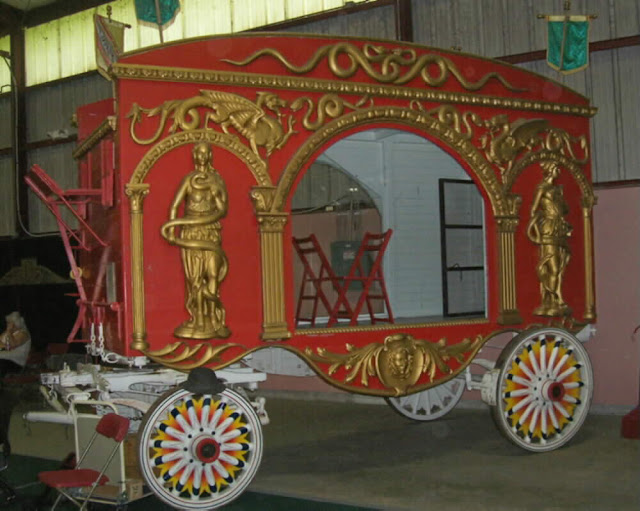 That's something I twigged to from reading the book: the popular culture used to have all sorts of reminders of Sin and Mortality, although when the circus came to town, that exotically costumed lady holding a napping constrictor was all part of the Entertainment Event of the Summer.

Here, though, is the challenge of higher education.  Mr Walsh, at page 19.  "[It is Eve's] transgression -- her Original Sin in reaching for the Godhead -- that makes her, and us, fully human.  Would we want it any other way?"  (That's as pithy a rejoinder to John Galt's "The name of this monstrous lie is Original Sin," although the Speech, and Mr Walsh's perspective on education, and on human aspiration, are otherwise in accord.)

John Milton himself put that sentiment in Satan's mouth.

The mind in its own place, and in itself,
Can make a Heav'n of Hell, a Hell of Heav'n.

The devil is in the details.  So mote it be in higher education.

And thus does the academy become the Devil's Pleasure Palace.  The dynamic Mr Walsh conjectures appears after the American Victory (perhaps more of the Victory Dividend Resource Curse?)  From page 90:


Prior to the American victory in the Second World War, men like Adorno, Horkheimer, Gramsci, Lukacs, Reich, and Marcuse would probably have been shunned, their philosophy rightly considered the ravings of bitter, dangerous malcontents.  But the very fact that America emerged with a high moral standing after its defeat of Nazi Germany and Imperial Japan, whose crimes were inarguable, left the homeland open to the serpents who slithered in while nobody was looking and hissed, "Why Not?"

The Pleasure Palace itself?  That's a reference to an obscure early opera of Franz Schubert, written in a time when the ancient verities still had some purchase, and people knew how to resist the blandishments of the snake.  Today, though, page 15, "What the West has experienced since the end of the Second World War has been the erection of a modern Devil's Pleasure Palace, a Potemkin village built on promises of 'social justice' and equality for all, on visions of a world at last divorced from toil and sweat, where every man and woman is guaranteed a living, a world without hunger or want or cold or fear or racism or sexism.  ... A world, in other words, that sounds much like Heaven."  (There are some commonalities with Galt's Gulch as well, but I digress.)

Perhaps I found the book congenial because I've long had reservations about what I call tenure music, which assaults the ears in the guise of avant-gardisme or something.  Case in point, at page 121:


The irony was, as many of us noted at the time, that there was little difference aurally between rigorously serialized music (in which no note could be repeated before the other eleven in the "tone row" had been heard) and what was called aleatoric, or "chance" music (in which many of the musical lines were simply improvised in an often random or haphazard fashion).  That is to say, complete control of the material and near-complete lack of control curiously produced more of the same aural results.  Audiences couldn't really tell the difference, so why bother?

Because epistemic closure.  Or intelligent design (ah, the irony!)


The answer from the serialists was: because.  Because a great deal of intellectual work had gone into the structure of the dodecaphonic piece, worked out on paper; it could not be compared with chance music, even if there was a resemblance in performance.  One was "deep," the other was not.  And both were superior to the tonal idiom of the past 350 years because ... they were new.

This circular reasoning is, I believe, one of the attractions of Critical Theory and progressivism in general.  It appears to require thought, but in fact, all it requires is faith  -- faith in the ritual and the dogma and in the trappings of thought, but always in the service of novelty for its own sake, masquerading as "dissent" or "revolution."  As Orwell predicted in 1984, sloganeering must ultimately replace free inquiry if the System is to survive and prosper; there cannot be even a single ray of light in the darkness, lest the people glimpse the truth.

Pace Stanley Fish, and post-modernism being liberalism taken seriously, when the deconstruction proceeds for its own sake and in spite of possible consequence, much can go wrong.

And I've long been skeptical of the so-called sexual revolution and the rabbit culture on campus.  Thus does Mr Walsh's version of Paradise Lost resonate, page 88.


And so Eve was offered the apple: In exchange for rejecting a "traditional" sex role of supposed subservience and dependency (slavery, really), she would become more like a man in her sexual appetites and practices (this would be called "freedom"), and she would be liberated from the burdens of motherhood via widespread contraception, abortion on demand, and the erasure of the "stigma" of single motherhood (should it come to that) or spinsterhood.  ... The only thing she had to do was help destroy the old order.

The result has been predictable: masculinized women, feminized men [with some push-back by pickup artists], falling rates of childbirth in the Western world, and the creation of a technocratic political class that can type but do little real work in the traditional sense.  Co-educational college campuses have quickly mutated from sexually segregated living quarters to co-ed dorms to the "hookup culture" depicted by novelist Tom Wolfe in I Am Charlotte Simmons to a newly puritanical and explicitly anti-male "rape culture" hysteria ...

Crucially, at every step of the way, "change" from the old norms was being offered as "improvement" or "liberation" -- more fulfillment, more pleasure, more experience.  And yet, with each step, things got worse -- for women.  Eve's bite of the apple sent humanity forth from the Garden, sadder but wiser.  [But as John Galt put it, Man became moral.  The dependent creatures of the Garden were more like well-fed dogs.]  Today's transgressive Western woman is merely sadder and often ends her life alone, a truly satanic outcome.

Go against thousands of years of emergence in a short time, a lot can go wrong.  Mr Walsh summarizes, page 131.  "The Left's pleasure palaces are all around us, in their promised utopias of social justice, egalitarianism, sexual liberation, reflexive distrust of authority [implicitly, other than that of Student Affairs or Stephen Colbert], and general nihilism.  What they've brought about instead -- as all pleasure palaces must  -- is death, destruction, and despair.

Let's get beyond the high-concept stuff and close these observations with the more practical ways in which losing the good of the intellect has consequences.  Here, for instance, is a Heterodox Academy post, "How Marcuse made today’s students less tolerant than their parents: "When colleges fail to represent the full measure of political ideas, students are less likely to learn to tolerate those unlike themselves. This, combined with the New Left’s legacy of “liberating tolerance,” creates an environment that values anger and orthodoxy over inquiry and debate." That is, if the students are learning anything at all. Perhaps, though, Slacker Nation is taking the identity politics lesson to heart.  And perhaps, as The Federalist's Brian Hawkins suggests, "Original Sin Implies Limited Government," John Galt shall lie down with John Milton.

For my part, I repeat, "Put another way, there's enough evidence that adoption of bourgeois conventions and listening to Beethoven confers evolutionary advantages that people raised in the streets or the rain forests might gain by adopting."

I shall attempt to remain cheerful, despite 2016 being the year Ringling Barnum pensioned off their elephants.

(Cross-posted to 50 Book Challenge.)
Posted by Stephen Karlson at 12:54