MAKE A CASE FOR FREQUENCY AND CONNECTIVITY.

Our President's budget proposal, which includes zero funding for Amtrak's long distance trains, is likely to be postponed because even with Republican majorities in the House and Senate and a president purporting to be a Republican, it's likely to be another continuing resolution at the end of the week to avoid a government shutdown.  (And yes, all the roles are reversed, the Democrats who the last time around viewed any budget ceiling brinksmanship as approximating treason, and flirting with welshing on existing bills, are now willing to engage in brinksmanship so as to keep some items in, and spending on the border wall out.)


Going by rail is a more leisurely form of travel. It allows passengers to relax and enjoy the scenery as the train moves along. Traveling by train used to be a common form of transportation, but it has become a dinosaur of sorts. Most people don’t think of trains when making travel plans, which is too bad because train travel can be more relaxing.

The National Association of Railroad Passengers argues that given time, long-distance train travel will show a profit and offer economic development opportunities. That’s open to debate since Amtrak has been struggling for years to show a profit. The chances that Congress will follow Trump’s recommendations aren’t too bright.

North Dakota’s congressional delegation opposes cutting funds for the long-distance service. Rep. Kevin Cramer, R-N.D., who has been a strong supporter and defender of Trump, has come out against the cuts. He noted the Empire Builder served 454,625 passengers in 2016, which would be a lot of people forced to find alternative travel.

While it doesn’t look likely Congress will approve cutting the long-distance service, some changes are needed. Train travel can’t just be a luxury dependent on federal funding. Amtrak needs to find ways to wean itself off federal funds.

The nation shouldn’t give up on train travel because it still offers opportunities. We just need to do it right.

Yes, let's start doing it right by considering whether or not paved roads are a luxury dependent on federal funding.  The public roads are not self-supporting, and building everywhere to accommodate 53 foot trailers is a far greater misappropriation of public property.

Then let's think about the role of the train.  The Empire Builder across North Dakota goes places where there are few intercity buses and fewer scheduled airlines (even with the industrial reserve army of Tri-Motor pilots that United relies upon to keep its code-sharing United Express services running on the cheap.)  When it's running to time, it serves as a kind of a throwback to the Olympian Hiawatha combined with the Morning Hiawatha eastbound and Afternoon Hiawatha westbound east of the Cities, and it's scheduled for convenient times at Glacier National Park and as a kind of a transcontinental train for Portland or Seattle.  That means it's crossing North Dakota in the hours when nothing good happens in bars.

In place of one, overpurposed cruise train, mightn't it make sense to run several shorter-distance trains timed, for instance to get students to Grand Forks or Fargo or Morris, and to offer multiple frequencies between the Cities and Chicago?  That second train between Chicago and the Cities doesn't go away on the Minnesota and Wisconsin wish lists, and it would be easy enough to fit it into the existing nomenclature, with the Milwaukee services simply Hiawatha Service, the Cities train becoming the Twin Cities Hiawatha (yeah, it's a convex combination of Chicago and North Western and Milwaukee Road nomenclature) and there's a host of promising Great Northern names for the additional service further west.

The Great Northern lore is present all over the Fargo station. 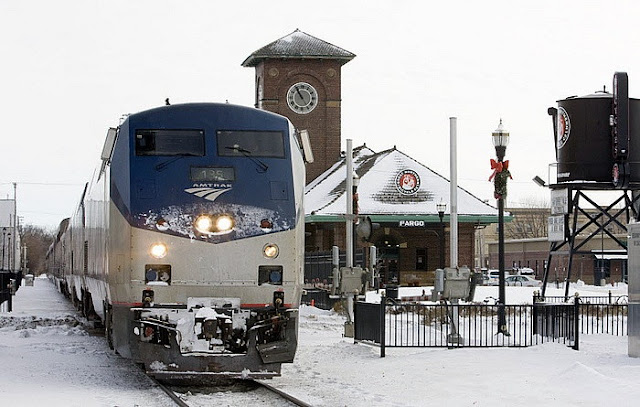 What was I saying about timekeeping?  The Builders are scheduled through Fargo around 2 am westbound and 3 am eastbound.  Those local passengers aren't well served by this timetabling, and when the service is hours late, as this must be, there's no Red River or Dakotan or Western Star as a fallback.
Posted by Stephen Karlson at 23:28