Charles "Strong Towns" Marohn asks, "How is the thinking of a cargo cult any different than the thinking that brought us this?" 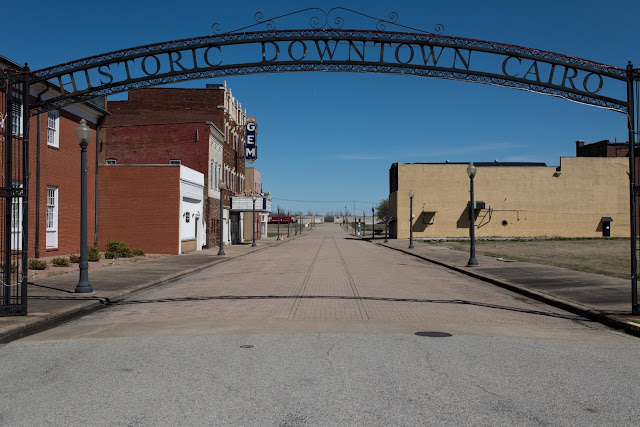 You have to imagine the streetcar, and the well-turned out men in their straw skimmers and women in their feather hats queuing for the latest Edison marvel playing at the Gem.  The reality: "The 'Historic Downtown' is entirely given over to decline. Empty except for the past attempts to revive and market it — the faux traditional lamposts, the brick streets."  The rest of Cairo?  There are still people attempting to hold something together.  Even the suspicion of outsiders Mr Arnade encounters has an optimistic cast to it.

Memo to the Creative Class types: unlike Pacific Islanders who might have been able to reassure themselves that the planes full of cargo might still be calling at other islands, and perhaps the bounty will return, the inhabitants of the towns that have been bypassed are able to observe and understand the ways in which the symbolic rejuvenation model isn't working.
Posted by Stephen Karlson at 14:42