A FASTER TRACK FOR THE ALTON ROUTE.

It seems like it's taken forever to rebuild the Alton Route, but the new tracks and the new diesels are on the way. "Faaster and more reliable locomotives combined with improved signals and tracks will cut the time it takes an Amtrak passenger train to run from Chicago to St. Louis by one hour by next year, state officials said Monday."

The locomotives are good for 125, thus maintaining 110 on the additional segments of upgraded track should not be a problem.  But getting the trains between Alton and Saint Louis, or Chicago and Joliet, will still be the problem.


[Illinois secretary of transportation Randy] Blankenhorn told the Tribune he did not expect major time reductions on routes other than the Lincoln service, but he believes the locomotives will create greater reliability "across the board."

"Our focus on the other routes is how do we make them more reliable, how do we work with the freight railroads to make that happen," he said.

For the record, the new service will be more frequent, but not much faster than it was fifty years ago.

Lady Baltimore, and the various Hiawathas and Zephyrs, could not be reached for comment. 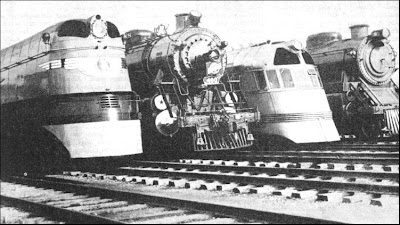 And I see from that post that there's still opportunity to contemplate new coaches for the Chicago regional corridors.
Posted by Stephen Karlson at 17:00