DOWNSIZING IS A FALSE ECONOMY.

Earlier this summer, we picked up a Fred Frailey column suggesting railroad operations guru Hunter Harrison was liquidating CSX Transportation.  How serious was he?

Enough so, apparently, that the efforts of Alfred Perlman and Robert Young to reduce the New York Central from four tracks to two wasn't enough of an economy.  (Yes, there are still traces of The Water Level Route in place across New York, if you know where to look.) 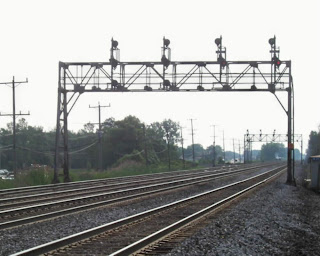 So now Mr Harrison wants to reduce two main tracks to one in places.  Mr Frailey has some fun with that idea.


A couple of years ago I built a simulation model for CXS [c.q.] between Buffalo and Selkirk using interactive Train Dispatcher 3 software. I’ve just employed this platform to run the trains actually operated over the territory on a recent midweek day. Then I went into the software, removed 100 miles of double track over the 295-mile stretch—and reran those same trains.

I cut young people who play a lot of games on their 'phones some slack as I too am a Train Dispatcher 3 junkie, although my efforts are more in the "what if" category, such as adding train frequencies between Chicago and the Twin Cities and allowing 125 mph running in places.  But there's enough about railway operations in 12" = 1' for enthusiasts to simulate the real thing.


CSX currently operates 38 regularly scheduled trains a day between Buffalo and Syracuse (DeWitt Yard), and 40 between Syracuse and Selkirk/Albany. Of these, eight are Amtrak trains, six handle automobiles, 10 are manifest freights and 14 to 16 are intermodal trains. Plus there are locals, unit ethanol trains, maintenance of way trains, industrial jobs around the big cities and occasional extras.

Given the complexity of operations across Upstate New York—intermodal hotshots overtaking manifest and auto trains and Amtrak schedules overtaking everything—I didn’t try to redesign the network into a conventional single-track road. Instead, I took out pieces of double track between some existing control points until I had eliminated 100 track miles that can be redeployed to lengthen sidings on the Chicago-Waycross, Ga., artery. I left double track on the approaches to Selkirk and Buffalo and through both Syracuse and Rochester. I also left in place the West Shore bypass line around Rochester.

Looks like he also left the short stretch of four tracks, only one alongside a passenger platform, at Buffalo. 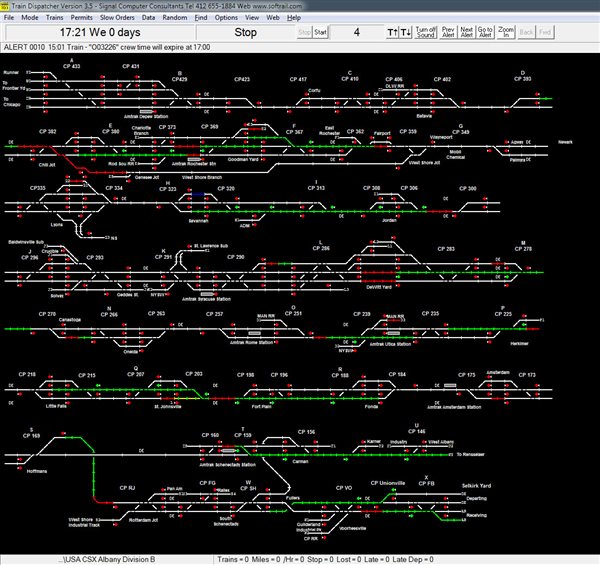 That single-tracking emulated what Messrs. Young and Perlman did a half century ago, when the outside sidings between the towers in place at the time became the third or fourth track for recessing trains.  Note here that some of those sidings have been retained as places to put slower trains out of the way of faster trains.  And put them out of the way they must be.


Surprisingly, the original railroad with its double track intact is almost as hard to dispatch as the one minus those 100 miles of second main. Because of frequent overtakes, you cannot just fleet trains. Instead, you are constantly getting slower trains out of the way of faster trains running up behind them.

The price of removing those 100 miles is a 28 percent increase in delays, caused either by waiting at red signals or being unable to make track speed. That extra lost time adds up to 23 hours. Because I tried to observe train priories—Amtrak, intermodal, auto, manifest, local, industrial, in that order—those trains at the low end suffered most, and the Amtrak and intermodal trains least.

I concluded that losing those 100 miles of double track wouldn’t cripple CSX across New York. All things considered, 23 hours of added delay may be a price worth paying.

Wait, you say! Won’t this stunt future traffic growth? Yes indeed, but who says there’s going to be an increase in traffic? CSX has slowly been going out of business all during the 21st Century, its manifest business down 20 percent since 2000, its coal franchise a shadow of its former self and its intermodal growth at least temporarily halted. Former management under Michael Ward may have talked the growth talk, but didn’t walk it. I have no reason to think Ward’s successor, Hunter Harrison, will act differently.

That's been my experience. When I'm riding the Lake Shore (on rails, not on the replacement bus that I've been presented with too often) the train frequently crosses from one main to the other, and those crossovers must get so much use that the rough running is on the straight side ...

For years, though, the Wizards of Wall Street have been seeking control of CSX in order to make management spend less money on track.  To my naive view, that looks like slowly liquidating the company, but perhaps that is the intention.
Posted by Stephen Karlson at 18:09

I am not at a point in my life where I have time to play many games/simulations.

A shame the developer no longer supports the product as Train Dispatcher 3 allows for up to thirty passenger stations, plus it provides for trains reversing direction and changing their identities. No more little sneak-out tracks for way freights, they can do their local work on a more prototypic siding or spur, or for short-turning passenger trains, they just assume their new identity and reverse direction without going off and then coming back on. You'll see one such screenshot here, under the earlier versions there had to be little sneak-off tracks at Fairview Avenue and Downers Grove for the flip-back trains, which would leave, then when they reappeared, they'd be doing track speed and then have to screech to a stop ...