Will the proposed double-tracking of the South Shore Line lead to neighborhoods going upscale on the east side of Gary?  "As area residents on Wednesday passed through the Marshall Gardner Center for the Arts in the Miller neighborhood, they expressed generally positive views of the South Shore Line's plans to double-track its railroad between Gary and Michigan City, and to improve stations along the route."  There's a little bit of transit-oriented gentrification near the current Miller station, as well as a plan to turn the flip-back trains at a new coach yard, rather than on the center siding at Gary.


The rail infrastructure would include two realigned South Shore tracks, gauntlet tracks for passing freight trains, two storage tracks and two new bridges east of the station. The storage tracks would be used for trains that will start the morning commute at Miller. Currently those trains begin service at Metro Center, where they're stored between rush hours.

Unfortunately, current Federal Railroad Administration regulations obviate cuts and adds.  The protocols are only slightly less complicated than those governing rendezvous and docking of Project Apollo command and lunar modules, and defeat the purpose of electric multiple unit cars (refresher rant here, if you wish).  Thus we're not likely to see a Sunset Express dropping cars at Miller to cover the Duneland stations, and cutting unnecessary cars at Shops, the way things worked in the era of the orange arks.

But one holdover from the era of orange arks remains.  I had hoped to catch a presentation of the Rail Rangers interpreting the social history of the South Shore on Saturday.  But their show might have been preempted by football specials. 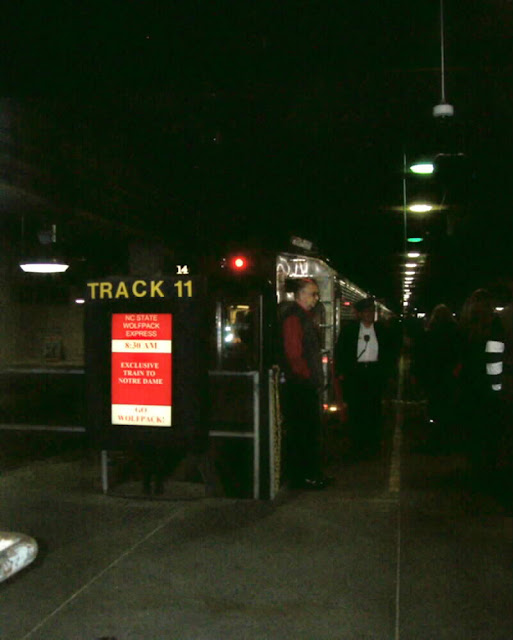 I was aware that University of Southern California fans chartered special trains for their clashes at Notre Dame.  Former Northern Illinois University coach Dave Doeren made it through a rough patch at North Carolina State and brought a ranked team into South Bend, with enough followers to charter a Passenger Extra departing ten minutes ahead of the scheduled train, and there were plenty of fans aboard the scheduled train as well. 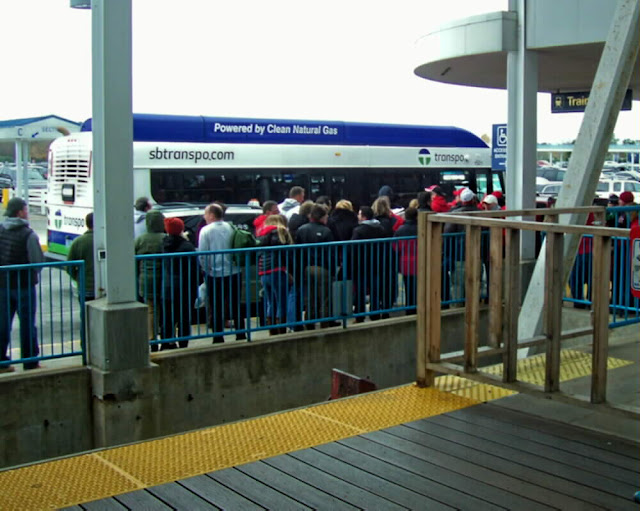 I hope there were enough of these virtue-signalling busses to get all the fans to the shadow of Touchdown Jesus in the two hours between arrival and kickoff.  The regular train ran a few minutes late account passenger loadings and adjustments to track use with scheduled maintenance and preparation for the double tracking under way.

The Rail Rangers hope to be offering programming most Saturdays through the end of this year and into January.  But be guided by this advice.  "Please check this page on the morning of your planned departure if you are riding just to experience our onboard program."
Posted by Stephen Karlson at 16:26