NO QUIT IN THIS TEAM.

Yesterday's team reunion and banner reveal didn't get off to a good start for Northern Illinois.  The opponent was Western Illinois, now campaigning under the same "Leathernecks" moniker as the guys, rather than the previous Westerwinds.  Swirling winds, Marines storming beaches, what have you: they got off to a good start, hitting three-point baskets or recognizing driving opportunities, then being disruptive on defense.  It got so bad that the Northern Illinois coach had to call a time out just before the end of the first quarter to recombobulate.  And after the intermission, the visitors built as much as a fourteen point lead. 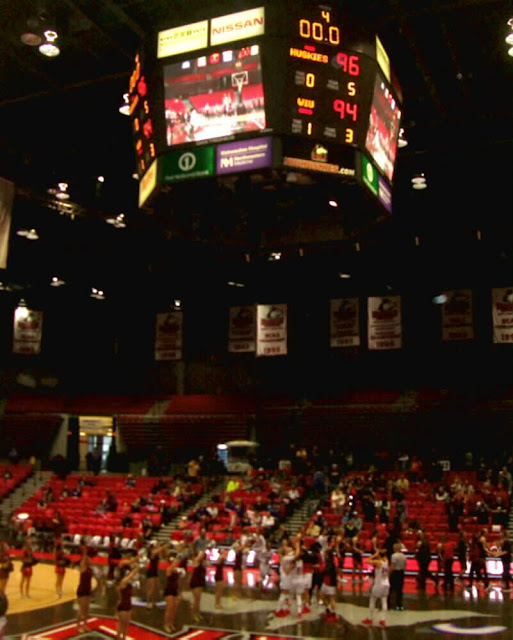 That's not edited in the camera.  Northern's kids took a 92-91 lead with under two minutes to play.  Score is tied at 94 with under two seconds to play.  Three times-out used in those final two minutes: under the new rules, the team runs its out-of-bounds play in the forecourt.  "The play was exactly what was drawn up and these players have run that a million times," said NIU Head Coach Lisa Carlsen. "From a coaching standpoint Coach [John] McGinty did a great job of drawing up the play, these players did a great job of executing and Kelly [Smith] did a great job of sticking it in the basket."

Note, at upper left, a gap between displayed banners.  The unveiling, a half hour after game's end, proved to be more festive that it appeared much of the game. 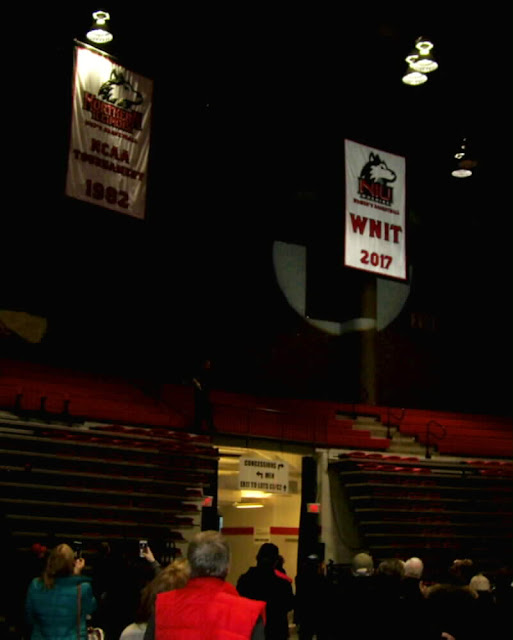 That's not a bad way to get down to serious basketball, and start thinking about March.
Posted by Stephen Karlson at 11:30