TO REALLY FOUL THINGS UP REQUIRES A COMPUTER.

Cold Spring Shops have been on holiday, checking out real trains that run on rails, for much of the past week.

The occasion was a trip to Boston to gather information relevant to the model railroad, and to ride the Boston and Maine to Glosta for chowda and a lobsta.  Missions all accomplished.

They are decking the Great Hall in Chicago Union Station for the season, and the Polar Express excursions that will run (using gallery cars and diesels, sorry, no steam) between Thanksgiving and Christmas. 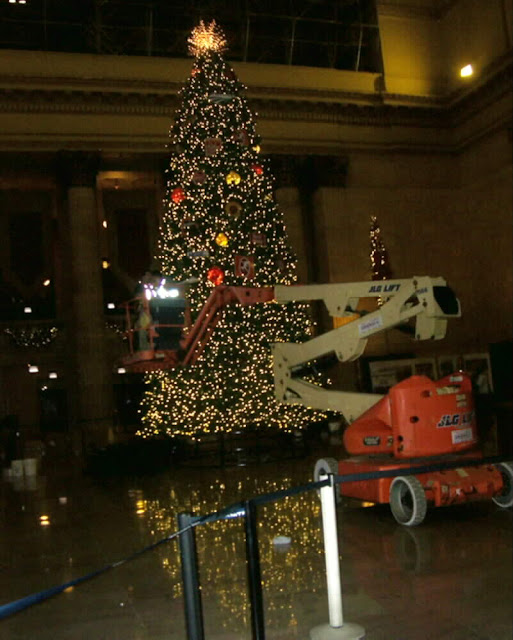 At the food court, I chatted briefly with the engineer of the Lake Shore as far as Toledo, who mentioned that Norfolk Southern are now implementing some sort of artificial-intelligence dispatching algorithm.  It reduces the train dispatcher to an appendage of a machine; his responsibility apparently being to put in the estimated starting time of the train, its destination, power and tonnage, and the algorithms work out an optimal path for the train given the power, conflicting trains, the ability of the receiving yard to receive the train, the probability of a penny on the rails, and unusual occurrences not otherwise indexed by number.  The algorithms are also supposed to be adaptive, although he quipped something to the effect that they haven't seen much learning yet.  On the other hand, he noted, it was Sunday.

But it is Norfolk Southern and you know what is going to happen.

First, though, let's chill in the new Metropolitan Lounge until train-time.

It's on two levels now, with an upstairs entrance, if Amtrak are able to spend the money on staffing it.  And that upstairs room, also decked for the season, is called The Pennsylvania Room, honoring one of the three original railroads that owned Union Station. 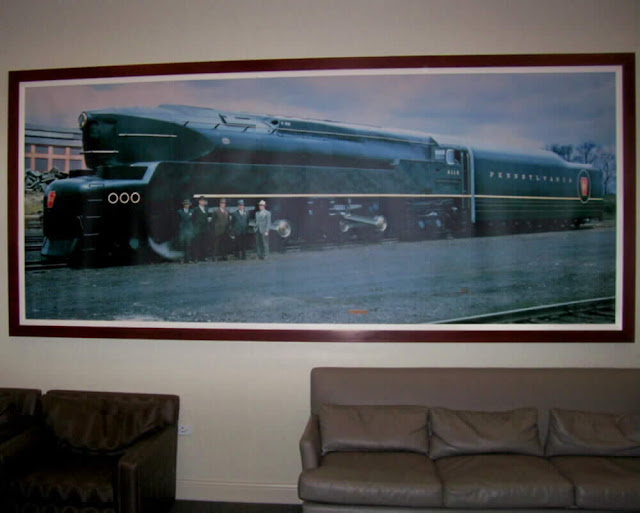 So what will we see first, restoration of a through Chicago - Pittsburgh - Philadelphia train, or the construction of a from-scratch new T1, or should I just stick to improvising in my basement.

First, though, let's go for a train ride.

Away OK at 9.30.  It's Sunday, thus there's no adult beverage sale once the lounge car opens, as that opening is close to the Indiana state line.  Car attendant has made down my upper.  That's a recommended option on Viewliners as the uppers have windows.  Rolling well until just past Gary, then it's time for the algorithm to learn a lot.  Watch a South Shore train pass eastbound.  Still waiting.  Watch a South Shore train pass westbound.  Want to doze off, but dozing off while aggravated over delays isn't easy.

My best guess:  Elkhart wants to send the per diem trains west, but the algorithm incorrectly hopes that a per diem train off one of the western carriers can get into Elkhart without laying out the Lake Shore too badly.  No such luck: we spent more time stopped than rolling between Chicago and Elkhart, and you know you're in trouble when the first call for breakfast comes just east of Sandusky, Ohio (due out at 4.12.)  Worse, that late running puts the train into a signal maintenance window on CSX between Ashtabula and west of Buffalo, meaning we're doing the stop-and-proceed, or, at interlocking signals, the "after stopping authorized to proceed at restricted speed ..." and all the passengers intending to connect with regional trains or buses at Boston are screwed as those have all been long gone by 1.13 Tuesday morning, when we reach South Station.

I also have to wonder if Amtrak's use of the business class and lounge car as the food service on the Boston and Albany isn't engendering some ill will.  The attendant announces a closure, eastbound out of Albany, westbound out of Framingham, of the cafe section in order to serve the sleeper passengers supper or lunch.  It's a train, and people mostly don't get too worked up about stuff ... the over-wrought sorts are up in the air, or perhaps they're on the Acelas.

Missions accomplished, time to head home on Thursday.  Rainy day, thus no car details, plus the dining car crew offered to seat the Boston sleeper passengers during the Albany stop, where that was an across the platform walk. 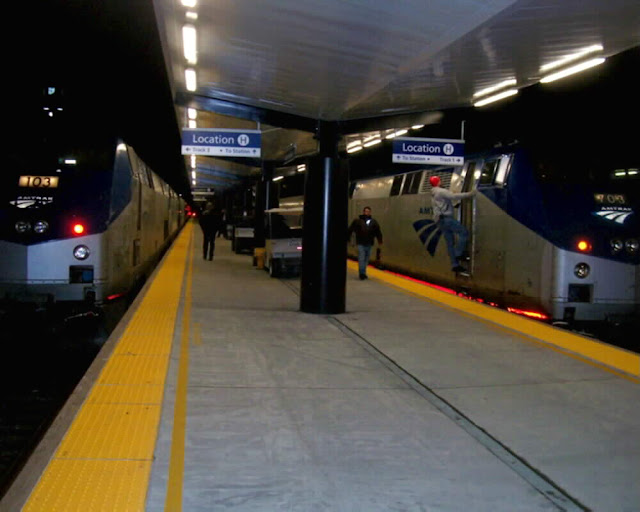 Even so, why does it take the better part of an hour to combine the two parts of the train at Albany?  The Boston cars are at left, and motors 103 and its follower will run through to Chicago, whilst the dual-mode 709 will come off.  The odd layout of the train, with sleepers at both ends, means there's only one cut (the New York motor) and one shove (the Boston cars onto the front of the New York cars) and off we ought to be able to go.  It would take three cuts and four shoves to assemble a train in the proper order (baggage, coaches, lounge, diner, sleepers) and current regulations on the inspection of passenger cars after coupling and uncoupling make for a more complicated evolution than docking the Command and Lunar Modules.

That operational convenience, though, means that the Boston sleeper passengers have a lengthy walk from the diner back to their accommodation, and we had some older and infirm passengers along.  They managed, but there has to be a better way.

Overnight, my impression is that the train was waiting for time at Rochester, at Erie, and possibly at Toledo.  Elkhart coming up, and yes, the fun begins.  An hour late into Chicago, but the passengers intending to go further west today did make their connections.

And Amtrak sent me a link to a survey, my impressions of the eastbound trip.  I hope there's a section to comment on those delays west of Elkhart.

We hope to resume regular commentary over the weekend.
Posted by Stephen Karlson at 17:31