The Orange Bowl is still not The Orange Bowl, and yet using it as a consolation prize for teams that didn't survive the algorithm that replays the Southeastern Conference title game establishes the national tournament field makes a nod to tradition.  Even when that nod gives the Miami Hurricanes effectively a home bowl game, hosting Wisconsin.

The Miami fans have adopted what appears to be a defensive coordinator's incentive called a "turnover chain." 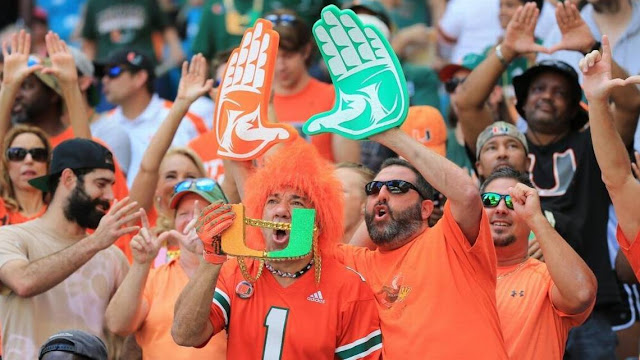 I'll let people with more refined sensibilities than mine deconstruct the cultural appropriation of a bit of gangsta bling by Miami's upscale fans.  I think the lady to the left of the chain-wielder is attempting to make the orange-and-green hands gesture, although that sure looks like the latest version of the finger-and-thumb W the Badger fans currently flash.

Yes, Miami got to rock the bling early in the game (with a little help from instant replay) and after a few big plays and Miami taking a 14-3 lead, the ESPN announcers were getting into their usual patter about Southern teams and "athleticism" and "outside speed" and "five-star recruits."

Wisconsin linebacker Andrew Van Ginkel correctly anticipated a pass, giving Wisconsin the ball on Miami's 21.  Turnover battle even.  Wisconsin went on to score, and score again, and score again, going into the locker room leading 24-14.  Quarterback Alex Hornibrook gave the impression of a left-handed Aaron Rodgers for much of the game, making accurate passes in tight quarters.  Come the third quarter, and a Miami rally, cornerback Derrick Tindal intercepts a pass in the end zone: lead of 24-21 holds.  Badgers leading on turnovers.  At the end, another Wisconsin interception closes the game out.


Miami was expecting Georgia Tech but got Oklahoma.

In other words, the 10th-ranked Hurricanes, who lost the Orange Bowl 34-24 to the No. 6 Wisconsin Badgers on Saturday night at Hard Rock Stadium, never would’ve thought that their defense would get beat by sophomore Alex Hornibrook, a pedestrian passer who was named the game’s MVP.

After all, Wisconsin running back Jonathan Taylor entered the game with 1,847 yards and broke NFL star Adrian Peterson’s NCAA rushing record for a freshman in the game. Miami was surely expecting a ground attack, a la Georgia Tech.

On Saturday, however, Hornibrook made like Oklahoma’s Heisman Trophy-winning Baker Mayfield, completing 23-of-34 passes for a season-best 258 yards, a career-best four touchdowns and no interceptions as the Badgers (13-1) completed the first 13-win season in program history.

Mr Villa, can you say Aaron Rodgers? And ... glass half full department ... that late 1960s decline of the Packers came a few years after the mid-1960 decline of the Badgers. The mid-1990s revival of the Packers came a few years after the Badgers won a Rose Bowl.  And for all that talk about team speed, well, let Miami quarterback Malik Rosier have the final word.  “One time, the first interception I had, it was a great job by the guy. [Left tackle K. C.] McDermott tried to cut [Andrew Van Ginkel]. He did a great job getting his hands up and the ball just unfortunately wound up hitting him. They were fast, they were physical and they just did a great job of making me throw low-percentage passes.’’
Posted by Stephen Karlson at 16:19