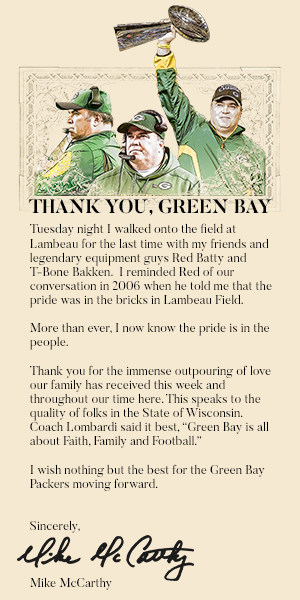 That's a screen shot.  The full advertisement is available at the Journal-Sentinel story.

That's despite Packer fans being perhaps more vocal than Packer management in wanting a coaching change, starting four or five seasons ago.

That's despite football being a business subject to market tests, which Our Intellectual Betters tell us is somehow less democratic than being in public service subject to electoral tests.

In politics, though, it's apparently OK to scold the electorate for not giving Our Political Masters the Results They Want.


People who weren’t political junkies were hungry for a non-politician, particularly one who spoke about bringing jobs back to long-forgotten places. The fact that Trump was not a traditional politician giving speeches that all the rest were giving was a plus. They weren’t being gaslighted (psychologically manipulated), they were going along on the ride.

I suppose part of being part of a pathological elite is never having to be self-aware.


The media elites like to think people were suckered because it is less painful than Democrats admitting how tone deaf they have become. Do they really think blaming voters is the best path back to electoral success?

So, here we are two years out and liberal media anchors are still trying to figure out what went wrong in the last presidential election. Here’s a hint for them – it isn’t because they were just too darn smart.

We've been pointing out the failures of the Wise Experts at least as far back as the 2004 presidential cycle.

The Berlin Wall comes down in 1989, and the Soviet Union goes out of business at the end of 1991.

Are general managers of football teams more responsive to their public than public officials are?
Posted by Stephen Karlson at 17:03