A NUDGE FROM SALENA ZITO?

She departs from her more usual Rust Belt coverage of industrial populism and cookie tables to call out Amtrak for forgetting that a train is not an airplane, even when that might be a major impediment to riding the train between Pittsburgh and the Nation's Capital.


Thanks to sharing the line with freight, that almost always means a 20-90 minute delay in leaving. Then there's the nearly eight-hour trip, twice what it takes me to drive there. Flying would only take an hour.

So why ride the rails? For starters, there's the joy of looking out your window to swaths of the countryside you’d never see if you were flying over them or cruising along the Pennsylvania Turnpike.

Where, until recently, you had the opportunity as a coach passenger to go aft to the dining car at first call for breakfast.


The post office in Meyersdale, Pa., is charming. The decay of the old brewery in Smithton, Pa., is hauntingly beautiful. The rapids of the Youghiogheny at Ohiopyle, Pa., are breathtaking. So are the sleepy little towns like Hyndman, Pa., and Paw Paw, W.Va., where the "long, long, short, long” warning whistle of the train at each crossing echoes off the mountains that surround these valley towns.

What happens inside the train matters as well. One of the true charming parts of the ride is the dining car experience. It isn’t just the warm, buttery grits and the crisp bacon. It is the people you meet because of the communal dining.

It was there on the Friday before former President Barack Obama’s first inauguration that I met African-Americans traveling from as far as California by train to attend his inauguration. From veterans of the civil rights movement to young people caught up in his aspirational rhetoric, we were all sitting, conversing, sharing stories, and experiences.

Last Monday, when I boarded the train for the first time this winter, I discovered the warm, buttery grits were no longer an option, replaced by a tub of yogurt and granola. In a box. Dinner now came in a box. So did lunch. Gone were the crisp, white tablecloths, and gone were the people who always cheerfully made whatever meal you wanted.

Gone, too, were the passengers to converse with: her essay includes a photograph of a vast, empty Cross Country Cafe. Like this. 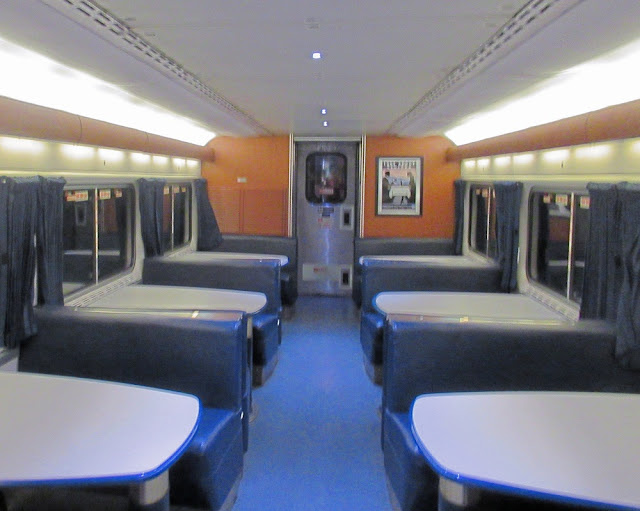 That's from my August trip, westbound, facing away from the pantry and trash bins.

She joined the ranks of disaffected travellers, taking up their complaints with the manglement.


My first reaction was: If I wanted to be treated the way I am on an airline, I would take one. I took to Twitter and Facebook to express my disappointment in my best mom tone.

A call to Amtrak at first met deflection. As is the norm with spokesmen these days, they declined to talk and tried to insist I put my questions in email.

Persistence, however, done courteously, sometimes does prevail. Apparently I wasn't the only objector. Amtrak returned to hot meals by this past Wednesday.

The crisp, white tablecloths and the jobs have not returned. In fact, a month ago, employees held a small rally in D.C. to protest the dining service changes and the threat of outsourcing the 1,700 union food and beverage jobs.

Change is inevitable. Change is important. But it is often spurred by erroneous assumptions.

As Peggy Noonan commented on Twitter, “Amtrak’s new management thinks trains are planes. A lot of us are on the train because we don’t want to be on the plane.”

Yes, and the mind-set that trains are planes extends to the pre-emptive cancellation of train service in the Official Region in advance of an incoming snowstorm.

Ms Zito has also added her voice to that of Passenger Rail advocates who have for some time suggested that current Amtrak president Richard Anderson and some of the other members of that Delta crowd take cross-country train rides and sound out the passengers.

At least for now, on the long-distance trains west of Chicago, there are still dining cars with white tablecloths and passengers who appreciate good food and conversation.
Posted by Stephen Karlson at 13:07