OH, THE RAILROAD IS THE MIDDLE OF THE HOUSE.

In the United States, the investor-owned railroads have sold stations for other uses, such as taverns, restaurants, all manner of retail stores, or museums, or breweries, and sometimes, the stations are moved away from the right-of-way for other uses.  The Minnesota and Northwestern depot in Sycamore, Illinois, for instance, is now a private house about a mile from where the Chicago Great Western once ran.

Sometimes, the old station buildings have rail cars incorporated, or the rail cars are parked near the tracks with purpose-built structures. 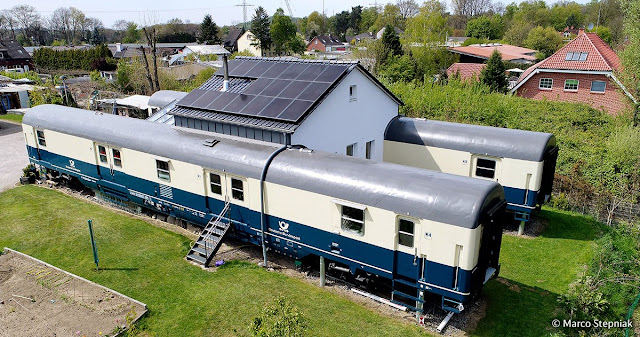 The article, which is in German, is in part an offer of rolling stock for sale, either to repurpose as a house, or for preservation.  It does not appear to note that rolling stock is heavy, and that the person who aspires to live in a repurposed rail car has to pay as much attention to the subroadbed and the drainage thereof as a conscientious roadmaster does.
Posted by Stephen Karlson at 09:47