The Chicago Aurora and Elgin purchased ten interurban coaches that went into service after Victory.

One has returned to regular service at Illinois Railway Museum.  Here it's running as the "Batavia Shuttle" meeting a four-car mainline train. 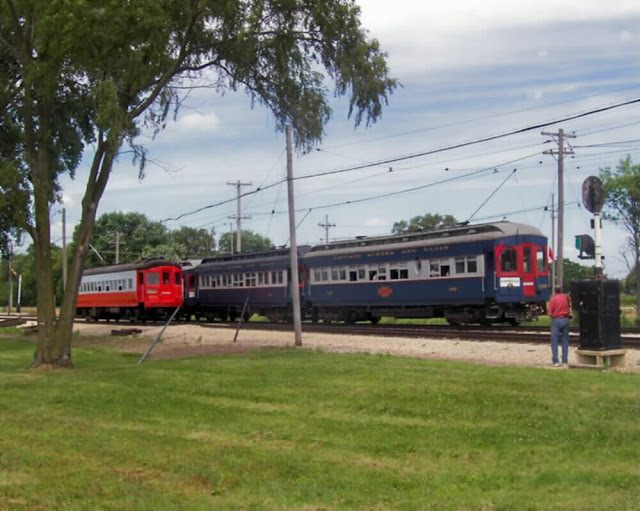 The fleet of cars only ran in revenue service for eleven years, as Our Political Masters thought the future was limited-access motorways.  That meant a reconstruction of the Metropolitan West Side Elevated to run in the median of the Congress Street (now Eisenhower) Expressway running downtown through the Dearborn Street subway.  That was effectively the end of the Aurora-Elgin as those wooden cars couldn't go into the subway.

A lot of the cars got second life in preservation, with most of the post-War cars going to Gerald Brookins's Columbia Park and Southwestern, until subsequent owners of the complex he built decided a full-sized train set was an expensive luxury.  Thus three of the cars returned to Illinois.

There's a chance to repatriate a fourth.  The Electric City Trolley Museum in Scranton has decided to concentrate on restoring regional rolling stock, and their car 453 is available, provided members and friends of the Illinois Railway Museum dig down.  Moving these cars and restoring them to good running order (the 453 is in pretty good shape for not having run in probably sixty years) doesn't happen by magic.

Should this project come through, the museum will be able to run a five car Aurora-Elgin steel train.
Posted by Stephen Karlson at 10:57