For the third Saturday in a row, here is a not-to-be-regular Saturday bridge column.

I'm still not sure what the bots that provide the entertainment are doing.  Sometimes a bid of two of a suit is a cue to bid two of the next higher suit.  Sometimes a bot will jump to four of a suit, or something else, and there's nothing.  (Perhaps I will have another experience of having to play in five of something and going down seven!  That's something you wouldn't see in the newspapers!)

On occasion, though, everything works out for the best. 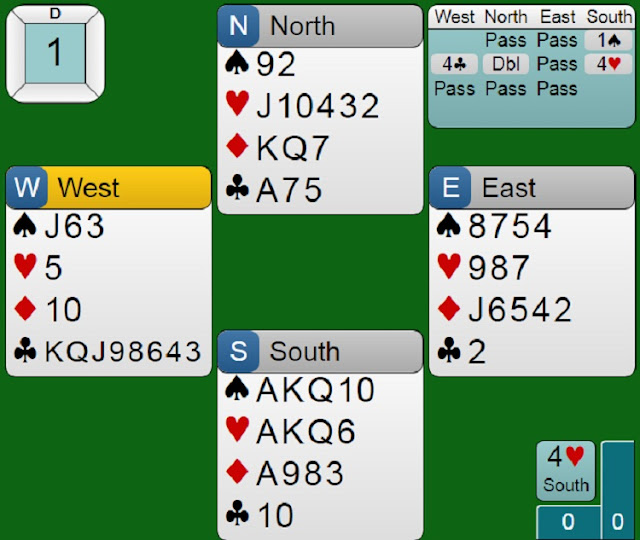 North deals.  I have three aces, 22 points in high cards, and a singleton.  Perhaps 1♠ is mauering, a more experienced player would start at two.  West goes to 4♣, yes those are eight cards, but there's only seven points plus the two singletons.  It's useful, though, to anticipate those horrendously unbalanced hands: if you're holding four as declarer and dummy has three, it's probably prudent to expect something other than the defense is split three each.

The scoring conventions of contract bridge, however, encourage prudence in bidding.  Contract for too many, suffer a penalty of fifty points a trick (this becomes worse if you've been doubled, or if your side is vulnerable.)  Contract for too few, pick up bonuses for the overtricks, which are invariant to vulnerability.  The solitaire game uses Chicago four-deal conventions, which means none of this above the line, below the line complications, and vulnerability rotates: nobody on the first deal, North-South on the second, East-West on the third, everybody on the fourth.

North doubles.  I could have just let that go, and play for penalties, although that suggested enough support in other suits to run Four Hearts, which is a game value contract.  And so it begins: no losers in Hearts, one possible loser in Spades, one possible loser in Diamonds, with a ruffing opportunity there, the Club Ace takes care of the Ten.

I recently discovered that the game lets me review all the plays, which I did to obtain the record, before playing another game.  No doubt the experienced players can recall all the cards they ran in all their games.

The Ten of Hearts is an opportunity to discard the Diamond loser, now the Ace of Clubs pulls out the Two, Ten, and King!  (Would that be a signal to an East with some Clubs to not be afraid to lead them, that is, if East could ever secure the lead?) Now the remaining Diamond winners: North King followed by the Seven to South's Ace.  West is still pitching those high Clubs.

Contract made, and we still haven't played the Spades. South leads; it is my practice to lead the lowest controlling cards first, thus Queen, King, and when the Ace smokes out the Jack, the Ten picks up all the trash!  Note, though, that if the fourth Spade was with West, or if East had the Jack, that garbage time trick would have gone to the defense.  That's something the newspaper columns aren't always explicit enough about: for a finesse (meaning leading from a low card past a high card to win a trick with a lower card) to work relies on the cards falling just right.  In the hand I played, there was plenty of brute force to get the job done.
Posted by Stephen Karlson at 14:35