THEY DON'T KNOW WHAT A BUSY RAILROAD IS.

We've been paying attention for some time to the efforts of the people of Glenview, Illinois, to prevent the construction of a recessing siding along The Milwaukee Road, or, perhaps, to get it built in somebody else's back yard.  Wisconsin's Department of Transportation has been seeking an expansion of Hiawatha services from seven to ten round trips a day for some time.  That's true even though at the time of the article, the state's governor was train-hostile, corporate-welfare optimistic Scott Walker.  "With the additional round trips, ridership is projected to exceed 1 million. Those figures do not include a potential ridership boost for Foxconn Technology Group’s planned Mount Pleasant, Wis., factory, which could employ up to 13,000 people and is near the Hiawatha’s Sturtevant stop."  Those additional trains, however, or the occasional freight train recessed in the holding siding, are apparently so repugnant to Glenview officials that they would rather spend first $400,000 and then another $105,000 to lobby the relevant officials against building the siding and adding on the trains.  Glenview officials have also suggested that the current trains are running, on average, less than half full, and perhaps Amtrak could strengthen the formations of the trains, primarily on commuter-train-like schedules, that serve the largest loads.  Never mind that "Ridership has more than doubled since 2003 when the service began providing seven round-trips daily."

The controversy isn't easy to follow, as I'm not sure whether this proposed siding is along the Union Pacific's freight bypass that trains off the former Milwaukee Road (now Canadian Pacific) use to reach freight yards to the west of Chicago: that might be what the references to "additional retaining walls" in some of these articles are about, or if it is along the line Amtrak and Metra use to recess the freights until the passenger trains get by.  Sometimes keeping that line fluid gets tricky in the Northbrook area under the existing schedules.  This article suggests there might be either, or both.  "Officials and North Shore residents have expressed concern about the proposal to build either a 10,000-foot freight train holding track on the east side of the two existing Metra train tracks or an 11,000-foot freight train holding track on the west side of the existing tracks from Glenview to Northbrook."


It appears as though delay is still the deadliest form of denial.  Last October, then Illinois Governor Bruce Rauner put the Hiawatha expansion on hold.

The Wisconsin Department of Transportation, the lead agency on the project, is conducting an federally-mandated environmental assessment of the project, along with IDOT and the Federal Railroad Administration. Opponents of the expansion have called for a more in-depth environmental impact statement to examine the full effects of the project in greater detail.

The mind boggles at, for instance, residents of neighborhoods adjacent to the stroads and expressways the residents of Bannockburn, Deerfield, et. al., use to get to where they want to get taking action to control traffic impacts, but I digress.  Those residents apparently have enough influence to get the Illinois Department of Transportation, despite a change in the governorship from Mr Rauner to J. B. Pritzker, to withdraw from further participation in expanding Hiawatha service at this time.

It's enough to provoke Classic Trains columnist Kevin P. Keefe to suggest there is something called a NIMBY tax, a "more common cost of getting anything done;" and Streetsblog's John Greenfield is of like mind.

Mr Keefe's reflections on railroading practices past are more salient.


It’s ironic that a minor expansion of infrastructure was enough to set off the opposition, given the density of rail traffic already moving through Glenview. Every weekday, Metra runs upwards of 50 commuter trains through the village, along with Amtrak’s 14 Hiawathas and 2 Empire Builders. Throw in maybe a half dozen or more Canadian Pacific freights and you have a classic hot spot. And they haven’t gotten used to this by now?

Of course, if your memory is long enough, you might be bemused by Amtrak’s struggle to just get to 10 daily Chicago–Milwaukee trains. Sixty years ago, travelers over these 85 fast miles had three railroads to choose from, and more than 43 trains each way. It was one of the most competitive passenger-train corridors in the U.S.

It's probably more relevant to Glenview residents that at the inception of Amtrak, there were three, un-named round trips plus the Builder, and fewer, shorter suburban trains: thus it looks like more trains now, and the freight trains have undoubtedly gotten bigger.

The way it was, once, involved more trains running faster.  I've alluded to the working timetables of the 1960s: here is an excerpt from the one that took effect with the return of Standard Time in Illinois (it was in effect in Wisconsin from the end of September), and there was still an Olympian Hiawatha (combined with the Afternoon Hiawatha westbound) with a 78 minute timing inclusive of a "stops to receive passengers" at Glenview; that timing made possible by tracks signalled for 90 mph, Mayfair to Lake, and by recessing sidings at Lake, A-68 near Caledonia, Sturtevant, and eastbound at Northbrook that since been removed.  In a way, though, all Wisconsin and Illinois seek to do is restore the kind of operating conditions that prevailed before Our Political Masters thought putting all that money into expressways and stroads would improve mobility. 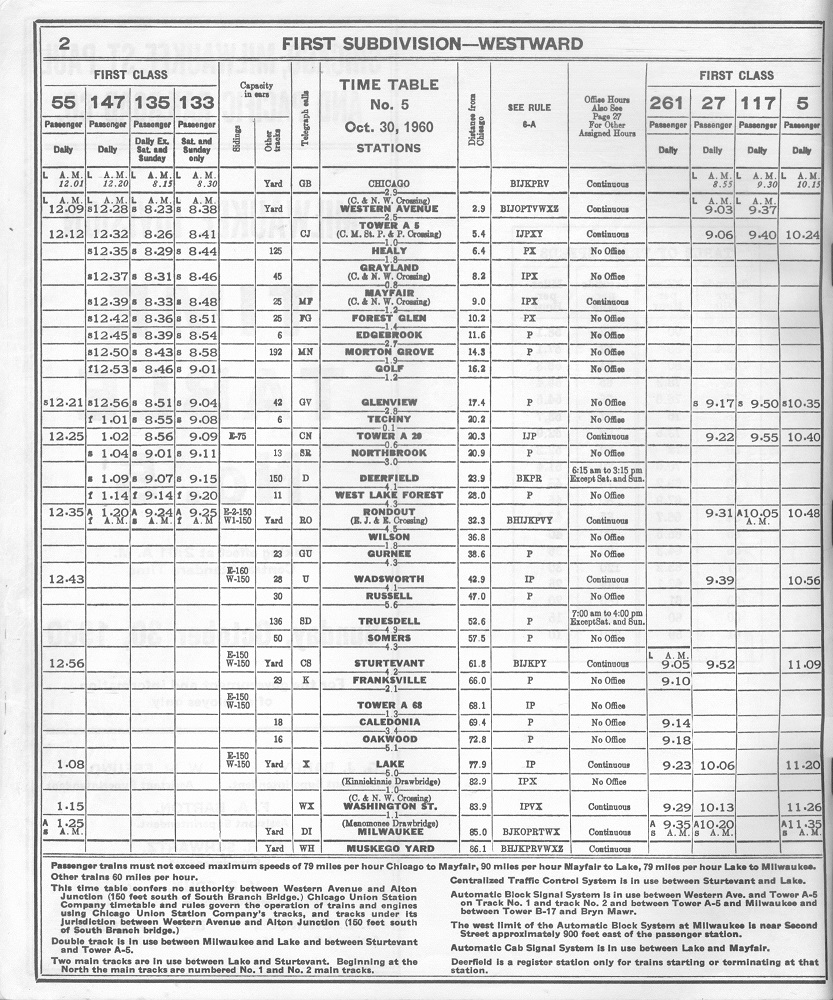 In this timetable, the reference to Deerfield being a "register station only for trains originating or terminating" reflects the suburban trains that, to this day, turn back there, as well as to provide protection for the local freight trains, called "patrols" in Milwaukee Road locution, that were still working local industries (including the Sara Lee bakery.)  Note also the regional trains into the hinterlands: 261 is what remains of the Southwest Limited, in the timetable as train 26, Savanna to Milwaukee by way of Freeport, Rockford, and South Beloit; 117 is the Varsity for Madison; and Five is the Morning Hiawatha, still an 80 Minute Train.

Mr Keefe is still asking for more.  "But is it too much to ask for additional Hiawatha service, especially when the market is crying out for late-evening service? Is 10 trains some kind of bridge too far? Running more trains would be great for the region and a boon for what is now nearly a million annual riders — provided an outraged bedroom suburb doesn’t get in the way."

Despite the procedural setbacks, Illinois and Wisconsin officials still want to increase the frequencies.  There is an order of regional rail coaches for California and Illinois under construction, and obtaining another rake (with more coaches, please?) is not out of the question.

The problem, though, is that finding the resources or the imagination to assuage Glenview's deputy village manager, Don Owen, is unlikely.


Owen said the village is frustrated because the two departments of transportation have refused to study the impact of freight traffic on Glenview and other north Chicago suburbs. The departments have said the Hiawatha expansion plan will not lead to an increase in freight traffic.

There's this practice in transportation planning called alternatives analysis that the Wisconsin Passenger Rail authorities had to go through before they put in the now-dormant expansion plan for the Hiawatha service.  That meant they had to rule out any use of the former Chicago and North Western routes for further consideration.  The easternmost route, using the old passenger route, isn't practical as it requires substantial work north of the Oak Creek generating station, and it leads into North Western Terminal, er, the Ogilvie Transportation Center, where no other Amtrak trains go.  There is a route to the west, using what I call the Freight Main (it will host a Big Boy at the end of July, stay tuned) that would provide a route back into Union Station with the construction of a connecting track on the north side of Glenview.  But look at how the planners rule out that line as a passenger main.  "Although the UP Milwaukee Sub was originally constructed as a double track freight‐only railroad to divert freight trains from the busy passenger and commuter lines, it is a busy single track freight corridor today. Operating intercity passenger rail service over this key freight train route would result in deterioration of freight service and delays to intercity passenger rail trains."

So put the second track back on the Freight Main and move the Canadian Pacific freights onto it.  Look at the timetable: note that "C&NW Crossing" at a place called "Washington Street" just south of the Milwaukee Depot.  There no longer is a crossing there, as the Milwaukee to Madison line is now a bike trail, but Union Pacific still serve a few industries in the harbor area, and there was once a connecting track to bring North Western passenger trains into The Milwaukee Road's station.  Find a way to get Glenview, the other northern suburbs, Union Pacific, and Canadian Pacific into an agreement to turn the old Milwaukee Road line into a passenger only railroad, the old Freight Main into a jointly used path for Union Pacific, Canadian Pacific, and haulage freight trains, and build some additional recessing sidings along the Freight Main for trains being held out of Proviso or Bensenville.  That might even be more cost-effective than building a third main track along Metra's tracks north of Northbrook.

Transportation planners have previously contemplated upgrading the Freight Main.  I'm not sure if any of that work is still active.  In my archives is a Chicago and North Western working timetable from the end of October, 1956 (again, the end of daylight saving time in Illinois) when the freight main was double track.  There were westward sidings capable of handling 85 forty foot cars at Upton and 90 cars at Rawson, which is just southeast of Milwaukee's airport.  There was a 73 car eastward siding at Blodgett, which is approximately Lake-Cook Road these days.

Come up with a way of keeping all but the local freight trains on the Freight Main, and the problem of needing a space either along the Hiawatha route or somewhere along the Freight Main to keep a Canadian Pacific freight train from interfering with either a passenger train or a Union Pacific freight train goes away.  There's still no guarantee that the freight trains will get through Glenview quickly, as the Freight Main crosses another busy Metra line as well as Canadian National at an interlocking called DeVal before reaching the approaches to the Canadian Pacific and Union Pacific yards; but  recessing sidings somewhere along the Freight Main, perhaps as far north as Bain or Pleasant Prairie, which are built up with warehouses, light industry, and Foxconn's project, might keep the freights from offending ears in Northbrook and Glenview.  Just put the holding tracks near an all-night eatery!  That's how Union Pacific rolls, or not.
Posted by Stephen Karlson at 11:31