Along the border areas of the Great Lakes, Canada Day on the first and Independence Day on the fourth are good reasons to have a week-long party.  Unfortunately, thirty years ago was the last such week-long party at the Crystal Beach Amusement Park.  "It was a simpler era when, during the summer, the Peace Bridge border checkpoints were manned mostly by schoolteachers on summer break who might or might not ask you where you live before sending you on your way."

Follow the link for some home movies made into streaming videos of The Way It Was.

Have a Minute Maid Orange [pop] with Erin Moran and a ride on the Comet, or take a virtual ride on the Cyclone. 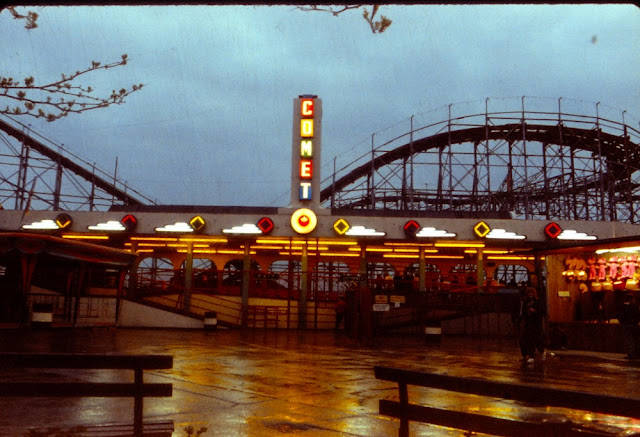 If it's raining, play a few bingo cards or roll some skee-ball.
Posted by Stephen Karlson at 17:45

As a former Buffalonian, I wonder why you post about Crystal Beach. It doesn't seem like it was too close to where you roamed.

It wasn't that close, and it's on back roads east of Brantford if you're coming from the Detroit area.

Memorial Day weekend of 1983, I met with some Wisconsin coaster enthusiasts of long acquaintance who were headed there in fear that would be the park's final season. These enthusiasts had enough clout with their organization that the 1984 convention was there, and I worked in a few other trips, sometimes with company out of Detroit, before I left.