THE PUMPKINS HAVE LONG SUCCUMBED TO THE FROST, BUT THE FODDER IS NOT YET ALL IN THE SHOCK.

The day after Hallowe'en, the pumpkins usefulness was mostly over, anyway, apart from those canned for pie filling, and at the time only fifteen percent of the local crop was in the bins.

There have been a few good weeks for catching up on getting the harvest in, and, as I feared, a dwindling chance of that snow on the ground at Christmas. 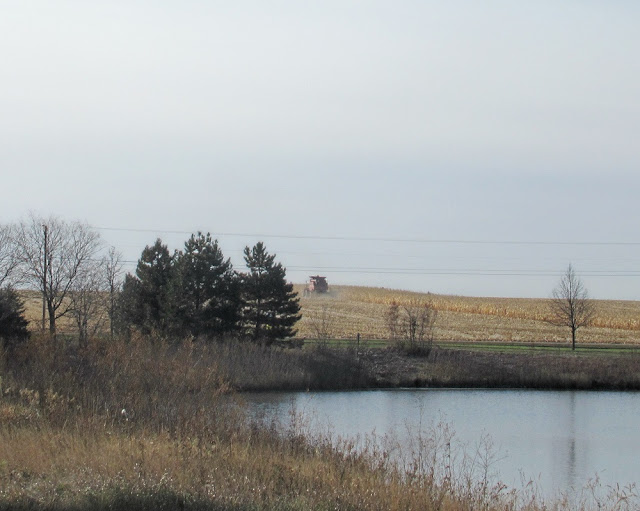 That's the view from the back deck, between the Hallowe'en snow and the Armistice Day snow.  Those fields have been combined, and, judging from the mud tracked out of the fields on the mile roads, the work is getting done, but it's slow work.


DeKalb County Farm Bureau Director of Information Mariam Wassmann said wet soil leads to soil compaction. Soil compaction is when the equipment presses down on the soil and is harder to avoid with the softer soil the rain created. It also can affect the yield.

“The yields were reduced in the compacted areas,” Wassmann said. “They’ll see a yield loss where they tore up the ends of the fields. They’re not getting as good a crop as the rest of the field that didn’t get torn up.”She said in a normal year, farmers can wait for the soil to dry, but this year has made that difficult.

“The farmers are at that point where they’ve got to get [the crops] out,” Wassmann said.

Wassmann said the trucks used to haul grain could not go into the fields because they’ve been drenched in rain. Instead the trucks were loading the grain in the road.

Better to get something for what you have raised than to take a total loss, I suppose.  The efforts to get the harvest in have stressed the drying sheds.  At the moment, everyone involved is hoping for a more normal growing season, with April planting and October harvesting, in 2020.  A normal market might be too much to hope for.

I'm not going to claim that the section of track alluded to in this post was installed and powered up by harvest time. I have installed it and applied power, but winning that race on a technicality doesn't appeal.
Posted by Stephen Karlson at 13:49