FAREBEATERS' PARADISE? The first weekend of Christmas shopping brings lots of people into Chicago. Metra sent a ten car train to protect the 10.05 Geneva-Chicago, and by the time it left Elmhurst, nearly all the seats were taken. The conductor and collectors didn't have sufficient weekend passes, although they sold one-way tickets for people who would pay more for the weekend pass than for two one-way coupons. I wonder if there's a way of auditing the one-way ticket sales from Chicago to determine how many people might have taken advantage of the situation to buy only their return ticket.

At Chicago, I bought the weekend pass and headed to Kenosha, where the heritage trolley is running. It has been tricked out for Christmas. 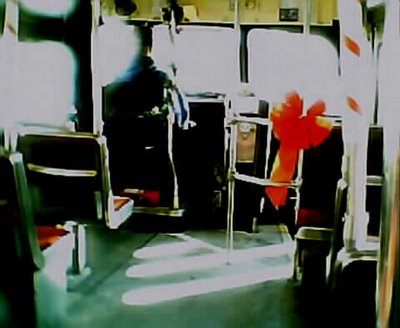 I brought along the Canon with the old-style film and a light meter I can manage. It was a gorgeous day for trolley pictures. This one from the cheap digital will have to serve for now. Perhaps some real pictures later.

The other Metra trains were also doing a good business hauling shoppers around. The Kenosha 400 came in a few minutes late after setting down large crowds at the North Shore stations (from which relics of the old North Shore Line can still be seen if you know where to look) and on the return trip the three open cars were pretty well filled, including shoppers making short turns from Lake Bluff or Lake Forest to Evanston or Ravenswood. If the roads are miserable enough, people will use the trains.

I used the train rides to do some reading and will soon post more book reviews. I still plan to meet the Fifty Book Challenge. Reviews 42, 43, and 44 are in preparation, and 45 is in progress.
Posted by Stephen Karlson at 23:05