A REWARD FOR FINISHING THE GRADING. I was clearing the snow left over from Thursday's storm in order to make Sunday's cleanup of the snow currently falling when the letter carrier turned up. "Oh, you're here. Could you sign this? I'll get the package from my truck." It's a delivery confirmation slip for a shipment of Great Western Collett "Excursion coaches" available ready-to-run from Tower Models. (It's getting harder and harder to be a scratchbuilder either in North American or British image with so much ready to run stock on offer.) The cars come with working link couplers, and it made sense to unpack them and run an some acceptance trial. You're looking at the D127 Brake Corridor Third and the C77 Full Corridor Third. I figured these would be enough of a test for today. There is also an E162 Corridor Composite for this set. 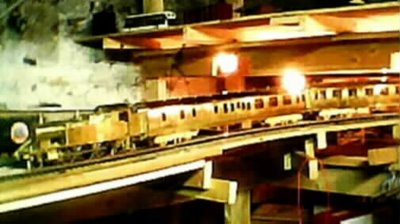 If the boys at 11-D read this, they'll discover that some adults also appreciate that "there's the Great Western Way, and then there's the Wrong Way." The Great Western Way would be to assign a "Small Prairie Tank" to a job a bit more demanding than Oliver or Duck could handle, such as getting up the (totally unprototypic but required by the constraints of the basement) Gloucester Hill. The train is passing the West Gloucester lighthouse. I'm running it in the English fashion, on the left-hand, inward track, as there is an outward home road train occupying the outward main through Gloucester. 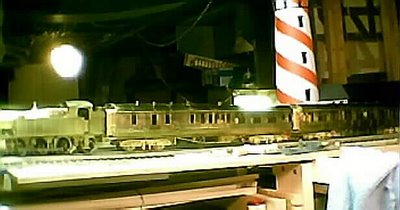 Here, we have to allow for some artistic license running a train into a station without floor-level platforms. The motive power is heading into the release road, which, at Rockport, Massachusetts, would let a locomotive escape from a train arriving on one of the right-hand tracks. 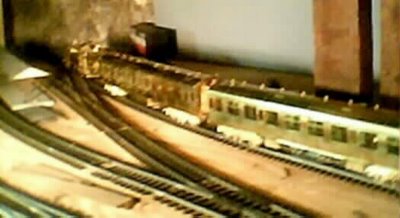 The prototype cars are 61 feet long, which works out to about 67 feet for a North American O Scale layout. They will require a bit of tweaking of the couplers and the buffers to avoid buffer lock and string-lining on a 52" radius curve ample for my 85 foot U.S. design Pullman-Bradley coaches. Pretty cars. Must get the full Great Western and British Rail rake together and show off "The Mayflower" for you.
Posted by Stephen Karlson at 23:29