IT WAS COLDER 43 YEARS AGO. The North Shore Line quit early in the morning of January 21, 1963. The day was appropriately clear and very cold, with snow on the ground. This snow arrived overnight, to the surprise of the local weather forecasters. The roads between DeKalb and Elburn and Geneva had received their first plowing but no salting when I left this morning. (Hereafter the train trips start only 15 miles from home. The new Saturday schedule offers a better connection to the Hiawatha, or to the South Shore.) Twenty-five miles of that beats a somewhat longer drive all the way to Milwaukee. And two book reviews are in the works. 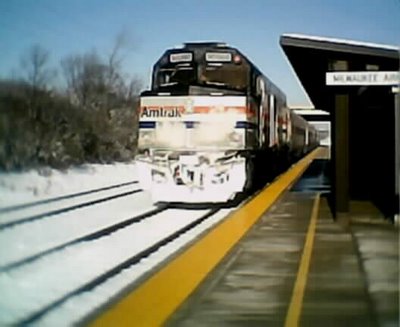 Train 333 on the last lap into Milwaukee.

My return to Chicago was not as snappy as the one I reported on last month. There were some speed restrictions for malfunctioning crossing protection.

At Chicago, the waiting room was closed off for a formal party (Amtrak will let people hire this hallfor a fee.) 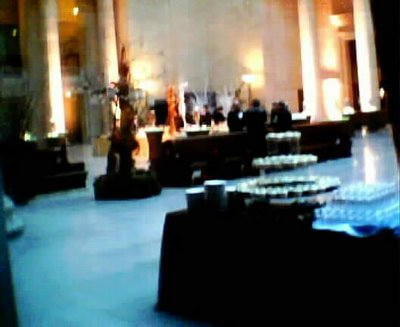 I didn't ask what it was about. The photo looks southwest. At the north end of the hall there was the Mother of All Flat Screen TVs with somebody (no, it wasn't Big Brother) describing the activities of the organization that had hired the hall. I didn't want to peek through the curtains too long.
Posted by Stephen Karlson at 22:43