WHY WE FIGHT. Best of the Web finds humor in the fading of Moscow's Victory Parade. But a slideshow by Moscow Times photographer Vladimir Filonov includes instructive images for all time. 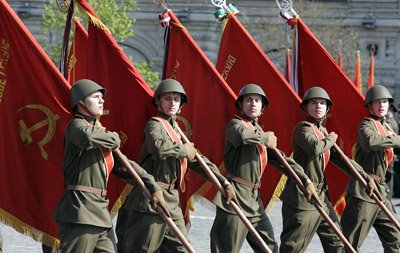 Yes, the traditional forms are still on display. 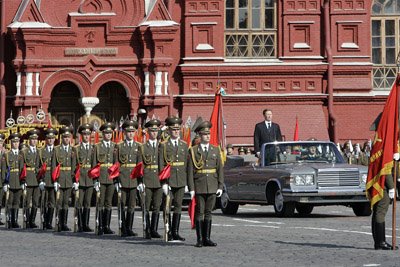 Bear in mind, though, that the Soviet Army first defeated the most technologically sophisticated tyranny of its time, in a war whose story is still not well known. (I have some book reviews in progress that might help reverse that.) More recently, the Russians shucked off the most intellectually sophisticated tyranny of its time, in a transformation whose outcome is still uncertain. There are now fences behind the Historical Museum on Red Square and tanks can no longer be staged on ul. Tverskaya to roll past the Politburo. That Chaika might be from the late-Evil Empire fleet of Kremlin staff cars. (What has happened to the Chaika and Zil works?) Some of the German battle flags that were flung at the Politburo's feet in 1945 have been sold to raise money. But never mind the geopolitics. This picture captures it all. 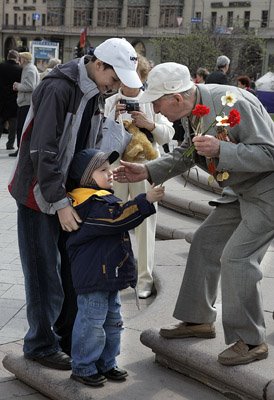 A picnic, an opportunity to reminisce, a chance to tell stories to curious youngsters. The fight is to earn the time and space for a life of one's own, including picnics.
Posted by Stephen Karlson at 17:52