AT LEAST THEY DIDN'T NAME THEIR BABY DAGNY. I must be the last person in the world to learn that Angelina Jolie and Brad Pitt have been contemplating a movie setting of Atlas Shrugged. I got the news from View from a Height, who would like to see the movie done properly if it is done at all.

Would you even center it around a railroad anymore? Does "motive power" still inspire the way that it did in 1957?

Yes, if you present it properly. And there is still much to recommend in heavy industry, although the real impediment to dynamism might be set-in-their ways management, such as the engineering team at Bethlehem Steel that came up with a thick binder explaining all the ways continuous casting of thin slabs from recycled metal would not work. Moreover, we're not living the Carter Presidency any more, which makes the next paragraph more pertinent.

After all, people will leave the theater having seen a world in ruin, and immediately hop into their ultra-safe cars, download the soundtrack into their iPods, use their phone-PDAs to get directions to the nearest pizza joint, and then check their email on the way there.

These are the good old days, dear reader. But that's not to say the message ought not be kept in front of people.

It might help alleviate some of the current economic illiteracy. Released in 2008, it might just remind enough people of the actual cost of all that "free" stuff the Democrats will be offering. Assuming it's set in the future, a few numbers from early-21st-century Eurosclerosis might connect it to the real world. And the sheer number of entrepreneurs out there might assure it of a sympathetic audience.

Mr Sharf linked to some Atlas Shrugged-inspired artwork, including the John Galt Line. 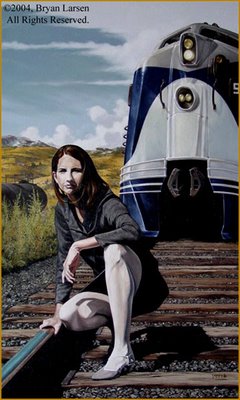 Bryan Larsen's Motive Force.
There really ought to be a flag on that diesel's nose.
Posted by Stephen Karlson at 13:29