H. T. W. S. S. T. S. K. Among the Da Vinci Code related stuff I picked up last month is The Book of Hiram, the work of two British academicians who were sufficiently curious about Freemasonry to join the local lodge, and their work is an attempt to make sense of the received rituals and traditions of Freemasonry (without disclosing any of the passwords or handshakes or secret cyphers.) Here's a quick Book Review No. 18.

The commonalities the authors discover among ancient belief systems are worth further study. Ancient astronomers among a civilization called the Grooved Ware People paid careful attention to the movement of the stars and planets, and authors Christopher Knight and Robert Lomas suggest that their observations influenced calendric calculations in Norse, Celtic, Egyptian, and Middle Eastern astronomies. An appendix to the book suggests a time-intensive way of calculating an astronomical yard (you have to spend a lot of time stargazing, to create a pendulum of the right length to divide the time it takes a star to subtend 1/366 of arc into 366 equal intervals -- if you approximate these with 1/360 and 360, you get the modern compass and you might get approximately the Imperial yard) that turns up as a basic measurement in many a megalithic structure. (The authors do not tackle the the anatomical basis of the cubit. Perhaps that is work for future research.)

An aside in the appendix suggests the possible origins of the astronomical calendar and Solomon's Seal. It is easy enough to construct a regular hexagon and a Solomon's Seal with straightedge and dividers. 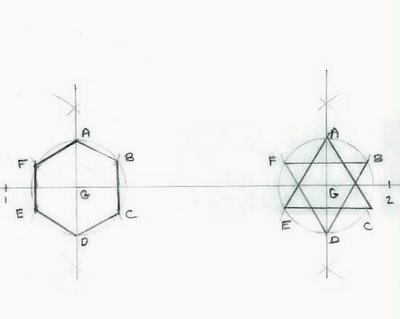 My working tools. I have an Entered Apprentice's knowledge of the contents of the green box, which, as far as I know, is not a Megalithic invention. (Neither is central place theory, but I promised a brief review.) 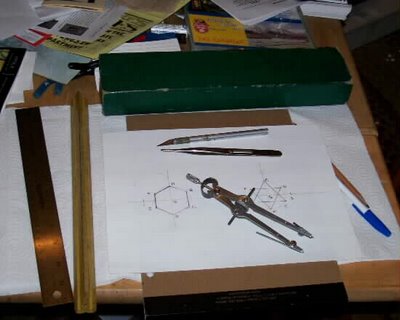 Hexagons -- might it be possible to further bisect angles and subtend arcs so as to construct something that is approximately a calendar without taking the 61st part of a chord? Like the 64th part, and then adjust observationally?

In the days before light pollution, astronomers had more opportunities to observe planetary movements and planetary conjunctions. Venus is the key. It is the brightest of the planets, and its path relative to the Sun has extrema that can be summarized in a five-pointed star that's traced out over forty years, and its path over shorter intervals traces out what looks like cow's horns. (Hence the cults of the Minotaur and one interpretation of Moloch, and the helmets attributed to Vikings -- I was under the impression Richard Wagner came up with that?) At 480 year intervals, Venus and Mercury are in conjunction in the morning. Prior to light pollution, this conjunction just before sunrise, which the authors suggest is an explanation of the Shekinah, might have been quite spectacular, as well as quite rare.) One such conjunction occurred, according to the authors' calculations, near the winter solstice of 7 B.C. Hence, the authors offer an interpretation of the Christmas Story that is at odds with Christian tradition. (The short form of the Christian counter-argument is here, and I have a longer counter-argument among the stuff to review.) This conjunction recurs at 480 year intervals, hence 40, 480, and 1440 year cycles figure in Jewish, and Norse, and Masonic traditions. (The work might be more convincing as history of science if Hindu cow traditions and Chinese astronomical observations received more attention as corroborative or supporting work.) And a "statistical test" in which an actually existing carving, based on Masonic tradition is given six or seven attributes, each of which is present or not based on a coin flip, fails to convince.

So what, then, of Masonic traditions? The authors suggest that the Masonic rituals were "an ancient memory of a science that drove human ambition and achievement." (p. 334.) But the success of the Freemasons as a vanguard sowed the seeds of their own destruction.

As they achieved ever-greater success, their towns and their countries grew more prosperous, and new, more specialist ways of working together came along. Freemasonry had fought for and attained an age of reason and personal freedom. Now people could develop themselves and their communities without the need to meet in darkened rooms, wear strange regalia, and recite odd-ball ritual.

(Page 337.) By definition, a vanguard of free people (e.g. Free-masons, Free-thinkers) loses its power precisely to the extent that people become free to associate and to think for themselves. Complex adaptive systems and emergence and all that.

The ethnography comprising the main body of the book is followed by something called "The Masonic Testament," in the form of Biblical chapters. This is apparently based on a study of ancient Masonic rituals, the original sources of which are available at The Web of Hiram. I have a few questions about the history (Darius and Hadrianus active in Jerusalem when both were preoccupied with European events?) but little to add.
Posted by Stephen Karlson at 12:36