IT WAS WORTH THE WINDBURN. South of the State Line: raw and rainy. To the north, sunny, breezy, and cool. The nephew's Cub pack had a baseball outing planned for the day.

Youth baseball has certainly changed since 1964. Heck, I don't recall any adult playing fields this nice, for the 1964 equivalent of $1000 for two hours, or any price. 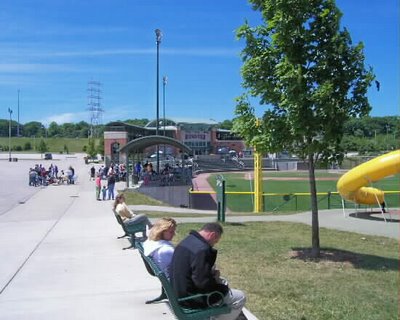 The home plate at Helfaer Field is in the same spot as home plate at Milwaukee County Stadium. It's 200 feet to the outfield fences. Adults playing here probably strike out a lot, attempting to kill the ball over those fences.

The replacement to County Stadium is Miller Park. 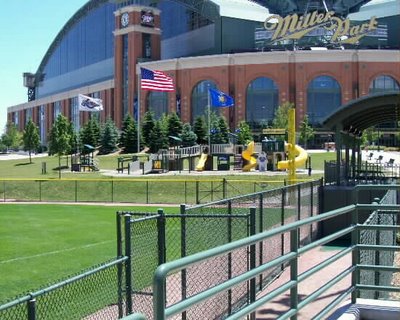 There's a tot-lot called "Bernie's Dugout" for the amusement of youngsters waiting their turn to play or sitting out because it's brother's or sister's team playing.

Miller Brewing is to the northeast. 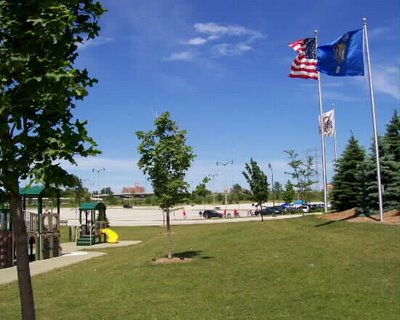 Compare with last week's photo. The long-demolished Wells Street Viaduct ran close to the brewery. (Not far too the northeast of the brewery is the real Cold Spring Shops, now an industrial park.) The relocated Stadium Interchange dominates the middle ground, with Stadium parking receiving early-arriving Cardinal fans. The power line marks the location of the Rapid Transit Line, which crossed the Menomonee River immediately east of here. The Rapid Transit closed just before the Braves moved to Milwaukee, although there was streetcar service via the Viaduct to the 1955 All-Star Game and the 1957 World Series. 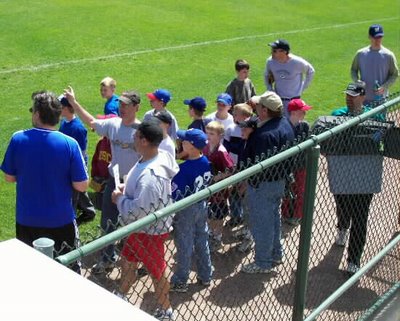 Before the game comes the team meetings. 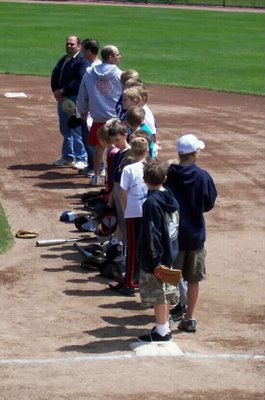 It's a Scouting event, complete with National Anthem and two-fingered salutes by those in uniform. 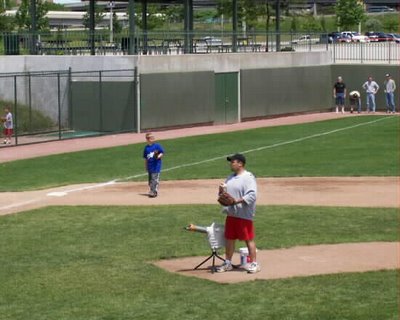 Cub Scouts come in several ages and sizes, so to give everybody a shot at reaching base, everybody batted once per inning. The pitching machine might have been more effective than the Cubs' bullpen. But what are those adults doing on the warning track? 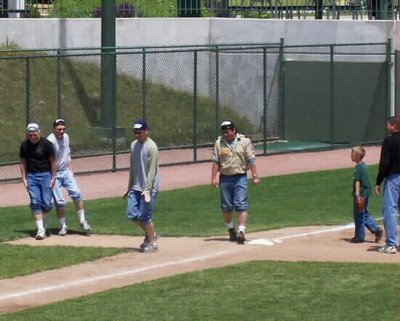 A baseball game in Milwaukee has to have a sausage race. 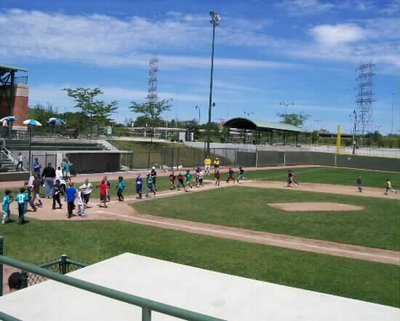 And at game's end, all the kids got to run around the bases.
Posted by Stephen Karlson at 22:21