We have been doing a little research. Both the Douglas Line and the Paulina Connector were once part of a greater system built as the Metropolitan West Side Elevated. This system began (or ended) at a terminal on Franklin Street just east of the South Branch of the Chicago River and continued west on a four-track structure to the current alignment of the Paulina Connector/Douglas north-south leg. There, trains could proceed west on the Garfield Line (no longer there but rebuilt as the Congress [also Blue] Line). Trains could turn south on the Douglas, or they could turn north on the Connector and go to the Logan Square Line (also Blue today) which also had a branch to Humboldt Park.

Yes. Today's O'Hare Airport line uses bits of the old Metropolitan between the north end of the Dearborn St. Subway and the new Logan Square station just before the line takes to the median of the expressway. 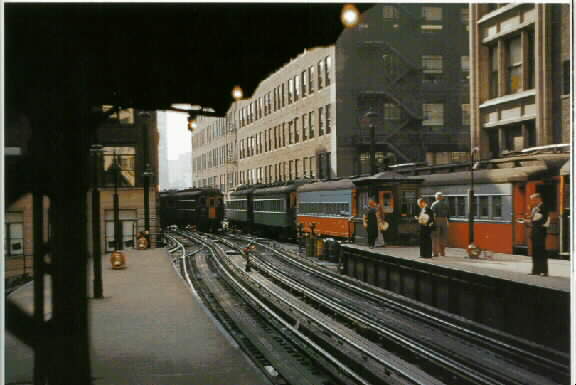 That Franklin St. terminal was known in Chicago Rapid Transit days as "Wells Terminal," and it was also used by interurbans of the Chicago Aurora and Elgin enroute its namesake cities as well as Batavia, and up to 1938 Geneva, with some locals turning back at Wheaton. (Most of this right-of-way is now the Illinois Prairie Path bike trail.)

Although this photo appears to be of a well-detailed O Scale layout, it is a view of the Wells Terminal.
Posted by Stephen Karlson at 12:34