TO THE EDGES OF THE LAKE DISTRICT. Antioch, Illinois, is one of the gateways to the Lake District of Southeastern Wisconsin. 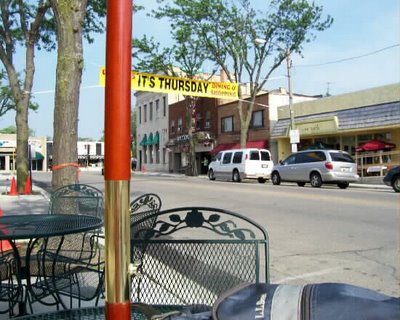 There's a taqueria downtown with sidewalk tables, good grub, and some nice kids running the place.

The high street includes the State Line's usual cluster of antique shops and the trattorias that cater to the yuppies patronizing the antique shops. 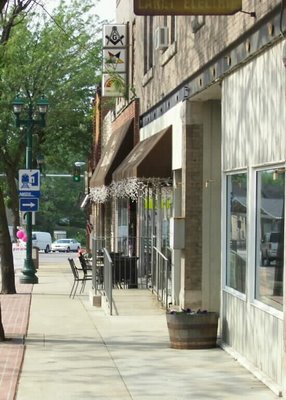 But what secrets do these signs conceal? I'm not sure if there's a Masonic lodge upstairs. The ground floor is one of the aforementioned restaurants.

There are some vintage buildings on the north side of downtown. 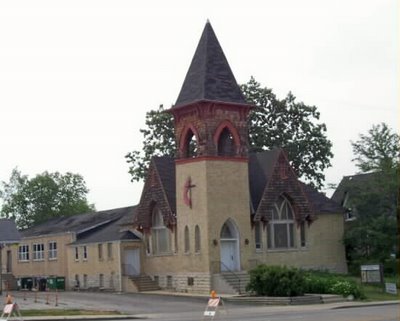 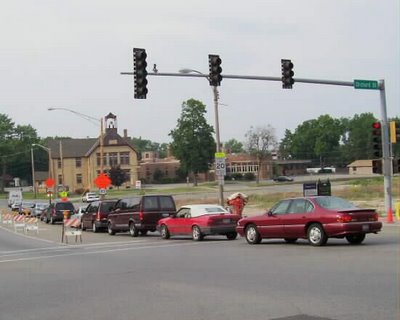 The lineup of cars in front of the vintage schoolhouse is not waiting to clear Wisconsin customs and immigration. The detour sign is correct. Illinois State Highway 83 is one of the few state roads to keep the same number on both sides of the Cheddar Curtain. There is work in progress on Wisconsin State Highway 83, and that is the Wisconsin highway marker you're seeing.

But the barriers are also establishing a detour in Antioch. An art fair is setting up. 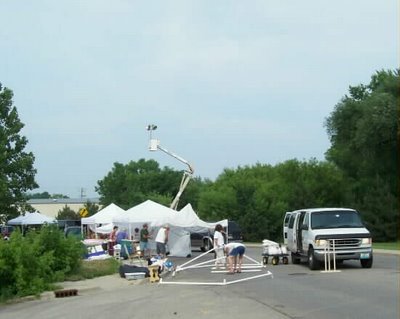 I have witnessed a Mongolian yurt-raising. Setting up an art fair is similar. There may be a senior honors thesis in the evolution of an industry standard here. Go to any Midwestern art fair and you'll see these white pop-up tops. Did some major art fair impose this as a standard for traders, or did somebody bring one of these and everybody else thought, gee, that's convenient?

You did pay attention to all the signs on the high street? 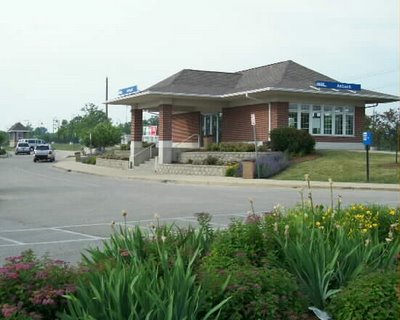 Antioch is the northern terminus of Metra's North Central service, which was recently expanded following extensive double-tracking of the old Wisconsin Central. The coachyard for the service is literally at the Wisconsin border. Had Kenosha not historically been the terminus for the Chicago and North Western's scoots, Metra might have done something similar at Winthrop Harbor.

The stations were designed to look like railroad stations. The placement of the passenger shelter at left, which has lightning rods at each end of the roof, brings to mind the placement of the small signal box at a British country station.

To keep things in the British mode, Train 109 arrived on the west track. 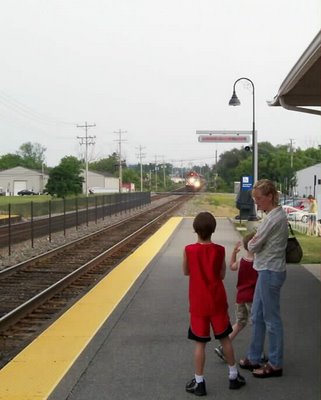 The empty stock proceeds to the coachyard. 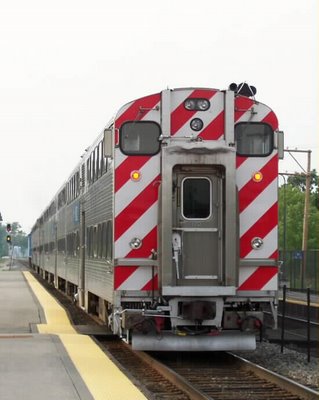 The signal aspect is FLASHING red over yellow. In U.S. signalling practice, red over yellow is "medium approach," meaning "Proceed at medium speed within interlocking limits prepared to stop at the next signal" or something similar. Under fail-safe procedures, a light that fails to flash either does not illuminate at all, a "stop and contact the dispatcher" aspect, or stays illuminated, the "medium approach." So we're looking at an aspect that is not quite as restrictive as medium approach. I must find a new rulebook somewhere.

We are in "two main track" territory signalled for movements in either direction on either track.

The freight trains are not going to stop just because a few commuter trains are leaving Chicago. 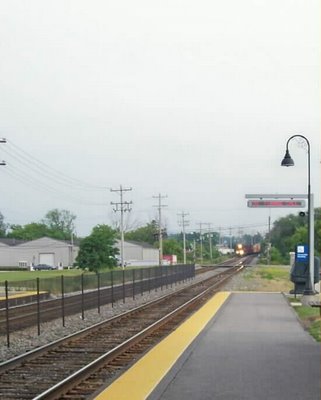 The freight was well toward Burlington, Wisconsin, when train 111, with one of the newer diesels, which I call "Tuckers" after the placement of the Mars light, arrived. 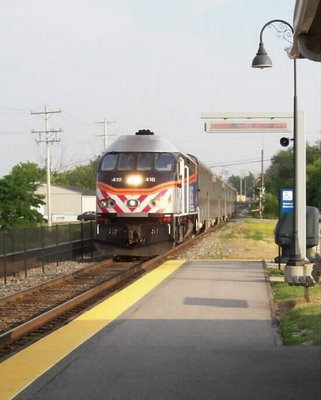 The last train south out of Antioch is Train 118, which, intriguingly, calls only at Lake Villa, Round Lake Beach, and Grayslake, then express to Chicago.

The crew loaded the head car. One of the fringe benefits of push-pull operation is the opportunity to use the window in the coach door for photography. 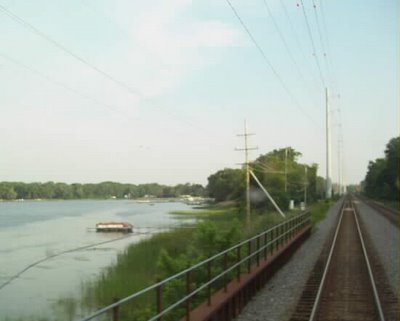 The train passes the west shore of West Loon Lake.

The next lake south is Cedar Lake. (Yes, there are lots of Cedar Lakes in the Midwest. This is probably not the only one in Illinois.) 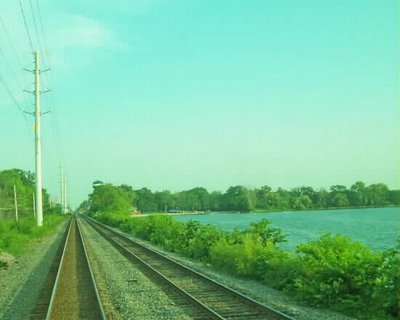 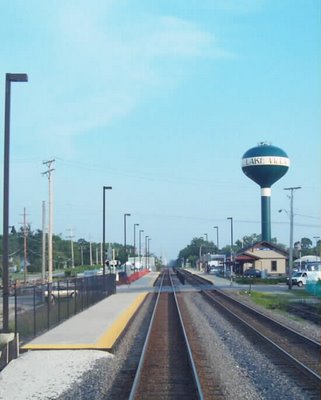 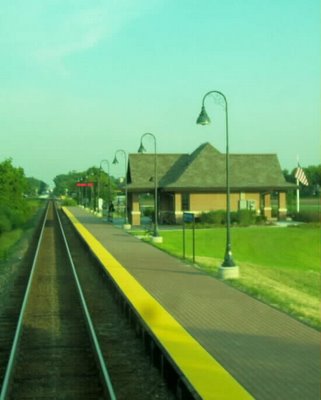 Washington Street, Grayslake, is one of the stations that opened concurrently with the expansion of service. There is as of yet no weekend service on this line. The $5 cheap day return to the beaches would have great play value.

I'm still taming the digital camera. There is a headlight in the distance announcing Train 115.

We're still in the English mode as we meet 115 south of Washington Street. 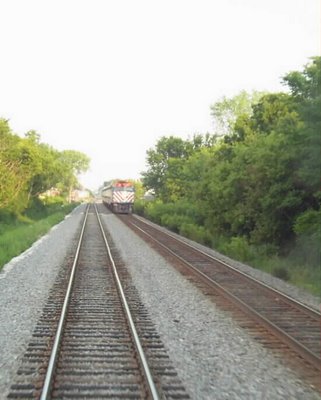 But we're on the east track for a reason. There's a signalled connecting track from the Wisconsin Central to the Milwaukee Road at Prairie Crossing. When I moved to Illinois, this was an automatic country diamond with no connecting tracks. At one time there must have been a tower here. 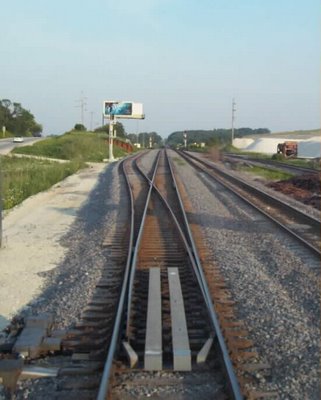 Just ahead on the Wisconsin Central (now CN Rail) is the Prairie Crossing station. There is also a Prairie Crossing station on the Milwaukee Road (now Metra property as far as Fox Lake) about a half mile away. In the old days, there would be a combined station at the crossing. I suspect the rationale for building separate stations at some distance from the crossing is to be able to build shorter platforms and not have the crossing fouled by engines or cars not being opened at the station.

We're waiting for a Milwaukee Road train bound for the Milwaukee's station in Grayslake. 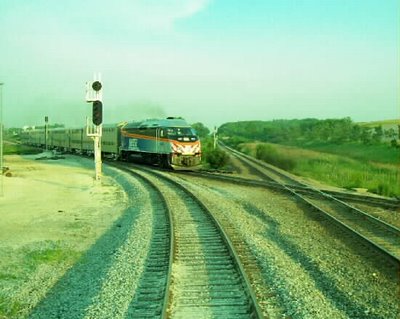 In due course, it shows up, and the dispatcher gives us the road. The Fox Lake line follows a rather curving path through Libertyville.

It joins the C&M at Rondout. 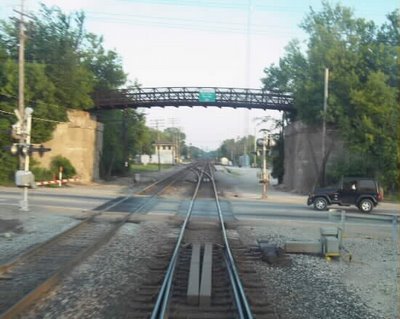 Through the switches, under the North Shore (now Trail; imagine the mountain bikes or a pair of green interurbans), off to the races. 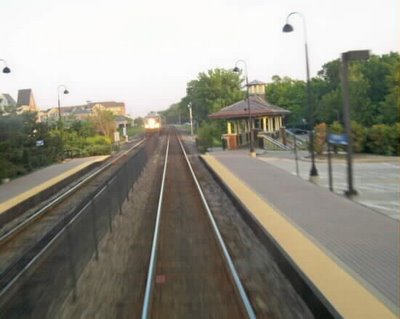 If all is timed properly, Train 118 goes through Deerfield at track speed just before Fox Lake train 2149 shows up. That's a fully illuminated Tucker coming at you.

The Canadian Pacific can get the stacks out behind the scoot without impeding our progress. (Freights coming out of Chicago tend to use the C&NW Freight Main to A-20 south of Northbrook, where a westbound has to cross over to the east track.) 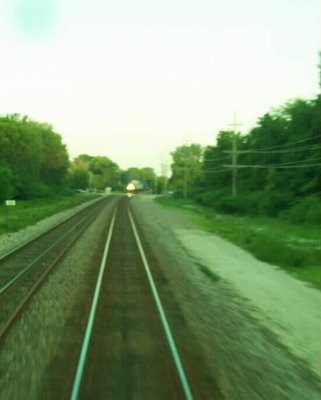 I was not aware that this non-stopper would use the Hiawatha line back to Union Station. There were a few other train enthusiasts out for the ride. They explained that the primary purpose of this run is to reposition a train for the last trip out at night. It is also the fastest train on Metra, maintaining 79 mph from Rondout to Mayfair. The Naperville Zephyrs are limited to 70 mph. 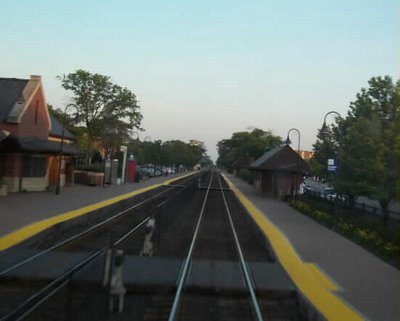 And this train does something that neither the Hiawathas nor the Empire Builder can. Here's Glenview at 79 mph.
Posted by Stephen Karlson at 00:10