Enough with the gloomy news, already! It's the last day of classes and also the evening of the Northern Illinois University open house for the community.

Now that the snow has been cleared away, we can go Currier and Ives at Altgeld Hall. 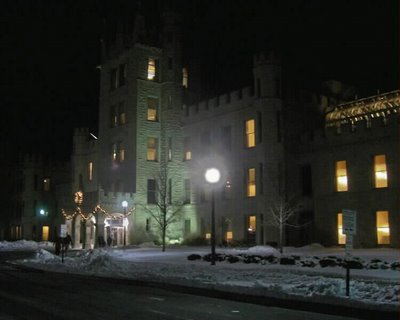 With enough snow, we concede nothing aesthetically to those New England private colleges.

For the adventurous, hayrides were available. Although the wind had damped down, we are still dealing with temperatures in the low teens. 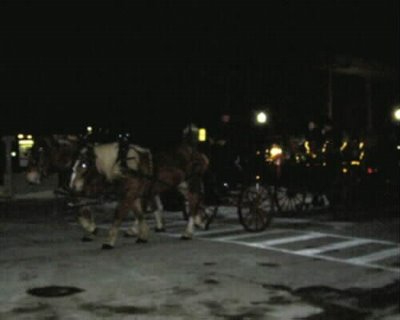 Inside, there's a cake auction in progress to raise money for Hope Haven, the local shelter. That charity is a frequent partner in University activities, for example the basketball teams shot free throws to raise money. 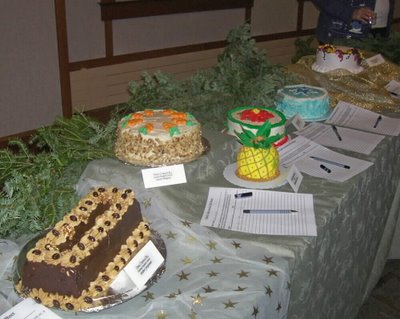 Also on offer: a concert by the DeKalb Municipal Band: some seasonal favorites, some of the band's summer standards -- not surprisingly, several reprises of Northern Illinois Night at the sesquicentennial series, and (illustrated) an improvisational (in the Dixieland style?) Amazing Grace featuring the principal clarinetist, trumpeter, and trombonist. 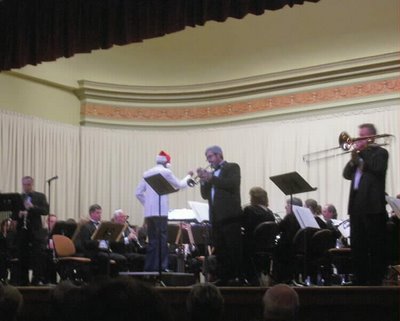 The auditorium has been backdated to its late-1800s ornateness. Perhaps a few detail shots someday. The renovation outside and inside sometimes seemed to drag on longer than the occupation of Germany (wait, there are still U.S. troops in Germany) but the resulting building is a fine setting for public events such as tonight's open house.
Posted by Stephen Karlson at 22:55