GOOD QUESTION. Lynne Kiesling has an extended post, with many links, on the current troubles of the Chicago Transit Authority (see also this unofficial site.) She's got a deeper public policy question.

Simply put: what is the most efficient and fair way to fund and manage existing and future urban rail public transportation? Public ownership and management is not performing well in this case, but is privatization feasible? Or is there more going on than just a simple public/private ownership difference in incentives and performance?

In the case of Chicago, the rapid transit has historically failed to meet expenses out of the farebox, despite the efforts of business titans including Charles Tyson Yerkes, also known as the financial angel behind the Yerkes Observatory at Williams Bay (the dome mechanism makes all the right streetcar noises!) and as the American capitalist for the initial electric lines of the London UndergrounD (the cars would not have looked out of place in Chicago), and Samuel Insull, whose moustache appears in Citizen Kane and whose armchair hosts the Lyric Opera. David M. Young's Chicago Transit: An Illustrated History does not paint a pretty picture of what became the L. Mr Yerkes was able to obtain control of the Lake Street line at distress prices and he had more than a few troubles building his own Northwestern Elevated (today's Howard and Ravenswood services.) It was his idea to build the Union Loop in order to provide downtown connectivity and make the lines more useful. Mr Young hits the high spots of these machinations at pp. 58-62. Even with the Loop, the Rapid Transit system was never a money maker. Mr Young goes so far as to title his chapter on the Insull consolidation of the Rapid Transit with the Chicago Aurora and Elgin and Chicago North Shore and Milwaukee interurbans and with Commonwealth Edison "The Limitations of Private Enterprise." And when the pyramid of holding companies came undone in "The Fall of the House of Insull," Mr Young's interpretation was that the financial troubles of the Rapid Transit were what started it.

But when the Rapid Transit was part of the public utility conglomerate, the combined system was able to get things done a bit more quickly. Consider, for example, the completion of the North Shore Line's high-speed line through the Skokie Valley. Although the North Shore was looking at ways to replace its city street trackage in Wilmette and Kenilworth as early as 1912 (including one plan that would have brought the trains from Kenilworth into Chicago by way of Kimball and the Ravenswood) once it committed to the bypass, the Howard to Dempster section was commenced in 1924 and open in May 1925, and the balance of the line was open in 1926, just in time to serve a Eucharistic Congress in Mundelein. (The connections between the Insull companies and the Roman Catholic Church are material for a future post.) See Bruce G. Moffat's The "L": The Development of Chicago's Rapid Transit System, 1888-1932 for more. (Reviews here.)

Although the private sector rapid transit company might have required a little help from the power company profits to get the work done, its creation of the high speed line is expedited compared to the public management. Sometime in the late 1980s a friend, in making conversation, asked if I was aware the Transit Authority wanted to extend the Skokie Swift to Old Orchard. My reaction: it used to go to Milwaukee. Surprised reaction. No surprise. 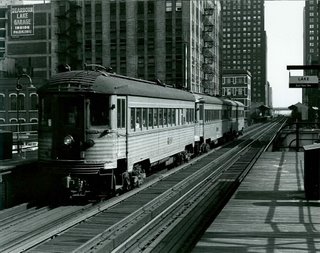 Print from Bruce R. Meyer negative collection
Milwaukee Limited(*) at Clark and Lake, September 1962
In those days, the westbound Lake trains used the near platform.
Chicago Tribune reporters are hailing, finally, progress on the extension of the Swift to Old Orchard, which is at approximately the Harmswoods station, the next North Shore Line express(*) stop north of Dempster.

Talked about for four decades but with nothing accomplished, an expansion of the Skokie Swift rapid transit line could hardly have moved any slower.

Commuters will first see an improvement that was part of the initial 1925 extension, which served both the Rapid Transit and the North Shore.

But with the long-sought addition of a new downtown station on Oakton Street looking like a sure thing, Skokie officials believe the time might have come to extend the Swift, also known as the Chicago Transit Authority's Yellow Line, to a new train station near Old Orchard mall.

The other 1925 stations were at Ridge, Asbury, Dodge, Crawford, and Kostner.

The CTA's last expansion in the North Shore was in 1964, when it began running the Swift on the tracks of the old North Shore railroad, which went bust in 1963 (this sentence as published has been corrected in this text).

Proposals to extend the line go back to at least 1965, Tribune archives show, when the Skokie Valley Transportation Council, an ad hoc committee of North Shore towns, recommended an Old Orchard stop.

The public sector appears to be moving more slowly, but the incentives were different. Prior to the New Deal, power companies and interurban railroads were known to engage in real estate development. I have seen speculation that the North Shore's bypass anticipated such development. I have seen no evidence that real-estate interests backed the extension.

(*)Using the interurban locution, in which a "local" stops anywhere somebody waves a newspaper (flaming at night), an "express" stops only at stations named in the timetable, and a "limited" stops at a limited number of stations.
Posted by Stephen Karlson at 23:15