A PRIMER ON THE SAY AGGREGATION PRINCIPLE.

Reason's Nick Gillespie responds to worries about that vanishing middle class. I'll leave the policy inferences to the reader as an exercise and take this opportunity to address, in formal detail, a canard I have frequently complained about. Mr. Gillespie quotes a well known talking head who could use a primer in the laws of conservation in economics.


There's Lou Dobbs, the CNN host, self-described "lifelong Republican," War on the Middle Class author, and free enterprise fan who has never met a U.S. industry he didn't want to protect or a foreign worker he didn't wanted to deport. He ponders daily why it takes so many families two incomes "just to get by."

I would like to have an answer to that question that does not require a fairly advanced knowledge of economics. Suggestions are welcome. The problem, dear reader, is that the injection of additional productive resources into an economy implies that those resources will produce goods and receive income, either in the form of goods or in the form of claims to goods. Suppose, for the sake of discussion, that additional productive resources get injected into an economy in the form of women. At this level of abstraction, it matters not whether these women come from the ranks of stay-at-home wives seeking some income and some intellectual stimulation, or from the ranks of collegians discontented with the traditional education and nursing majors or with the notion of the M.R.S. degree. What matters is that their presence in the work force affects the potential output of the economy, as well as the equilibrium price ratio. (There are other, less intuitive propositions that are not germane to tonights talk.)

The first law of conservation to keep in mind is an accounting identity we call Walras's law, under which the value of aggregate excess demand must be zero in equilibrium or out of equilibrium. The intuition appears in the figure below: there is a positive excess demand for labor, L, at the current input prices, and a negative excess demand for capital, K, at those prices. The blue arrow indicates the direction of a rearrangement of the same resources at which neither input is in excess demand, and total output of both goods increases. 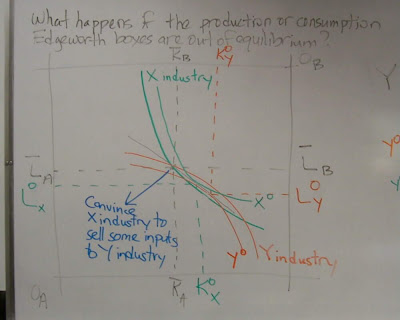 It will also be the case under this accounting identity that the value of excess demand for produced goods must be zero in and out of equilibrium. That's the story in the following figure, in which the existence of excess demand for L implies a smaller total output of produced goods X and Y. Equilibrium in all markets involves identifying and acting on all possible gains from trade, an abstraction that can be interpreted to mean "recognize that women employees have babies." But in or out of equilibrium, the aggregate value of excess demand is zero (do you see my sign error?), or the value of the goods purchased equals the value of the goods produced plus the value of endowments, which includes payment for the use of time female participants have injected into the market. 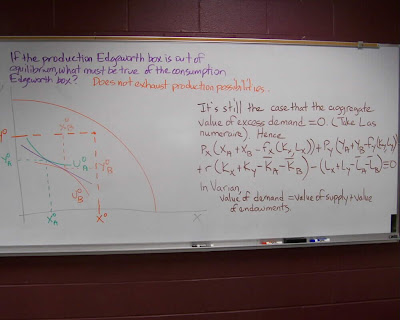 In competitive equilibrium, the accounting identity bites with full force. E. J. Mishan's "Say's Law and Walras' Law Once More," Quarterly Journal of Economics 77, 4 (November 1963: 617-25, on JSTOR) argues that the accounting identity ought be applied only as an equilibrium condition, and that whether it is known as the Say Aggregation Principle or Walras's Law is immaterial as they are the same theorem. See page 623. But what the condition does say is that the value of outputs in equilibrium must equal the value of inputs in equilibrium. Thus, to hope that a family can "get by" on one income with current levels of labor force participation by women is to hope that the laws of conservation in economics don't work.
Posted by Stephen Karlson at 18:14